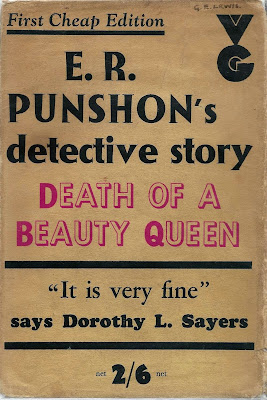 I've been writing introductions for each volume in the series, so I don't want to write too much here about this one title, Death of a Beauty Queen [DBQ] (See Amazon for my full introduction.)

I'll just say that it's an interesting puzzler about the slaying of a beauty contestant and that it incorporates into the plot some unexpectedly serious material about religion.  I strongly recommend it, as did, in her day, Dorothy L. Sayers.  Already by 1935, when DBQ was published, the opinions of Sayers--not only a popular mystery writer but the mystery fiction reviewer for the Sunday Times--had become desirable as book blurbs, as is demonstrated on the dust jacket of Gollancz's "cheap edition" of DBQ.

Gollancz was famous--or infamous, depending on your view--for its so-called "yellow peril" dust jackets, which eschewed illustrative art.  But Gollancz did trumpet prominent endorsements:

However, don't just take my word for it, or even Dorothy L.'s--get it for yourself and see what you think. And don't forget there are four earlier titles in the series available, with five later titles, including The Dusky Hour on the way soon.  All the titles will be available in paper and electronic formats.
Posted by The Passing Tramp at 12:49 PM