He handed her another wet pot.  "Don't look so sad.  I shall try to be a very good mystery writer."

Sigrid smiled.  "Tell me about your plot."

"Actually I don't have one yet," he confessed.  "That's the one drawback.  I don't want to write suspense or thrillers or, God forbid, one of those dreary down-these-mean-streets-a-man-must-go sort of social tracts.  No, I want to write classic whodunits, elegantly contrived puzzles....but that's almost impossible anymore....there are no good [murder] motives left." 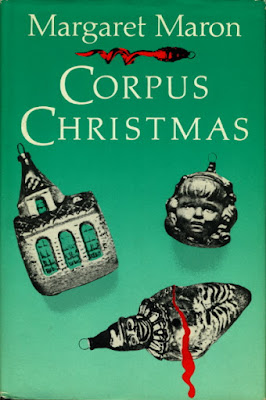 These lines from Margaret Maron's first of two Christmas mysteries, Corpus Christmas, took me aback somewhat, given that I had always assumed, based on the evidence of Maron's much-praised Judge Deborah Knott series, that Maron long harbored loftier literary ambitions for her writing within the mystery genre.

To be sure, the lines quoted above were uttered in the sixth novel in Maron's lesser-known Lt. Sigrid Harald series. Maron's reputation as a mystery writer is largely based on her second series, the one about Deborah Knott, which she launched in 1992, three years after the publication of Corpus Christmas, and ended just this year, with the publication of Long upon the Land. Conversely, only two more Sigrid Harald mysteries followed Corpus Christmas (although Harald appears in a recent Knott mystery, Three-Day Town).

Concerning her decision to end the Deborah Knott series with its twentieth installment, Maron wryly explained to Mystery Scene Magazine:

Several years ago, two close friends and I made a pact. We had watched other authors keep writing about the same character over and over, hashing and rehashing the same material until they debased some of the reputation they had formed with their earlier books.  "If that happens to me," each of us told the others, "Promise that one of you will come and kill me."

Maron added that, after she had made her retirement announcement concerning Deborah Knott, she had received numerous comments from fans "bemoaning the fact that the series has ended" yet thanking her for the "years of pleasure" they had derived from the series. "Some feel as if Deborah and her kin are part of their own extended family," she observed, "and they feel as if there's been a death in the family."

I think this gets to what drives so much modern mystery, be it "cozy," as Maron's Knott series has been described, or gritty, as, say, Ian Rankin's Rebus series has been designated: not so much mystery plots, but the author's evocation of particular people and places.  Whatever we term these sorts of mysteries, they have in common that what draws people in both are the series detective as a character, the setting in which the detective acts and the colorful locals that the detective encounters.  If there's actually a good mystery plot as well, that's a bonus, but it's not a prerequisite.

Mystery readers never became attached to Lt. Sigrid Harald, a New York police detective, like they did to Deborah Knott and her North Carolina kin.  Indeed, easily the least popular novel in the Knott series, judging by Amazon.com reviews, is Three-Day Town (2011), the one book in the Knott series in which Harald appears. A lot of the Amazon reviewers of that novel seem to view Harald as an irksome interloper.  (I should add, however, that Three-Day Town won the Agatha for best mystery novel in 2011.)

Speaking of bling, Corpus Christmas was the only novel in the Harald series to get awards recognition, netting the author her first Agatha and Anthony nominations, yet despite this fact I can only give the novel a lukewarm review as a mostly unexceptionable Eighties American police procedural (of sorts), albeit one with a female lead sleuth. 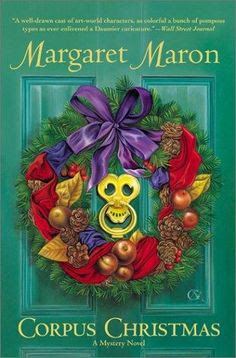 Perhaps it's unfair to the author on my part jumping into a series midstream, but Sigrid Harald did not strike me as an especially interesting or appealing character. Perfectly okay, in short, but kind of meh.  This would not be a problem for me, were Corpus Christmas stronger as a puzzle.  Yet while the novel offers the form of a classic puzzle mystery (more on this below), it cheats readers of its substance.

On page 177 of a mystery of 182 pages, Harald's "subconscious threw up something she'd overlooked till then....The more she thought of it, the surer she became."  Harald then conducts a search of X's abode, finds the murder weapon and the problem is solved.

I'm afraid that I found this rather a unsatisfying approach, in that the mystery might just as easily have been solved on, say, page 82, shortly after the police have been called in to investigate the crime.  In retrospect the intervening 95 pages felt like the author (along with her detective) was simply spinning her wheels until the proper page count was reached.

Admittedly, the "form" of the novel is an attractive one, concerning murder at a Victorian house museum, the Breul House, during the Christmas season. Maron has some interesting back story concerning the original owners of the house, but I wish that more had been done with this. (Even as it is, this aspect of the story is much better than another present-day subplot, which feels like padding.) Additionally, the house museum is the repository of an art collection, which allows Maron to add another dimension of interest to the tale.

As far as the characters in the case are concerned, there was frustration to be found here as well. Harald's older boyfriend, Oscar Nauman, is a famous modern artist who may do a retrospective exhibition at the Breul House; and there's a bit of a love triangle introduced into the story, as Harald, who has only recently learned to use makeup apparently, encounters a dazzling former lover of Nauman's. All this seemed over-familiar to me, however. How often do we encounter in books the plainer (yet still interesting looking) woman who bests her beautiful rival at the game of love?  This story line (and its male correlative) no doubt has its appeal to readers, given that most of us are not beautiful, but it gets rather predictable.

I think the most interesting story line concerns Rick Evans, a young Louisiana-born photographer on assignment at the Breul House, and his relationship with the similarly youthful Pascal Grant, the beautiful but somewhat intellectually disabled handyman at the Breul House. (Throughout the novel Maron lays great stress on young Grant's angelic beauty.)  Yet it's given shorter shrift than it merits and is presented so circumspectly that I still wasn't certain by the end of the novel whether the two were lovers or simply, well, extremely close friends who really enjoy listening to jazz records in each other's company. (Similarly disappointingly, Harald has what I took to be a gay male housemate--the would-be mystery writer quoted at the top of this piece--who flits campily in and out of the story, but doesn't develop as anything other than a caricature.)

Was the author inhibited by the state of this sector of the genre back in 1989 (the novel was published by the Doubleday Crime Club)? Certainly the book won't come out and say, in reference to another person-to-person physical interaction in the story, blunt words like erection and ejaculate and semen, confining itself to cloying, Harlequin-like insipidities such as "the sweet liquids of youth" and "first hot rushes of manhood." 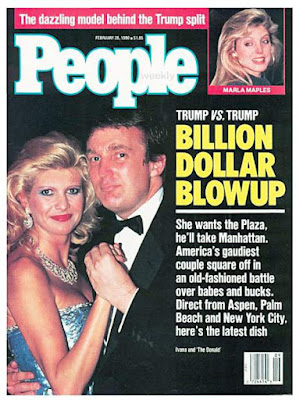 Although Corpus Christmas was published one year shy of the 1990s, already it seems dated in terms of technological references, which shows how far we have come in a quarter-century. However, there was this reference, more topical than ever this year:

"Yes, you might say Oscar Nauman's a painter.  Like Donald Trump's a carpenter or Pavarotti sings a little."

Technology may come and go, but evidently narcissistic People coverboy tycoons are timeless.

Based on my reading of Margaret Maron, I suspect her second series sleuth definitely will outlast her first; yet maybe I should give Sigrid one more go. In the meantime, I'll be taking a look at Margaret Maron's Deborah Knott Christmas mystery novel.

26 December 2011 (Mystery in White, since reprinted by the British Library as we all know)

26 February 2014 (Shooting at Loons, a Deborah Knott mystery)
Posted by The Passing Tramp at 3:35 PM