The awesomely prolific late crime writer Ruth Rendell (1930-2015), produced two dozen Inspector Wexford novels in the half century that spanned 1964-2013, but over her career she also published 28 non-Wexfords, mostly psychological thrillers, under her own name, as well as 14 crime novels under the pen name Barbara Vine.  Rendell's 66th and final crime novel, Dark Corners, was published posthumously late this year and has received pretty good reviews, not only from paid print reviewers, who have tended broadly to praise everything Rendell wrote, but from lay readers, who, truth be told, have been more apt to voice negative criticism of Rendell's work over the last fifteen years.

Between 2000 and 2015 Rendell published an additional twenty crime novels, none of which, of the ones I have I have read, I would really rank with her best, barring perhaps The Blood Doctor, 2002). By the time of her last novel, Dark Corners, the terrain the author explored had become quite familiar, and her books were no longer the same compulsive reading for me anymore, though I made a point of never missing an extension of the author's long-running Wexford saga, where the series characters had become like old friends, the ones where you don't mind it when they ramble on a bit.

As with crime fiction generally, Rendell's novels became much longer in the 1980s and 1990s, compared with her books in the 1960s and 1970s.  From lean, classic thrillers like A Demon in My View (1975), A Judgment in Stone (1977) and The Lake of Darkness (1980), Rendell's novels by the 1990s had become sprawling monsters of 140,000 words or so.  But for me Rendell, in contrast with many other modern crime writers, often makes this length work: her best books are classic page turners, even when there are vast numbers of pages to turn.  So it is the case with A Sight for Sore Eyes, perhaps Rendell's last great psychological thriller. 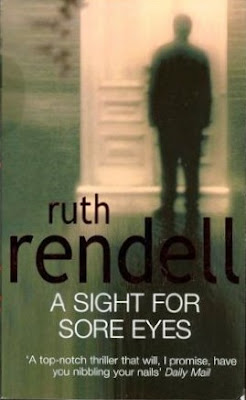 Beginning with books like A Demon in My View and especially The Lake of Darkness, Rendell, like some malevolently crafty Black Widow spider, began crafting creepy crime thrillers wherein she patiently wove together various seemingly disconnected plot strands, gradually entangling her characters in her intricate web of doom.

While I admire the economy with which Rendell accomplished this in her earlier novels, I also appreciate the spaciousness of A Sight for Sore Eyes, which reminds me of some of her richly developed Barbara Vine novels.  In A Sight for Sore Eyes about 40% of the book passes before the two main characters even meet each other, but I didn't mind, because what happened before that fateful meeting was transfixing.

Like a Barbabra Vine novel, A Sight for Sore Eyes has a wide time frame, extending from 1965 to the late 1990s and introducing a large cast of characters who eventually collide with each other, often with most unhappy results for these characters.  At its heart however, Eyes is a book about the horrific consequences of rotten parenting.  The novel's male main character, Teddy Grex--for some reason Teddy Brex in the American edition of the novel--is nurtured, if that's the right word (actually it's really not), by the most horribly neglectful working class parents, while the novel's female main character, Francine Hill, is raised by a maniacally overprotective white collar professional class stepmother and an abysmally weak and inept father.

Rendell showers these parental figures with disdain and for good reason, considering how she portrays them. Her seeming distaste for the English white working (or not working, as the case may be) class, whom she portrays here as feckless, oafish and selfish, reminded me a lot of her portrayal of the same social "types" in Harm Done, the Wexford novel she published the following year. During Teddy Grex's gestation, we, the appalled readers, learn:

His mother had lived on croissants with butter, whipped-cram doughnuts, salami, streaky bacon, fried eggs, chocolate bars, sausages and chips with everything.  She had smoked about ten thousand eight hundred cigarettes and drunk many gallons of Guinness, cider, Babycham and sweet sherry. But [Teddy] was a beautiful child with smooth, peachy skin, dark-brown silky hair, the features of a baby angel in an Old Master, and perfect fingers and toes. 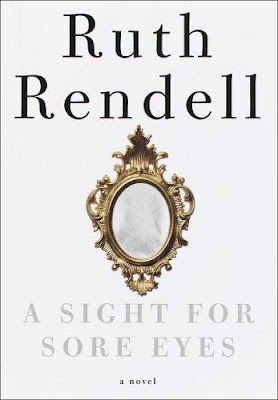 Unfortunately, angelic-looking Teddy Grex grows up a sociopath: a skilled craftsman with contempt for humans but adoration for beautiful objects. Meanwhile grave and lovely Francine Hill survives childhood trauma--the murder of her mother--and the overbearing and oblivious management of her stepmother, an incompetent child psychotherapist ("or as she put it, a paedopsychiatrician"), "whose qualifications were a teaching-training certificate and a diploma from a counseling crash course." Rendell, I must admit, is every bit as biting in her portrayal of Francine's awful stepmother, Julia Gregson, as she is with Teddy Grex's repulsive family.

To be sure, the author directs satire at ill-trained and something less-than-competent psychotherapists. Rendell appears dismissive of the use of doll therapy with children, writing, for example,"Julia had Francine playing with dolls. There was no escaping those dolls, Francine sometimes thought.") However, her criticism in this case seems more focused on one spectacularly obtuse and blundering woman. (Interestingly, Rendell's son is a psychiatric social worker, according to this Telegraph article.)

I don't want to say too much about the novel's plot turns after Teddy and Francine finally meet, but let me just add that there is a denouement that is one of the most disturbingly memorable things in the Rendell oeuvre. Is A Sight for Sore Eyes better than some of her early classic suspense novels? Whether it is or not, it's certainly an important part of an impressive line of crime fiction by Rendell, of which, sadly, we will never see, with her death this year, additional new examples.  Yet at least we can always console ourselves, if you will, with such unforgettably unsettling classics as A Sight for Sore Eyes.
Posted by The Passing Tramp at 9:03 PM