A Short Take on Coles Shorts, Plus a Bit on Henry Wade and The Spectrum of English Murder

Among the copious crime fiction penned by GDH and Margaret Cole (to whom I devote a chapter in The Spectrum of English Murder, currently only $7.50 on Amazon) one finds a long body of short fiction.  Their first short story collection, Superintendent Wilson's Holiday, is quite good, one of the better such collections from the Golden Age, though their later collections have more than a whiff about them of the curate's egg: good in spots, with some hastily written clunkers.

A number of their stories were reprinted in the 1940s, after the Coles had stopped writing detective fiction, by Polybooks, in colorful though ephemeral editions of 64 pages.  Some of these books, or more properly booklets, are illustrated below. 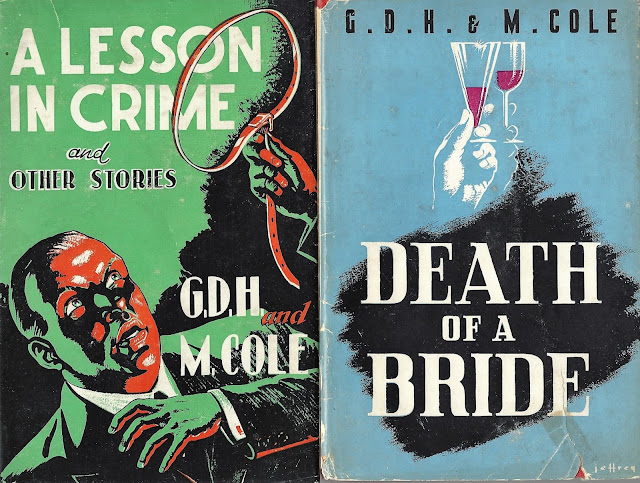 Death of a Bride is a novella, published by Vallancey (an imprint of Polybooks, or vice versa), of the same 64 page length.  It is one of their best works.  "A Lesson in Crime," in which the Coles envision a mad mystery fan's murder of an Edgar Wallace stand-in, is a stand-out.

"Birthday Gifts" is very good.  (I think the woman on the cover with the candle looks rather like Margaret Cole herself.) While "Strychnine Tonic" is not so good, one has to love the cover: it seems the essence of cozy malice domestic. 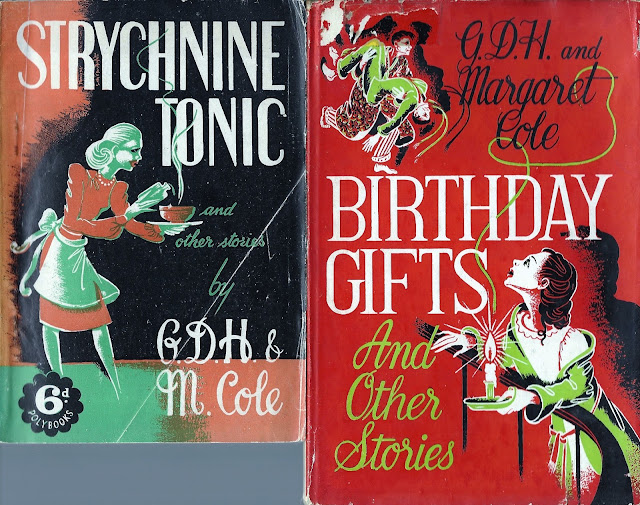 Although recent  efforts to reprint the Coles have stalled, it would be nice if some of these short stories, at least, could be reprinted, perhaps in the British Library anthology series which Martin Edwards edits.

By the way, Spectrum of English Murder also has a chapter on Henry Wade, whose fine body of detective fiction is being reprinted by Orion, though their Murder Room imprint is being shuttered.

Other Coles books reviewed at the Passing Tramp:

Henry Wade, The Dying Alderman and the Great War
Than Hanging Captain (1932)
Posted by The Passing Tramp at 5:07 PM