Down These Mean Lanes a Librarian Must Go: The Widening Stain (1942), by W. Bolingbroke Johnson 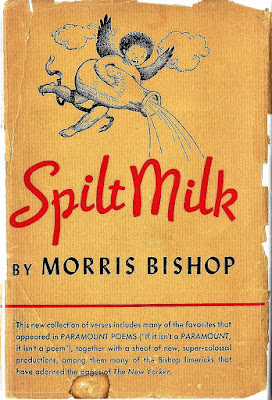 As my previous post indicated, Cornell University romance literature professor Morris Bishop (1893-1973) was not a stereotypical "stern academic" but possessed a wry sense of humor, a quality one finds in such lighter works of his as A Gallery of Eccentrics Or, A Set of Twelve Originals & Extravagants from Elagabalus, the Waggish Emperor to Mr. Professor Porson, the Tippling Philologer Designed to Serve, by Example, For the Correction of Manners & For the Edification of the Ingenious (1928) to his collections of comic poetry, such as Spilt Milk, published in 1942, the same year the author published his sole detective novel, The Widening Stain, under the pseudonym W. Bolingbroke Johnson.

Bishop was a particular connoisseur of the limerick, which is quite evident in The Widening Stain, where one of the professor characters composes limericks throughout the novel.  Bishop included the following limerick in an inscribed copy of The Widening Stain, held at Cornell University Library, suggesting Fame found him out and that he rather tired of the association:

A cabin in northern Wisconsin
Is what I would be for the nonce in,
To be rid of the pain
Of The Widening Stain
And W. Bolingbroke Johnson

To be sure, the author bio for "W. Bolingbroke Johnson" laid quite the false trail for potential admirers, declaring that Johnson was a native of Rabbit Hash Landing, Kentucky, had been employed as Librarian at Okmulgee Agricultural and Mechanical Institute and the American Dairy Goat Association and had published one previous novel, The Jelly-Like Mass.


However Bishop came to feel about the novel, one of the qualities which makes The Widening Stain such an enjoyable novel is the humor.  While not a "screwball" American mystery in the sense of contemporary works by mystery writers Phoebe Atwood Taylor or Craig Rice, Stain has plenteous amusing satire directed at academic life, along with sharp writing and characterization and, last but not least, a most engaging and intriguing mystery plot.

A particularly notable aspect of Stain is its amateur sleuth: Miss Gilda Gorham, Chief Cataloguer of the University Library.  Although on the very first page she briefly ruminates about spinsterhood ("She was rather on the thin-spinsterish side.  That is, if she was exactly a spinster.  When does one become a spinster, exactly?  Thirty-two?  Thirty-three?  Alarming thought!"), Gilda is an impressive picture of a professional woman in mid-century America, not only smoothly confident and capable in her salaried job but a fine moonlighting sleuth as well.

In type and function Gilda is far from American mystery fiction's dithering, romantically pining ingenue heroines familiar from the period in the works of Mignon Eberhart as well as the astringent, desexualized spinsters we find in crime novels by Mary Roberts Rinehart and her numerous imitators.

Within Stain Bishop provides quite a bit of amusing and adult commentary on the nature of gender relationships as perceived at the time. One has to regret that Gilda Gorham only appeared only in a single novel, as one is definitely left at book's end wanting more.

Stain was reprinted in 2007 by the excellent Rue Morgue Press, although oddly the plot description on the Amazon page declares that one of the male professors at the nameless university (presumably Cornell) is the novel's sleuth.  This, unfortunately, simply is not accurate.  (Indeed, this particular professor is one of Gilda's suspects in the two murders which take place in the novel.)  Stain should be reprinted and the correct sleuth attribution made.  It's now one of my favorite mid-century American mysteries and I plan on saying some more about it this week.
Posted by The Passing Tramp at 7:58 PM