Back in the late 1930s and early 1940s the American expatriate writer Anita Boutell was hailed as one of the most promising newcomers in English manners mystery.  A few years ago at this blog I reviewed the author's crime novel Tell  Death to Wait (1939) at this blog, while several other mystery fiction bloggers have reviewed her crime novel Death Has a Past (1939).  See, for example, Moira Redmond's review here, which links another by Martin Edwards.  There is also this review at the Bitter Tea and Mystery blog.

Now Coachwhip has reissued, as a twofer volume, her first mystery, Death Brings a Storke (1938), and her last, Cradled in Fear (1942).  For this volume I have written a 4600 word introduction, "Dance of Death: The Crime Fiction of Anita Boutell." 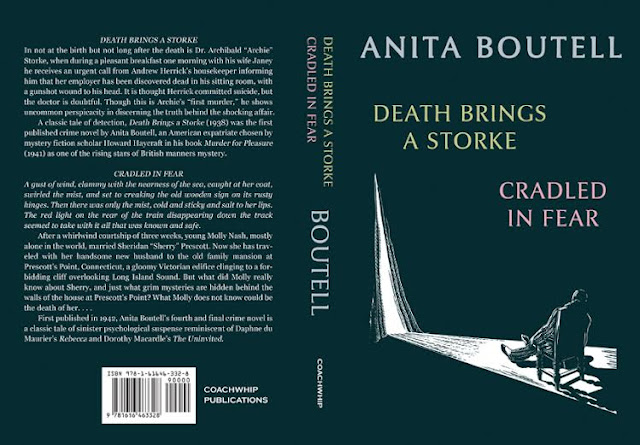 Boutell led a most eventful life during the Jazz Age, witnessing the birth and demise of three marriages between between 1917 and 1931.  Her husbands were all men of literary accomplishment, but her marriages to two of them were filled with strife, catapulting her into divorce courts and newspaper headlines.  Anita Boutell had more in common with Agatha Christie than a fondness for writing mysteries.

Born Anita Day in Newark, New Jersey in 1895, the author was the daughter of businessman Waters Burrows Day and his wife Anne May Burr.  The Day family owned a successful confectionery and catering company with ice cream "gardens" in Ocean Grove, Asbury Park, Morristown and Newark. (One of these gardens, or ice cream parlors, is still in operation today, though no longer under family ownership.) Waters B. Day ran the family's Newark store and when Anita was a teenager he became President of the Newark Trust Company, one of the city's most important financial institutions.

Anita herself, who through her paternal grandmother was related to the author Stephen Crane, possessed an artistic temperament.  Upon attaining adulthood the beautiful, blue-eyed young woman started an aesthetic dancing studio in Philadelphia. Not long afterward, however, she moved to Greenwich Village, New York, where she performed on stage with a theatrical troupe, the Greenwich Village Players, at the Greenwich Village Theatre.

In 1917, when she was 21, Anita wed a young playwright, Patrick Kearney; the couple had a daughter, Monica, two years later. Kearney, who also wrote pieces for H. L. Mencken's The Smart Set, scored his first stage success in 1925 with the play A Man's Man, which he followed the next year with a hugely successful stage adaptation of Theodore Dreiser's novel An American Tragedy.  Two years later he enjoyed another success with a stage adaptation of Sinclair Lewis' novel Elmer Gantry.

Unfortunately, Kearney's marriage with Anita deteriorated as he was rising to great career success. The playwright obtained a divorce from Anita in 1924, citing a dashing decorated Great War veteran and writer, George Alexander Porterfield, as co-respondent.  Two years later Anita, objecting to her ex's plan to take young Monica with him and his new wife on a long trip to Europe (her husband had been awarded custody of the child), fled, with Monica in tow, from her parent's New Jersey home to Pennsylvania's Pocono Mountains.

A furious Kearney obtained a warrant for Anita's arrest on a charge of kidnapping, and the affair made national newspaper headlines in the the early summer of 1926, six months before Agatha Christie's notorious disappearance in England (e.g., "Broadway Playwright Hunting Hills for Child").

After several days Anita resurfaced and a court was able to settle matters between the feuding former husband and wife.  Kearney married two more times, the second marriage ending in divorce and the third in estrangement, and he lost his sizable fortune in the Depression.  He committed suicide in a rented room in New York in 1931, a sad end to a once glittering career.


Anita married her co-respondent in the divorce suit, George Alexander Porterfield, and the new couple moved to England; but this marriage quickly foundered, Porterfield, according to newspapers, being a "Continental playboy" who soon deserted Anita to "play about" on the French Rivera.

(Continuing Anita's marital links to literary notables from the Twenties, Porterfield's mother owned a boarding house in St. Paul, Minnesota which was often visited one year by a young F. Scott Fitzgerald, then writing This Side of Paradise and a friend of another writer staying at the boarding house; while Porterfield's father's second wife was a relation of the writer Octavus Roy Cohen, recently profiled by John Norris over at his Pretty Sinister blog.)

By 1927 Anita, now 32, was keeping company with a handsome recent Harvard graduate, Henry Sherman Boutell, nine years her junior.  Boutell, a grandson of a former US congressman and diplomat and descendant of Founding Father Roger Sherman, was a young man of exceptional scholarly promise, in 1928 publishing First Editions and How to Tell Them, an acknowledged classic among bibliophiles which would go through four editions.

Anita and Henry wed in 1930, shortly after Anita's divorce from Porterfield, who died in Paris the next year. (Like Patrick Kearney, he was 39 at the time of his death.)  Tragically for Anita, Henry passed away as well in 1931, at the age of 26. (One can but conclude that Anita had unusually ill fortune with husbands.)

During their brief marriage Anita and Henry Boutell had settled in London with Monica (retrieved from Patrick Kearney); and Anita remained in England until the outbreak of the Second World War, when she returned to the US, settling in Santa Barbara, California, where Henry's parents owned the Tecolote Bookshop, still in existence today. (Anita remained close to Henry's parents, dedicating one of her novels to them.) 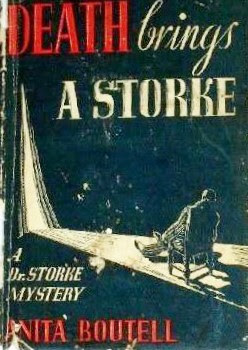 Anita's first three crime novels thus were written in England.  While her first mystery, Death Brings a Storke, is a charming English village tale complete with amateur sleuth in the classic style, her next three books broke away from the traditional mold, being more in the nature of psychological suspense novels (though Tell Death to Wait does present a murder puzzle).

After publication of this last novel, Anita Boutell wrote no more fiction that we know of for the rest of her life, even though she lived for another three decades; and her name was forgotten. However, for several years she was considered one of the up-and-comers of more literary mystery and it is exciting, I think, to see a couple of her books now back in print.  Fans of both traditional detective fiction and psychological suspense should check them out. 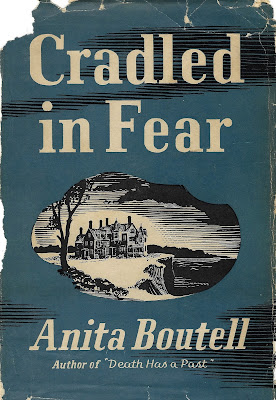 Also, don't forget about Coachwhip's reissue of Katherine Woods' Murder in a Walled Town, a fine mystery I discussed here, which is now available as well.