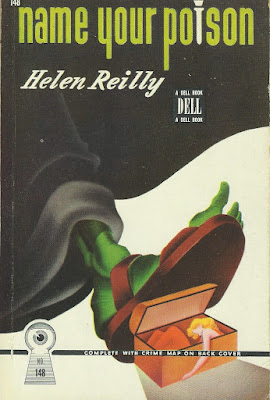 Helen Reilly's Inspector McKee mysteries reminds me considerably of the great American crime writer Mary Roberts Rinehart, in that the plots are quite complex, with a strong dose of love interest.  Not Mignon Eberhart level love interest, say, but still quite a bit of the tenderer emotion.

However, as Mike Grost and others have noted, there also is a good deal of police procedure in Reilly as well, distinguishing the author from Rinehart. Where in Rinehart the narrative tends to focus on a single character (usually a genteel unmarried woman), in Reilly it seems usually to alternate between Inspector McKee and his team of investigators and a female character impacted by a murder case.

Name Your Poison (1942), the fourteenth Inspector McKee mystery, is my Reilly mystery choice for the Tuesday Night Bloggers' grand month of poison.  There are a lot of poison deaths in this one: five to be exact!  There's also a fatal shooting, and another poisoning, though that last one isn't fatal. 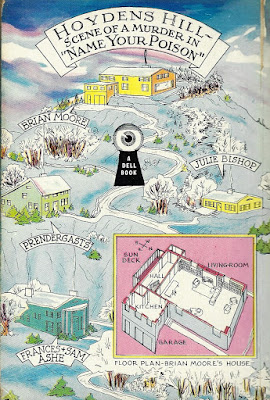 The initial round of poisonings brings about the deaths of four people in New York.  Following how the police connect the dots in their investigation of these deaths makes engrossing crime fiction treading.  Eventually, however, the novel settles down into a classic enclosed location murder mystery at the tiny, privileged community of Hoydens Hill, Connecticut.

When a woman expires one evening in the living room of Brian Moore's Hoydens Hill house (see the back cover of the Dell mapback edition, right) after consuming a cyanide-laced Coca-Cola (!), police suspicion focuses on ten well-born people connected with the little community.

(Incidentally, it seems that there is an internet rumor that drinking Pepsi or Coke while eating Mentos will lead to death from cyanide allegedly produced by chemical reaction, but it has been debunked.)

This is a well-plotted mystery, with a nice twist solution (the second in a row which I have encountered from Reilly), and characters who keep interest in the tale going, even if memory of them doesn't linger as it does with some of the greatest mystery writers from the period.

Most interesting of all to me was a middle-aged married couple, Francis and Sam Ashe, who seem in some ways to be autobiographical, evidently having been drawn from Helen Reilly and her husband Paul H. Reilly, a once nationally-prominent illustrator and cartoonist whose livelihood had greatly diminished after the Depression, making Helen's crime novels the couple's main source of income (see my previous post).

After her husband's death in 1944, two years after the publication of Name Your Poison, Helen Reilly told a journalist in an interview that while it was she, after she started writing, who had made the family's living (the Reillys had four children, all daughters), it was her husband who had made the living worthwhile. 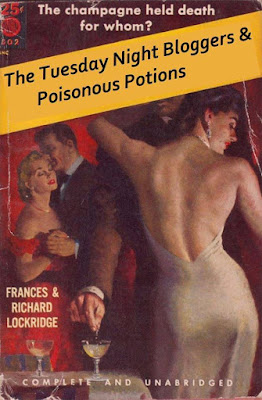 In the novel we learn that "Ten years earlier [1932] Sam had been one of America's foremost illustrators.  New men and new fashions had come up and he had lost most of his markets, but he could still paint like nobody's business."

Interesting, I think!  Incidentally, Name Your Poison is one of the few Helen Reilly novels available in a new, eBook edition.

The next posts here will continue this Reilly family affair, dealing with crime novels by Reilly's accomplished author daughters, Ursula Curtiss and Mary McMullen.
Posted by The Passing Tramp at 6:05 PM