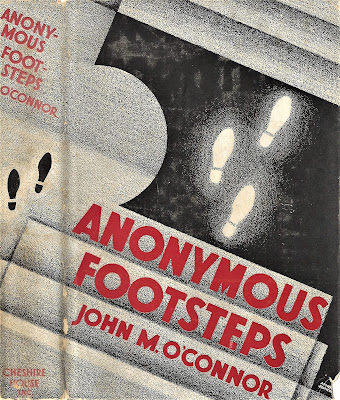 Last week this blog announced the reprinting this month of The Rumble Murders (1932), an energetic, amusing and erudite detective novel by the elder brother of T. S. Eliot, Henry Ware Eliot, Jr. (1879-1947), that is written something in the manner of British authors A. A. Milne (The Red House Mystery), Ronald Knox and Michael Innes.

This week this blog takes a look at another American mystery to be reissued this month, likewise with an introduction by me, this one also originally published in 1932: Anonymous Footsteps, by John Marshall O'Connor (1909-1975).

John M. O'Connor's novel is written in a different style from Rumble, darker and more dramatic, more in the manner of the popular and influential American mystery writers John Dickson Carr and Mignon Eberhart.  The basic setup of Footsteps also will be familiar to the many fans of the very dark and all-time bestselling mystery novel: Agatha Christie's And Then There Were None (1939).

There are, you see, these people stranded on an island, getting bumped off one by one....

The island this time is located somewhere in the Adirondacks in New York state, where at the isolated Lanard mansion ten ill-fated people have gathered: the dying Henry Lanard and his wife, son, brother, sister, doctor, nurse, cook, butler (the latter two a married couple) and chauffeur-handyman.

Even though Lanard is dying, someone murders him in his bed, launching a deluge of death that will claim four additional lives by the end of the novel.  S. S. Van Dine fans will also be reminded of the bestselling author's classic family elimination mystery, The Greene Murder Case (1928). However, here the family members are, as in And Then There Were None, literally stranded on the island, a murderer among them, for a winter storm cuts them off from civilization.


As one contemporary reviewer put it:

No matter whom you may suspect of the murder with which this story opens, the odds are that he or she will be dead before the end of the book.  One after another the members of the Lanard household die violent deaths in their island home in the Adirondacks.  No police are at hand to ferret out the murderer, for a wintry gale has cut off all communication with the mainland.

Anonymous Footsteps is notable as the only mystery to be published by Walter P. Chrysler, Jr.'s short-lived but high-toned publishing firm Cheshire House.  The author of the novel and the son of the great auto magnate were classmates at Dartmouth, where the pair had co-edited the cultural magazine The Arts Quarterly. Both young men evinced great interest in the fine arts.  In addition to his short-lived publishing venture, young Chrysler was a lifelong arts patron, while John M. O'Connor....

Well, that will be the subject of the next post at The Passing Tramp!

Incidentally, both of the detective novels being reissued this month have some great maps and floor plans, something all vintage mystery fans love, I think; and I will be sharing pics of these soon on the blog.
Posted by The Passing Tramp at 7:29 PM