My posting on this blog ground to a virtual halt this Spring after my father was hospitalized with COPD and pneumonia.  He was in hospital, including ICUs, for six weeks and at a rehab center in Holly Springs, MS (insurance vagaries) for a month.  I was only able to get him back him at the beginning of May, where he is making progress.  Of course as you know from reading this blog earlier in the year, my mother also was diagnosed with stage four cancer, so this has not been a good year.  But we just feel fortunate my father made it off the ventilator and into recovery.

Especially when my father was in Holly Springs, I was having to spend a lot of time away from home, and blogging was just out of the question, as I chronicled on my Facebook page.  However, I did have time to do some actual reading of crime fiction and I thought I would give here, now that am here, some short takes, starting with:

Andrew Garve (Paul Winterton, 1908-2001)
Although he published his first crime novel before the Second World War, under the pseudonym Roger Bax, the bulk of Andrew Garve's crime fiction was published in the three decades between 1947 (the Ilesian Disposing of Henry) and 1978 (the excellent thriller Counterstroke).  Until he began slowing down in the 1970s, Garve published a novel every year in that period, sometimes two or three.  He even created a third pseudonym, Paul Somers, to facilitate all his output.

Garve was what Julian Symons called, with perhaps a faint trace of condescension, an "entertainer," i.e., someone who had no pretensions to loftier artistic aims with his crime fiction.

In an earlier era Garve probably would have been a consistent writer of true detective fiction, but, in what might be termed the Silver Age of detective fiction (c. 1941-c. 1985), he more often than not produced crime and espionage thrillers, or what was then ubiquitously termed the "suspense" novel. Still, his books often had enough actual detection in them that they won praise from the great detective fiction purist, the late academic scholar and public intellectual, Jacques Barzun.

My favorite book by Garve remains Murder in Moscow (1951), which Barzun highly praised and Symons liked too but decades later declared had "dated."  Partly it appealed to me precisely because it is dated. It's an excellent picture of the USSR in the early stages of the Cold War, when Stalin still reigned by terror, and it's also an excellently plotted detective novel.  I've yet to read anything by Garve I've liked quite as much.  I'm sure my late blogging friend, Helen Szamuely, must have liked this book very much, for she would have seen Garve as having had his eyes wide open about the true nature of Stalin's Russia, also portrayed in the film Child 44. 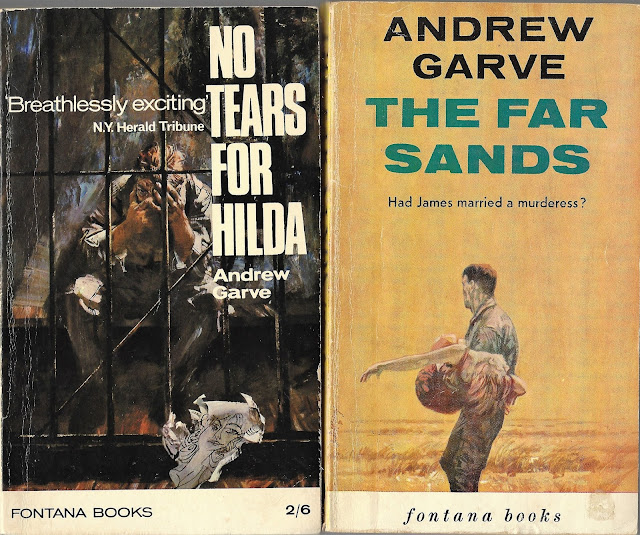 No Tears for Hilda (1950) is another Garve book Jacques Barzun praised, and it was largely responsible for getting Garve into the Detection Club. (I've written about Garve's admission into the Detection Club in my booklet Was Corinne's Murder Clued? but I may write about more here.)  It was nicely reviewed at the Cross Examining Crime blog in January, so I'll just add that on the whole I found the book a bit disappointing.

When housewife Hilda is found dead with her head in the gas oven, police initially suspect suicide, but the husband ends up getting arrested for her murder, and an old war buddy is tasked with trying to exonerate him.  As the old war buddy goes about uncovering the truth about Hilda's nature, the book is quite compelling, and there is plenty of detection; but well before the end of the tale it turns more into a suspense novel, losing its appeal for me.  The book is also dated, though in a fascinating way, as Hilda is repeatedly condemned for her failings as a homemaker.  Poor Hilda, she didn't live to see the "Me" Decade! 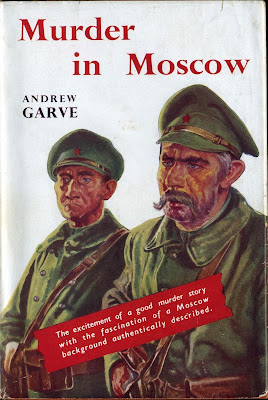 The Far Sands (1960), published a decade later, is cut to much the same pattern as Hilda.  (No one can say that Garve wasn't economical; one of his Paul Somers' novels used the exact same plot as one of his Roger Bax tales, Garve essentially plagiarizing himself.)  In Sands, James Renison weds beautiful Carol Harvey, a twin, whose twin sister, Fay, is married to wealthy Arthur Ramsden.

A shocker lies in store for the seemingly blissfully married James and Carol, when Arthur is found dead, apparently from foul and insidious means, and Fay turns up dead too, evidently having accidentally killed herself after having contrived Arthur's death!

Stodgy James accepts this police conclusion, but Carol does not. Tension ensues as Carol pushes her husband to investigate with her, insisting that Fay could never have done such a thing..

Sands held me in suspense for a while, but when it became clear well before the book was over where things were going I lost interest for the most part.  I couldn't help thinking how much this book resembled a Ruth Rendell story, except that it simply wasn't as good.

I still look forward to reading more Garve though.  One thing I like about Garve, the entertainer, is he kept his books short.  His era admired brevity in crime fiction, while today readers seem to expect their murders to go on forever.  Early Ruth Rendell, I might add, had the brevity of Andrew Garve.
Posted by The Passing Tramp at 6:29 PM