"There is no real security anywhere.  We pretend that there is.  Things like railway time-tables and regular hours keep up the fiction, but behind that little defence life is waiting in ambush.  Let me tell you this much, Mr. Herrington, I am not afraid of death, but life has moments of stark terror for me."

What sort of woman was Mrs. Chance, he wondered. Did she belong to the type who played elegantly with the dangerous passions of men, and was dismayed when reality insinuated itself into the game, and ended it on the crashing realism of death?

"....he was shown into the big drawing-room, where everything was so quiet, serene and impeccably respectable.  "Crime," he thought to himself, "can happen anywhere, but it is much stranger to think of with this kind of background."

"One reads of  a murder and is told that it was first discovered by the man's wife, but of the real drama and the terrible intensity one realises very little.  Yet these things happen...they actually do happen to people one may have met or seen.  If one reads of them in a book one immediately says 'Melodrama,' but the drama of life goes far beyond anything one has ever read."

All the strange secrecy which surrounds the lives of people living in towns was complete here [in Hamilton Street] as elsewhere in London.   Hardly anyone knew who their next-door neighbours were; they were divided by a gulf as wide as though miles separated them, and to this rule, which included almost everyone in Hamilton Street, there was but one solitary exception. 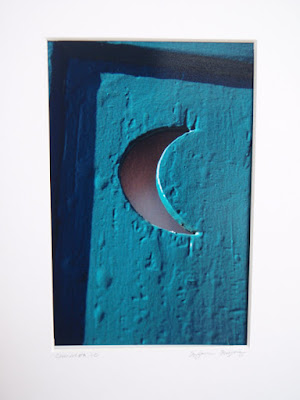 This exception, in Mrs. Victor Rickard's crime novel Upstairs, is Daniel Harrington, a bachelor in his early forties, lately returned, "temporarily crippled," from work on the Gold Coast (then a British African colony, today Ghana). Like Jimmy Stewart's obsessed voyeur character in Rear Window, Daniel spends a lot of his time observing his neighbors, including a beautiful woman who lives across the street, in a house with "outside shutters in which little crescent moons were cut," which "added to the delicate hint of mystery which surrounded her."  Daniel "had seen her several times wearing a close-fitting red hat, which attracted him."

It tantalised him to feel that he could never see the other people in his own house....The opposite side of the street at least gave the objects of his interest a background.  He could not put a window, a door, a garden, or anything whatever, behind the name of Garrett.

Late one night the voyeuristic Daniel espies a a man letting himself into the house opposite and later yet a man and the sometimes red-hatted woman alighting from a chauffeur-driven car and entering the house, the woman seemingly not desirous of having the man accompany her. Daniel falls asleep before seeing anyone coming out of the building.  Unbeknownst to him, a ship of mystery has been launched, which will engulf the lives of a goodly number of people on Hamilton Street and elsewhere.

In the next chapter we learn that Sir Hector Montague has not returned to his home in Shelton Gardens from his visit to a certain house in Hamilton Street, outside of which he had left his chauffeur spinning his heels in his car. (Eventually tiring of this, the chauffeur in a show of proletarian spirit returned to Sir Hector's abode alone.)  Just what has happened to Sir Hector? 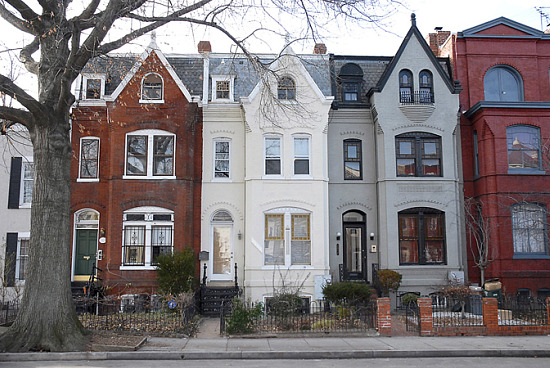 The sense of urban alienation and anomie that Mrs. Victor (aka Jessie Louisa, or "Louie") Rickard captures at times in Upstairs reminds me of the superb crime novels which Ruth Rendell began publishing some half-century later, like A Demon in My View (1976).  What I'm not reminded so much of is detective novels of the 1920s.

For Upstairs is a crime novel too, with a relatively simple mystery but plenty of melodrama, making it more reminiscent not only of modern crime novels but of Victorian mellers.  Emphasis is laid on the characters impacted by murder more than the mechanics of murder investigation, though there is a Scotland Yard inspector and private detective, floridly named Cosmo Rouselle.  Now, there's a name that needed a mystery series to go with it!

In The Golden Age of Murder, Martin Edwards wonders why Ianthe Jerrold and Louie Rickard were admitted to the Detection Club when what he terms "several more gifted and interesting writers," like Philip Macdonald and Josephine Tey, were not.  Of course readers of this blog will know that I think Ianthe Jerrold's detective novels are rather good ones, though, to be sure, there are only a few of them.  Mrs. Rickard presents a knottier problem, however.

Whatever we may think of the merits of Upstairs as a crime novel, as a detective novel (and detection supposedly was the raison d'etre of the Detection Club in those days), it's simply not remarkable. Was Mrs. Rickard really a distinguished detective writer in any meaningful sense, and, if not, why was she invited to become a charter member of the Detection Club?

I think the cases of both Ianthe Jerrold and Louie Rickard, like those of some other early Detection Club members I might name, such as Helen Simpson and Clemence Dane, offer evidence that even in its natal days, the Detection Club was susceptible to the "Great Writer" lure.  One of the reasons Jerrold and Rickard and Simpson and Dane--successful mainstream writers all--were invited into the Detection Club, I posit, was that they had added prestige to the mystery writing genre simply by taking it up for a time and after a fashion.  Even in 1930, mystery writers were sensitive to the charge that theirs was a lesser literary craft, perhaps not true literature at all!