Death Can Be Dynamite: Trio for Blunt Instruments (1964), by Rex Stout 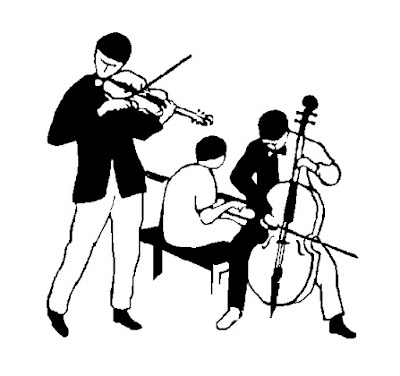 Anthony Boucher, longtime dean of American crime fiction critics, opined that Rex Stout's best productions in mystery fiction after the Second World War were not the Nero Wolfe novels but rather the Nero Wolfe novellas.  I don't know that I agree with this, in fact I'm pretty certain I don't, but I have to admire Stout's mastery of this shorter length, which many people have considered ideal for the mystery form.(See the long detective tales of Arthur Conan Doyle and R. Austin Freeman.)

Some of the Stout novellas are better than others, to be sure, but the quality level of these works is remarkably high, given the author's fecundity for more than three decades.  Of course he had ample incentive to produce these works, as the serializations were quite lucrative! 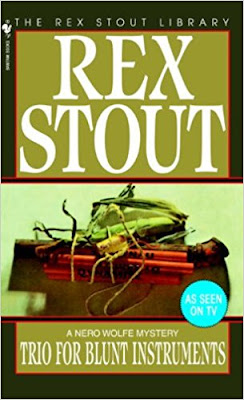 Trio for Blunt Instruments [TFBI], the last collection of Nero Wolfe novellas, appeared in 1964, in between the novels Gambit (1962) and The Mother Hunt (1963) and A Right to Die (1964) and The Doorbell Rang (1965), a time when he seemed to be responding the the times by introducing some more overt "youth" references and political content into his works.  (Heads up: a review of The Doorbell Rang is coming this month, I hope.)

The three novellas in TFBI are Kill Now-Pay Later, which was first published in the Saturday Evening Post in December 1961; Murder is Corny, original to the volume and the last novella Stout wrote; and Blood Will Tell, originally published, two years after Kill Now-Pay Later, in Ellery Queen's Mystery Magazine.

I often hear people dismiss Stout as a plotter--"he's no Agatha Christie," etc.--but a serviceable plot with genuine ratiocination is something I always look for in a work billing itself as a true detective story; and Stout rarely disappoints me in this regard.  He certainly doesn't disappoint in TFBI.

There are few men who would not to like to be told they are the greatest in the world, and Wolfe isn't one of them....

The first novella in the collection, Kill Now-Pay Later, is very much in Stout's classic mid-century mode, with Wolfe pursuing a case involving some high-toned corporate shenanigans.  The first murderee in the novella is Dennis Ashby, vice-president of Mercer's Bobbins, in charge of sales and promotion. He was quite the whiz kid, and had elevated the company's fortunes in the ever-spinning world of bobbin manufacture, but he was disliked by rather a number of people as well.

Ashby dies from a fall from his tenth-story office, though he had been bashed on the head first, which I suppose adheres to the title of the collection, if only barely. 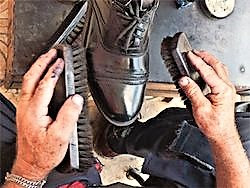 Next to go is Nero Wolfe's shoe shiner, Pete Vassos, who also shined shoes foe the execs at Mercer's Bobbins; he's dead from a fall from a cliff, a suspiciously similar death to that of Ashby. The easily (mis)led police conclude, however, that Pete killed Ashby (believing that his daughter, Elma Vassos, a secretary at the Bobbin concern, had been "seduced"--their word--by Dennis, who had quite the roving eye), then, with the cops closing in, killed himself.

Elma shows up to hire Wolfe to exonerate her father and find his killer (and incidentally Ashby's), touchingly offering all her father's savings from his shoeshine jobs for Wolfe.  Archie warns her, not to get up her hopes, confiding, "It's December, and his tax bracket is near the top": but Wolfe, whose heart is not entirely stone it seems, agrees to take the case--though he glares malevolently at Archie for bringing this doom upon him:

I had let her in, I admit that, but from his look you might have thought I had killed Ashby and Pete and had seduced her into the bargain.

Admittedly, Wolfe later avows that he took the case to spite his egregious series semi-nemesis, Inspector Cramer, but I think Wolfe is a bit softer than he allows.  An interesting aspect of this story is the way it highlights how a "small" man, a hardworking Greek immigrant who believes in the American Dream, is abused both by the corporate world and the police yet finds an avenger in the man he so admired.  Wolfe himself enjoyed talking about ancient Greece with Vassos, though Wolfe did most of the talking on the subject, as he is wont to do.

"Wolfe's line," explains Archie, "was that a man who had been born in Greece, even though he had left at the age of six, should be familiar with the ancient glories of his native land, and he had been hammering away at Pete for forty months."  Later on he wisecracks, "Pete and I would have known each other a lot better if it hadn't been for ancient Greece." 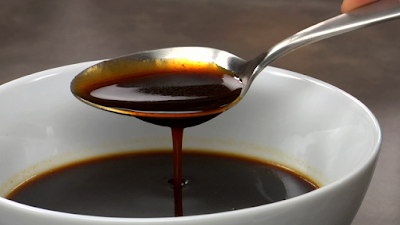 Wolfe finds the solution to the crimes through some solid deductions.  The mystery is fair play and satisfying.  In essence, Kill Now-Pay Later reads very much like a shortened Nero Wolfe novel (one of the better ones) with some nice characterizations (the Vassos father and daughter and the tipsily pithy widow of Dennis Ashby) and good byplay among the crew of regulars, including Fritz, Wolfe's superb and devoted chef, who at one point has to serve as a sort of reluctant hall monitor, if you will, shepherding suspects in Wolfe's brownstone while Archie has been away:

Mr. Wolfe...said to put them in the office and stay in the hall.  I told him I was making glace de viande, but he said one of them is a murderer.  I want to do my share, you know that, Archie, but I can't make good glace de viande if I have to be watching murderers.

A delightful tale.  Read now--You'll enjoy it both now and later.

"Mr. Cramer.  Knowing your considerable talents as I do, I am sometimes dumbfounded by your fatuity.  You were so bent on baiting Mr. Goodwin that you completely ignored the point I was at pains to make."  He pointed at the piles on his desk.  "Who picked that corn?  Pfui!"

"By God.  Talk about stubborn egos."  Cramer shook his head.  "That break you got....You know, any normal man, if he got a break like that, coming down just in the nick of time, what any normal man would do, he would go down on his knees and thank God.  Do you know what you'll do?  You'll thank you...."

Murder Is Corny is the second mystery story concerning corn I have reviewed here. (Make sure you check out the first, since reprinted by Coachwhip.)

This one's the story of the farmer's daughter who implicates Archie in a murder and how Archie gets extricated from Inspector Cramer's clutches--by Nero Wolfe, of course, to whom Archie, it musr be conceded, is even more useful than was Pete Vassos.  It's an enjoyable enough tale, though the suspects are forgettable and the farmer and his daughter much less interesting, I would say, than Pete and Elma from Kill Now-Pay Later. The daughter, Susan McLeod, now a New York model (!), is an amiable egoist played for laughs but, like Archie, I got a bit tired of her. 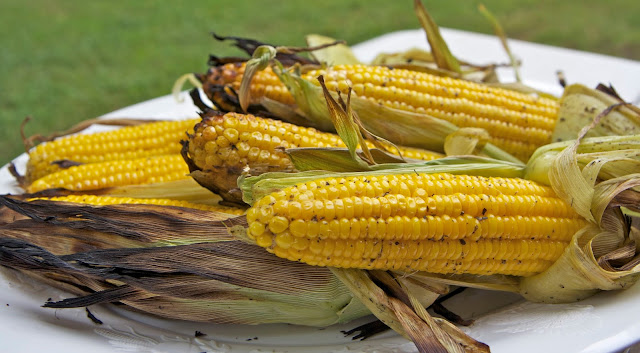 The stand-out part of this book for me concerns, yes, corn.  Farmer Duncan McLeod of Putnam County, New York supplies Wolfe with sixteen just-picked ears of corn every Tuesday from July 20 to October 5; and Wolfe is rather particular about this corn.  Wolfe's following "corny" exchange with Cramer is, I think, one of the best in the series (including novels and novellas):

"Do you eat sweet corn?"

"Does she cook it in water?"

"No.  Millions of American women, and some men, commit that outrage every summer day.  They are turning a superb treat into mere provender.  Shucked and boiled in water, sweet corn is edible and nutritious; roasted in the husk in the hottest possible oven for forty minutes, shucked at the table, and buttered and salted, nothing else, it is ambrosia.  No chef's ingenuity and imagination has ever created a finer dish.  American women should themselves be boiled in water...."

All this superb harumphery leads up to some excellent deductions on Wolfe's part.  This one was televised in the Maury Chaykin-Timothy Hutton series.  The literally explosive climax of the tale is well-suited to television drama. (I'm not giving anything away here, as the image of dynamite mixed with ears of corn has been used on the covers of paperback editions of the book for a half-century now.) 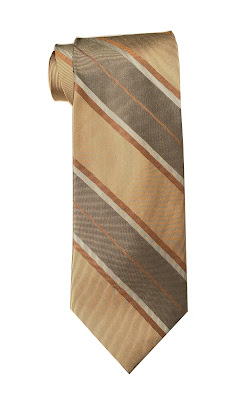 "Pfui.  More people saying what they believe would be a great improvement.  Because I often do I am unfit for common intercourse."

In Blood Will Tell, Archie's receipt in the mail of a bloodstained tie leads to another murder case for him and his boss.  Anthony Boucher proclaimed this possibly the finest Nero Wolfe case since the excellent Prisoner's Base (Out Goes She in the UK), from a dozen years earlier. (At least I presume this is the book of which Boucher was thinking.)

Although the case is rather simply solved, what gives this story the resonance to which Anthony Boucher responded so strongly is the character of a man who is desperately, inarticulately in love and very grateful indeed to Archie Goodwin.  The last two lines pack an emotional punch unusual for the series, paying fine tribute to one of the finest characters in American mystery fiction.
Posted by The Passing Tramp at 12:48 AM