Rhodian left the drive and walked over the beech mast to the great scarp of rock where was the shadowy entrance to the cave, and stood staring a moment before he went inside.  The entrance was a pointed archway in shape--a lancet--but there was no real arch.  The stone had been hewn away to simulate an arch: it gave access to a chamber in the solid rock, some ten feet by eight and perhaps twelve feet high.  There was another lancet cut into the rock at one end of the cave, about five feet from the ground.  Along one side was a stone slab, six feet long, with a hollow at one end--the hermit's bed.  At its head a niche had been hollowed out of the living rock.  Another cavity had been carved out at the foot of the stone couch, forming recessed stone shelves.  In the wall facing the head of the couch a great cross was carved into the rocky wall.  Rhodian stood at the centre of the cave while his eyes grew accustomed to the dim light, green-filtered as it came though the overhanging branches of beech.

Say, there's something fantastic about the place.  It gives me the creeps," he said.  "Do you really suppose anyone lived here?"

"Why not?" Lockersley came into the cave and stood on the dry carpet of leaves which covered the rocky floor.  "I can imagine worse places to live.  It's dry, and surprisingly warm, and utterly peaceful.  Not bad to wake up on a stone bed and look out into the woods, and see the dawn on the lake.  You try it.  It's much more comfortable than it looks.

The stone couch was strewn with bracken and dead leaves and Rhodian sat down on it and looked through the arched entrance to the golden glory of the woods outside.

"All right in summer, maybe, but in winter--no."

"Why not?  A good wood fire--the door and lancet are so arranged that the smoke clears away pretty well," replied Lockersley.  "It'd be a damn sight more comfortable than many a Norman castle....I like it in here.  I understand how the hermit felt in his house.  Safe from the world."
--from Death Came Softly (1943), by ECR Lorac 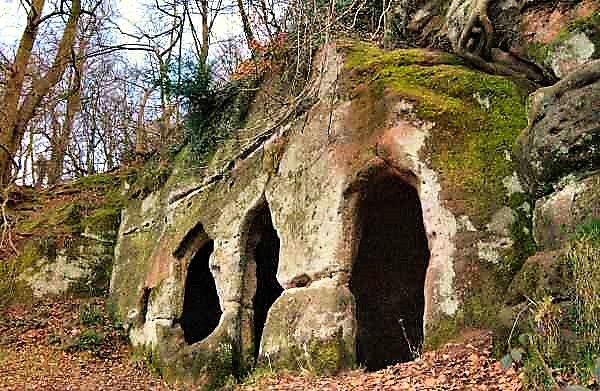 In my recent review of ECR Lorac's Death Came Softly, I mentioned that the scene of the murder of Eve Merrion's beloved anthropologist father Professor Crewdon, menacingly depicted on the cover of the 1943 Collins edition, is a hermit's cave on the grounds of the grand mansion, Valehead House, lately purchased by Eve.  Death Came Softly is set in Devonshire, where a few years earlier ECR Lorac herself (Carol Rivett) had been evacuated from the German bombing of London, but the novel's Valehead House, a  classically symmetrical white Italianate mansion, reminds me rather of Kingston Lacy, in Dorset, of which I included some photos in the review.

For its part the hermit's cave reminds me of the hermit's cave which is located in the Derbyshire village of Dale Abbey, near Nottingham.  Dale Abbey originally was a monastery founded around 1200.  It remained in existence for over three centuries until 1538, when is was dissolved by Henry VIII and mostly demolished.  Little of the abbey remains but the great 13th century east window, although stone from the abbey was pillaged for local construction.

Also in Dale Abbey is Hermit's Wood, wherein is found a hermit's cave and a holy well, no less.  The cave allegedly was fashioned in the twelfth century by a Derby baker, who had a beatific vision in which the Virgin Mary instructed him to lead a contemplative life of solitude and prayer.

The cave was later enlarged in the 18th century by Sir Robert Burdett, who entertained in it.  (I'm guessing this explains those larger openings, which a lone contemplative hardly would have needed.)

Did Carol Rivett have this particular hermit's cave in mind when she wrote Death Came Softly?  Maybe there was another, actually located in Devonshire.  Dale Abbey lies about about 100 miles from Harpenden, Herfordshire, where Carol Rivett's mother, Beatrice, seems to have spent the early war years, before she became a patient at Camberwell House, a private asylum in London.  After the Second World War Carol Rivett lived at her mother's house in Harpenden for a few years before moving to Lancashire.

Whatever the inspiration for the hermit's cave in Death Came Softly, it makes a memorable murder scene; and it also speaks to Carol Rivett's growing fascination with (and spiritual sense for) rural geography, a quality she shared with her contemporary mystery writer and Detection Club colleague John Street.  It's a feeling which grows only more pronounced in her works over the 1940s and 1950s.  More soon! 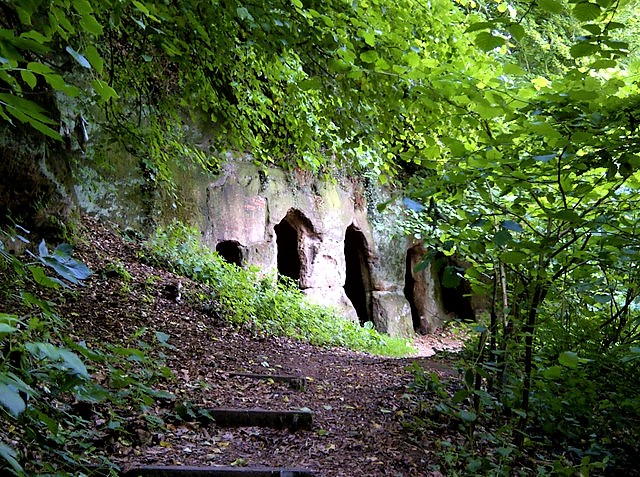 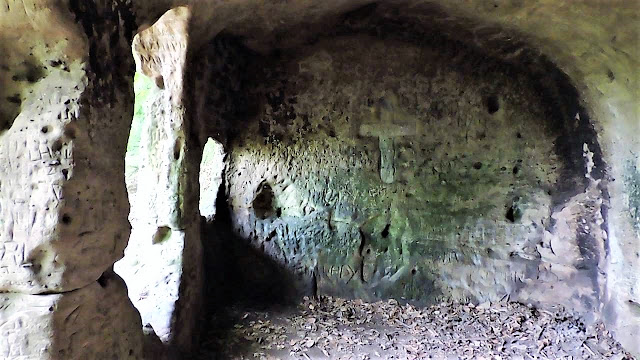 Posted by The Passing Tramp at 4:06 PM