One Fatal Passion and Four Walls: Ursula Curtiss, The Stairway (1957) and the Crime Novel Demeuble 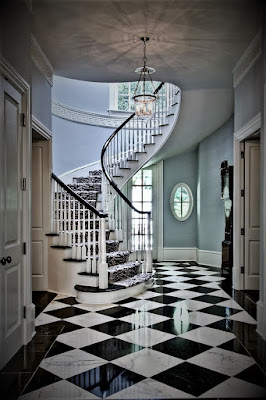 Madeleine Bennett had learned to walk steadily, almost easily, over the small perfect rug she had bought for that one particular spot in the cool marble-floored hall.  The choice of rugs had come down to two in the end, one like a vivid mathematical flame, the other a pale Persian gold, patterned with intricacies in peach and blue.  She took the gold because it was not as reminiscent of the stain it had to cover, the stain left there by Stephen Bennett's violently shattered head.

Thirty-five years earlier the great American author Willa Cather, then near the peak of her career, published a brilliant little essay, "The Novel Demeuble" (aka The Unfurnished Novel, 1922), in which she made the case for concision in literature, the stripping away of extraneous, superfluous detail that allows one, in Cather's view, to get at the artistic heart of the matter:

The novel, for a long while, has been over-furnished.  The property-man has been so busy on its pages, the importance of material objects and their vivid presentation has been so stressed, that we take it for granted whoever can observe, and can write the English language, can write a novel.  Often the latter qualification is considered unnecessary.

How wonderful it would be to throw all the furniture out the window; and along with it, all the meaningless reiterations concerning physical sensations, all the tiresome old patterns, and leave the room as bare as the stage of a Greek theatre, or as that house into which the glory of Pentecost descended; leave the scene bare for the play of emotions, great and little--for the nursery tale, no less than the tragedy, is killed by tasteless amplitude.  The elder Dumas enunciated a great principle when he said that to make a drama, a man needed one passion, and four walls.

Right at the top of her essay Cather distinguishes between the novel as high literature (or "art" as she puts it) and the novel "as a form of amusement":

One does not wish the egg one eats for breakfast, or the morning paper, to be made of the stuff of immortality.  The novel manufactured to entertain great multitudes of people must be considered exactly like a cheap soap or a cheap perfume, or cheap furniture.  Fine quality is a distinct disadvantage in articles, made for great numbers of people who do not want quality but quantity, who do want a thing that "wears," but want change--a succession of new things that are quickly threadbare and can be lightly thrown away.

Does anyone pretend that if the Woolworth store windows were piled with Tanagra figurines at ten cents, they could for a moment compete with Kewpie brides in the popular esteem?  Amusement is one thing; enjoyment of art is another.

Now, don't get me wrong, I am, as it seems I ever have been, a great fan of escapist crime fiction, a field I have no doubt Cather would have consigned to the ghetto of that fiction which provides, as she saw it, merely cheap entertainment to the less demanding and discriminating multitude (though in fact, as I have highlighted on this blog, a goodly number of great writers from Cather's day--such as Eliot, Faulkner and Pessoa--were themselves fans of the fine art of murder fiction).

Nevertheless, I think Cather makes some interesting points that can be usefully applied to crime fiction--though in the above passage she probably was referring not to detective fiction but to popular mainstream bestsellers.*

*(If you ever look at bestsellers from that era, you will see few mysteries but a great many more works of mainstream fiction, most of them long forgotten.)

The distinguished late critic and public intellectual Jacques Barzun has pointed out that the detective novel depends on the investigation of material things and thus has to have the sort of material detail that was disappearing from the modern "literary" novel of that time.  It's what people of the time were referring to when they defended the detective novel on the grounds that the poor reader wanted a little plot in her fiction reading.  Mysteries certainly provide that--in fact they have to provide that to have worth as mysteries.

But there are different kinds of mysteries.  The detective novel of what came to be known as the "Humdrum" school (associated perhaps most of all with alibi king Freeman Wills Crofts and about which I have written in detail in my book Masters of the "Humdrum" Mystery) depended most on lengthy investigations of material circumstance: scatted ash from a cigarette, a soiled glove, a scented handkerchief, a single hair, a torn ticket, a red thumbmark, a railway timetable.

The "manners mystery," associated with such British pioneers of the form as Dorothy L. Sayers and Margery Allingham (Americans such as Mary Roberts Rinehart could be added to the list too), can be similarly lengthy, though in the manners mystery the focus shifts from the examination strictly of the mystery to the exploration of society.  Probably most of the readers of a book like, say, Margery Allingham's The Fashion in Shrouds, are more interested in its depiction of the fashion industry and various love lives than its mystery per se.  The same could be said of Dorothy L Sayers's once controversial Gaudy Night.  On the other hand, readers of Crofts and his confreres, such as John Street and JJ Connington, tended to want to stick strictly to the business of the mystery.

Then there is the amazing Agatha Christie, who was so adept at the streamlined textual mystery, where one has to read ever so carefully to catch verbal slips and cues.  Notably her books tend to be rather light on detailed description, which has led her utterly uncomprehending critics to condemn the "banality" of her writing.  Dorothy L. Sayers may give us a treatise on bell-ringing, PD James may provide pages of detailed architectural description of a church interior; but do they give us better detective novels that those of Agatha Christie?  I think not!  It was Agatha Christie who gave us fatal passion along with four walls in which that passion plays itself out, whether in, purportedly, Mayfair or Mesopotamia.

There is then, I think, such a thing as what we might call, to borrow from Willa Cather, the crime novel demeuble. In particular I think it is suspense fiction, another subgenre in the great house of mystery, which especially benefits from a more streamlined approach.  Case in hand: Ursula Curtiss, mistress of mid-century psychological suspense.

In Curtiss's short suspense novel The Stairway, set in salubrious suburban Connecticut, the cast is necessarily small: Madeleine Bennett, wife of the wealthy and influential--and mentally and physically abusive--Stephen Bennett; their five-year-old son, Matthew; Cora Applegate, a dependent "cousin" of Stephen's; Mr. Sutherland, a playwright neighbor; Janet Vickers, a disgruntled maid; Hayes, a calculating gardener; and, in their lesser but needed roles, doctor, lawyer and police chief.  Yet these characters are quite enough to get to the essence of suspense on the fatal stage on which they strut--a stage dominated by the stairway down which Stephen Bennett takes his terrible tumble, bloodily breaking his head on the attractive black and white tile floor below.

The Stairway could easily have been recast (and lengthened) as a country house detective novel, but in my view it works wonderfully as a tale of suspense, never engaging in longueurs as it takes its narrative twists and turns.  It is the essence of domestic suspense, a term recently popularized by writer Sarah Weinman, with menace conveyed subtly yet sharply in barbed bourgeois exchanges over cocktails and cups of tea; and this quality was appreciated not only by American book reviewers (Anthony Boucher lauded the "delicately shifting tension and suspicion" that "builds to a neatly ingenious surprise"), but by British critics of the time, who still believed that blood on the dining room floor was rather more shocking than a slew of St. Valentine's Day Massacres.

Every now and then a book turns up which replaces the mathematical elegance of the old-fashioned detective novel with a new kind of elegance--a nervous tension,a  tautness of form, a plot whose thrills and suspense grow organically out of the characters.  Such a book is The Stairway by Ursula Curtiss.

See here for a 2012 discussion of the matter of novel length at Martin Edwards's crime writing blog. 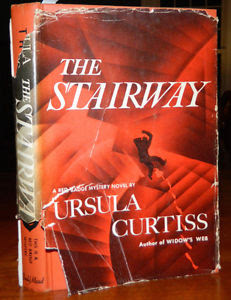 Posted by The Passing Tramp at 2:03 AM