Haunted Houses I: The Second Sickle (1950), by Ursula Curtiss

Seacastle with the vague specter of a killing lunatic at large was becoming more and more unpalatable by the minute.

Detective novels don't have to be scary, of course.  (In fact some have urged that too many chills put a mystery more in the thriller category.)  Yet often they do lend themselves to fright, especially those vintage tales of the "old dark house" subgenre.  English manor houses (preferably snowbound ones) may be de rigueur for Christmas holiday mysteries, yet there's nothing like a decaying Victorian house when one is reading an imaginative tale of mystery during the season of ghoulies and ghosties and long-leggedy beasties--and things that go bump in the night!

Much of Ursula Curtiss's second published crime novel, The Second Sickle (published as The Hollow House in the UK), takes place in an old house (as the English edition highlights), located in one of those moldering Massachusetts harbor towns that I always associate with HP Lovecraft's lurid shockers.  (Such a locale was admirably evoked in Jonathan Stagge's tricky and eerie The Scarlet Circle, which I reviewed for Hallowe'en five years ago.

American crime fiction critic Anthony Boucher, who highly praised both Curtiss's first crime novel, the prizewinning Voice out of Darkness (1948) and her third, The Noonday Devil (1950)--also lauded by Julian Symons and, well, modest and shy me, see here--saw The Second Sickle as a case of sophomore slump, condemning it for "conventional hackery."  This may be a bit hard on the book, but by Curtiss's standards I too think it's a disappointment. 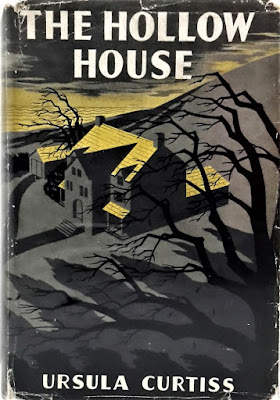 Certainly The Second Sickle has milieu going for it, what with Seacastle, the isolated old port, and that creepy, nearly empty (or "hollow") house and--let's not forget this old standby--an escaped maniac, a sickle murderer no less (axes had already been done to death in Massachusetts, you must admit), and formerly a most unwilling inmate of Bellemarsh Sanitarium, "a huddle of antique wooden buildings on an otherwise deserted spur of Seacastle Point."

Victoria Devlin, twentyish (I'm guessing 26) New York career gal, is staying at the old family home of her onetime school friend Lilac Thall, who persuaded Victoria to cover for her while she, Lilac, left Seacastle for the weekend on her own mysterious private errand.

Victoria is staying at the house with a devoted former family servant, Nurse Corey, who dutifully carries "trays of frothy eggnog and homemade beef broth and slender golden points of toast" up the stairs to the top of the house (where Lilac supposedly is temporarily bedridden), "only to consume them herself in the emptiness of the third floor sickroom."

Unhappily for Victoria (not to mention herself), gaunt Nurse Corey soon is most violently and fatally dispatched with a sickle, having tragically become the third victim of the escaped lunatic--or is she????

It's made sufficiently clear to readers at the beginning of the novel that this is not a really a serial killer novel, that the murderer of Nurse Corey is just using the serial killer as cover for his/her own privately motivated crime.

The first part of the novel, when the maniac is still at large, is definitely unnerving; but gradually, as Victoria moves back and forth from Seacastle to New York (for an innocent person the young woman has a remarkable propensity for discovering bodies, by the way) and mystery backstory accumulates (and accumulates), that uneasy feeling attenuates.

I'm afraid that I found myself losing interest in the matter of the killer's identity, and unfortunately the suspense/terror element paled into predictability as well.

There's love too, of course, though here it feels rather forced, an obvious concession to the presumed predominant readership of the novel.  I agree with Boucher that The Noonday Devil is a marked improvement over The Second Sickle, though in my view Curtis's best books came later in the 1950s and the early 1960s, as she ruthlessly streamlined her plots, turning them into models of mid-century craftsmanship.

Some of Curtiss's later, better novels are only about 50,000 words in length.  Compare that to the 75,000 words in The Second Sickle, where the pace feels lumbering by comparison.  Readers today, who are used to behemoth crime novels of 150,000 words or, the good Lord help us, even more, may not believe it, but brevity truly is the soul of suspense.  Death so often doesn't tarry-- why do so many modern crime writers?

Posted by The Passing Tramp at 4:08 AM