Thou shalt not be afraid...Of the arrow that flieth in the day, of the business that walketh about in the dark, of invasion, or of the noonday devil.

Tradition calls acedia the "noonday devil," for like a demon that attacks in the light of the day, it comes when we least expect it, and it is difficult for its victim to recognize it....acedia manifests itself as a temptation for a monk to depart his cell.  This temptation is often worst around midday.... 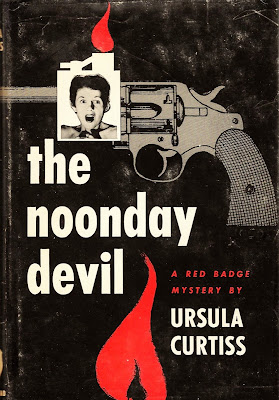 The Noonday Devil, Ursula Curtiss' third crime novel, received much praise when it was published in 1951; and it was singled out for commendation over two decades later by British crime writer and critic Julian Symons in his genre survey Bloody Murder as a fine example of what he dubbed the "women's [crime] novel."

That of Curtiss' "women's" novels Symons selected the only one (of which I'm aware) with a male protagonist seems telling, but the fact that Symons mentioned Curtiss at all, given his dismissal of a number of women suspense authors in Bloody Murder, suggests the esteem with which the crime writer was once held in the UK as well as the US.

When Ursula Curtiss published The Noonday Devil she had been married for four years. She was Ursula Reilly--daughter, as readers of this blog of course will know (or may well have known already), of crime writer Helen Reilly--when in 1947 she wed John Paul Curtiss, Jr., son of a prominent advertising executive. 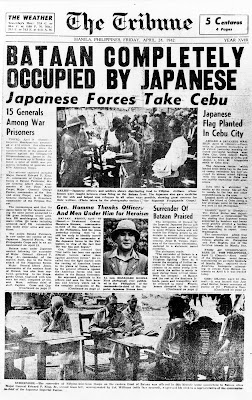 Having prepped at Choate, John graduated from the Sheffield Scientific School at Yale University and worked, before the Second World War broke out, for radio producer and writer Doug Storer.

John was serving as a lieutenant colonel in the U. S. Army field artillery in the Philippines when Japanese forces attacked in January 1942, not long after the bombing of Pearl Harbor.  Several months later the beleaguered soldiers of the USAFFE (United States Army Forces in the Far East) surrendered to Japan.

The Japanese transfer of American and Filipino soldiers, accomplished by means of a brutal sixty-mile trek on foot known as the Bataan Death March, resulted in the deaths of thousands of prisoners.

John Curtiss survived not only the Bataan Death March but three and half years in Japanese prisons. His wartime experiences clearly informed his wife's third crime novel, where the protagonist, Andrew Sentry, investigates the strange circumstances of his brother Nick's death six years earlier at a Japanese prison in the Philippines.

Reminiscent of John Curtiss, Nick Sentry in The Noonday Devil was a captain in the field artillery, but he was executed for trying to escape from his confinement.  What Nick's brother, Andrew, learns to his shock one rainy night in a New York bar (where he has stopped for a quick bourbon old-fashioned) is that Nick's execution may have been engineered by another American prisoner,  a mysterious individual named Sands, about whom Nick may have known a deadly secret.  Andrew resolves to get to the truth, even in the face of Nick's seemingly faithless former fiancee, Sarah Devaney. 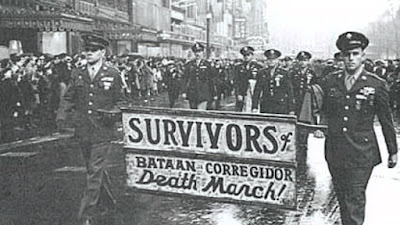 The Noonday Devil divides neatly into halves, the first half rather resembling a noir tale by Cornell Woolrich (I was particularly reminded of Phantom Lady), with a driven protagonist grimly pursuing elusive answers and gradually realizing that he is facing a remorseless unseen enemy, a player on the other side, determined to check him at every point, even if that means resorting to murder.

In the second half of the novel shifts in setting to a small New England town and takes on resemblance to more typical Fifties "domestic suspense" novels (what Julian Symons called women's novels).  Perhaps this second half is a little disappointing, but if so only because the first half raises such high and fearful expectations. (The ending comes off as a bit pat, I think.)  But nevertheless Devil is a fine Fifties crime novel, one that made amply clear at the time that Ursula Curtiss already had become a master of suspense writing.  Recommended.
Posted by The Passing Tramp at 4:51 AM