The 2015 film Child 44, based on the 2008 crime novel of the same name by Tom Rob Smith (the first installment in a highly successful book trilogy), was released in the US in the third week of April and closed a month later, having earned a little over 1.2 million dollars.  Worldwide it fared better, though not greatly so, making merely 11.7 million dollars.  Having a budget of 50 million, the film's less than 13 million in box office receipts guaranteed it the status of a cinematic bomb, seemingly validating the poor reviews the film received. (It scored only a 41 out of 100 on Metacritic.)

Yet Child 44 from dozens of user reviews averages a 6.5 of 10 on imdb, the international movie database, and a 3.8 of 5 on Amazon--admittedly hardly masterpiece level, but certainly better than the critical consensus.  Being a fan of the film's star, Tom Hardy, I decided to give it a try.


Tom Hardy has done his share of genre films in his still ascending film career: Inception (a heist film at its intricate Chinese puzzle box heart); Tinker, Tailor, Solider, Spy (based on the classic John le Carre spy novel); Lawless (about Depression-era American bootleggers); The Dark Knight Rises (where he played arch-villain Bane, doubtlessly his most famous role worldwide); Locke (a suspense film of sorts, for which he won best actor awards from the Los Angeles Film Critics Association and the Toronto Film Critics Association); The Drop (adapted from a Dennis Lehane short story and reviewed by me here); Mad Max Fury Road; and Legend (about an infamous and eccentric pair of British twin brother gangsters).  And that's not to mention his recurring role in the quirky British television crime series Peaky Blinders. Hardy received his first Oscar nomination this year for his role as Leo Dicaprio's nemesis in the much-lauded western epic The Revenant.


Child 44 certainly has a stellar cast.  In addition to Hardy, there is the brilliant Gary Oldman (who starred with Hardy in Tinker and Legend), Noomi Rapace (Hardy's female co-star from The Drop and the star of the Swedish film adaptation of Stieg Larsson's mega-bestselling Millennium Trilogy), Joel Kinnaman (who just popped up in Suicide Squad), Paddy Considine, Vincent Cassel (a memorably loathsome Russian gangster in Eastern Promises and son of Jean-Pierre Cassel, the noted French actor who played the railway porter in the 1974 film version of Agatha Christie's Murder on the Orient Express) and Charles Dance (a great British veteran thespian who is all over the place right now, including very recently in the latest adaptation of Agatha Christie's And Then There Were None, in a role he seems to have been born to play).


Like the novel, the film is loosely based on the real-life case of Andrei Romanovich Chikatilo, a Soviet Union serial killer who was executed in 1994 for the murders of over fifty women and children during an appalling dozen year slaying spree that took place between 1978 and 1990.  (A much more faithful 1995 television film, Citizen X, also was based on these events).

Author Tom Rob Smith took the kernel of the story of the Chikatilo murders and moved them from the Brezhnev and Gorbachev eras back to the Stalin era.  (The murderer Chikatilo was born in 1936 and experienced great hardship as a child in the famine and war plagued then Soviet Republic of Ukraine.)  Much lauded and a big seller, Smith's novel quickly drew interest from filmmakers, including Ridley Scott, but it took seven years for a film to come together, and then unsuccessfully so, at least in the eyes of most critics.  Why the critical disdain for the film version of Child 44, when the novel was so well-received?


Most of the critical reviews derided the film as an insufficiently thrilling thriller. (Additionally the film was never shown in Russia and several former Soviet republics, on account of its having been deemed excessively negative in its depiction of the Stalin-era USSR.)  I think there is some justification to this charge of insufficient thrills, though I also believe that the film, taken on its own terms, has considerable merit.

Briefly, Child 44 tells the story of the travails of Leo Demidov (Hardy) and his wife Raisa (Rapace) as Leo with Raisa's help struggles to investigate a series of murders of young boys during the waning days of the Stalin regime.  Leo, who was orphaned during the Ukrainian famine and as a soldier became a propaganda hero of the Second World War (he was photographed planting the Soviet flag atop the Reichstag), is a captain in the MGB (Ministry of State Security), tasked with hunting down enemies of the state, but in the manner of Tom Hardy characters, he is morally conflicted, as he sees the horrific abuses and moral crimes committed in the name of the state (in some of which he is complicit).  In the case of the child murders, Leo's superiors do not accept that such western decadence is possible in the USSR, so his attempt to get at the truth is stymied.


Eventually Leo's and Raisa's fortunes take a drastic downward turn, as Raisa, a sensitive schoolteacher, is denounced as a subversive and the couple, Leo standing by her, finds themselves exiled to a remote city, Volsk, run by General Nesterov (Gary Oldman).  But the string of brutual child murders follows Leo to Volsk and he is left trying to solve them while he himself struggles to survive.

I think where Child 44 succeeds well is in its portrayal of life in the Soviet Union under Stalin. Some Russian authorities were vocally offended by the film, but then these seem to be the sort that naturally would be.  To be sure, some western critics, not special pleaders, criticized the film for being grey and drab; but, I ask you, just what was life like then for a lot of people?  One would not expect life in Nazi Germany to be portrayed as jolly, why life under Stalin? Despite criticism of the film's use of Russian accents by its largely non-Russian cast, the performances are excellent, especially Hardy's and Rapace's, with Paddy Considine also being quite memorable in an underwritten part. (Many of the parts feel underwritten, including Oldman's, sadly.)


As a mystery thriller the film does disappoint somewhat, in that the murder investigation feel too peripheral to the film.  Regrettably, I have not read the book, but I imagine it must have been more successfully integrated.  In the middle of the film, the identity of the killer is offhandedly revealed, so people expecting intriguing mystery will be disappointed. But as a compelling picture of a time and place with strong acting, Child 44 deserves recommendation in my view. Sadly, the film ends leaving a clear expectation of a sequel, one we likely will never get now.  I couldn't help thinking what splendid characters Leo and Raisa would have made for a television mystery series, a sort of Soviet Wallander. 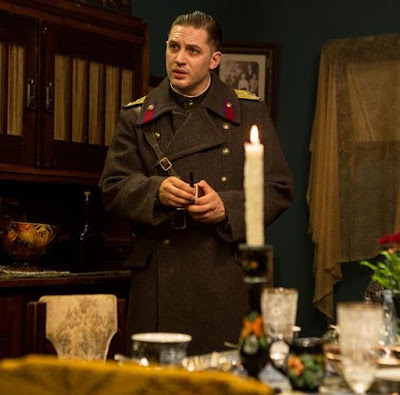 Posted by The Passing Tramp at 1:36 AM