When Babson's first crime novel--an amusing tale of detection called Cover-Up Story (more on this novel to come)--appeared in 1971what had come to be considered "cozy" British crime fiction was still being practiced by some of its original innovators, including the seemingly imperishable and indefatigable Queen of Crime herself, Agatha Christie, who that year published the beguiling Nemesis, the last of the Miss Marple mysteries she was ever to write. In truth Christie was very near the end of her writing life, with just two more newly-written books to come: the sadly rather dire Elephants Can Remember and Postern of Fate.

The slightly younger New Zealander Ngaio Marsh, whose American publisher in the Seventies was pugnaciously  touting on editions of her books a critic's aside that "she writes better than Christie," took a year "off" in 1971, but Marsh would be back the next year with a Christmas country house concoction--a rather synthetic one, in my view, like stale eggnog out of a carton--called Tied up in Tinsel.  However, newer, younger writers were coming along to spice up ye olde British cozy.  (And, don't get me wrong, I like a few of the Marshes from this period--review soon, I hope!)

Marian Babson's 45 crime novels often are sweepingly consigned to the "cozy" category, but this label, which has been used to encompass writers as diverse as Christie, PD James and MC Beaton, can be misleading.

Over her long writing career, Marian Babson produced different types of mysteries: manners mysteries in the classic style, more broadly humorous tales, tense suspense, some grim melodrama and in the later phase of her career, cat cozies. I used to frequently see Babson's works in Baton Rouge used book shops in the 1990s, when I recall reading and enjoying The Twelve Deaths of Christmas and Death Beside the Seaside, to name two I recollect.

Since then Babson's books seem to have gone entirely out of print; yet I don't believe that this is due to a lack of popularity.  In her later years the author, once a mainstay of the lending library circuit (for which she was honored by the Crime Writers Association), may not have been able properly to manage her estate.

Two years ago Babson made the British and internet news when it was learned that the octogenarian author, wheelchair-bound and suffering from dementia, had been victimized by her caregiver, who had looted 27,000 pounds from her account.  Babson eventually tumbled to the fact that a very large sum of money was missing, and she contacted the police herself.  Her uncaring carer was arrested, tried, convicted and sentenced to a 14-month term of prison, but since then Babson's health unfortunately continued to fail.

As crime writers Martin Edwards and Dean James have attested, Marian Babson was a beloved member of the mystery-writing community, a stalwart at conventions, longtime secretary of the Crime Writers Association and a member of the Detection Club; but not a great deal seems to have been known about her personal background, even by her colleagues.

Most of Babson's mysteries are set in the United Kingdom, though the author was in fact an American by birth. Invariably it is stated that Babson was born in 1929 in Salem, Massachusetts, cite of the notorious 17th century "witch" trials. Babson indeed was born, according to my research, on December 15 of that year; yet in 1930 her family was living about 20 miles away from Salem, in Rockport, a fishing town and artists' colony located on the tip of a peninsula directly east of the port of Gloucester, a place with long associations with many of Babson's ancestors.

Babson's real name was Ruth Marian Stenstreem, the author having drawn her pseudonym from her middle name and her Babson family line, which came down through her paternal grandmother.  Her parents were Earl and Catherine (Coyne) Stenstreem. Marian appears to have been an only child.

Earl, a gardener, was the only son of Charles Stenstreem, Jr, who died not long after his son was born (early death formed a common pattern among the men in Marian's family), and Alphonsa Babson.  Charles, a ship caulker, was the son of Charles Stenstreem, Sr., a fishing boat captain who was lost at sea  in 1890, and Hulda Hanson, both of whom were Swedish immigrants.

Marian's mother, Catherine Coyne, wove another strand into the author's ancestral tapestry: she was a daughter of Patrick Martin Coyne and Mary Dever, who hailed from, respectively, the highly euphonious Irish communities of Doocastle, County Mayo and Letterkilley, County Donegal. Patrick Coyne, who arrived in the US as a teen and was naturalized in 1893, was a successful painting contractor who with his family resided in Salem at a splendidly situated Victorian house overlooking the ocean that Patrick and Mary crossed to reach America.

Marian, who after the Second World War visited Ireland, made use of an Irish setting and Irish issues in at least one of crime novels. 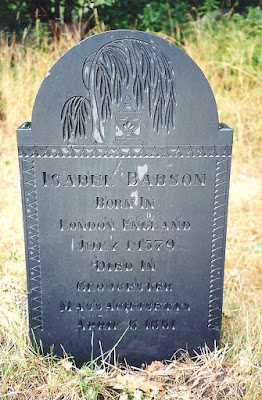 While three of Marian's grandparents--Charles Stenstreem, Patrick Coyne and Mary Dever, thus were descendants of nineteenth-century immigrants to the United States, the American ancestry of Marian's remaining grandparent, Alphonsa Babson, went all the way back to 1637, when the middle-aged widow Isabel Babson (1579-1661) arrived with two sons in Salem from Wookey, Somersetshire in 1637. (Yes, you might say the Babsons were Wookies.)

Marian was a tenth generation descendant from Isabel.  Her paternal grandmother, Alphonsa Babson, was a daughter of Alphonso Babson, a fisherman who was drowned off his dory with another fisherman off the aptly-named Folly Cove in 1877, when he was but 37 years old, and Lucy Pool Hopkins.  (Thus both of Marian's paternal great-grandfathers went down to watery graves.)


Alphonso's father, Gorham Babson, was a prominent Gloucester merchant and shipowner and member of the Universalist Church (meaning he was a believer in universal salvation), as well as a State Representative for one term and Gloucester's Collector of Customs. His grandfather William Babson was lost at sea in 1777 aboard the Gloucester, a brig fitted for privateering during the American Revolution.  After capturing the British brig Two Friends off Newfoundland and unloading at home the ship's valuable cargo of wine and salt, the Gloucester returned to battle, if you will, but was never heard from again, along with its 130 man crew.

One might have thought that with this background Marian Babson might have devoted her crime writing career to quaint regional New England mysteries, like Phoebe Atwood Taylor; yet I don't believe she wrote a single such one, strangely.  Marian Babson quite clearly was, like a lot of mystery mavens, an ardent Anglophile; like John Dickson Carr before her; and at some point in her life she settled permanently in London, where she found much of the material for her stories.

I've seen claim made that Babson moved to England in 1961, but records indicate that throughout the Sixties she maintained a residence at 155 Bennett Street in the Brighton neighborhood of Boston, where she had lived since the early 1950s, when she worked as a librarian and stenographer.

On the other hand, records also indicate that from at least 1967 to 1982 Babson lived in a flat in King's Cross, an area that has been described as having been made notorious by the Eighties for its prostitution and drug abuse, though relatively cheap rents and its central London location made it appealing to artists and designers--and perhaps mystery writers!  Certainly the district offered good copy for a crime writer, of which Babson made considerable use in some of her novels.

I plan, events permitting, on writing in detail about some of Babson's books soon.  She was an interesting writer and I hope her work is reprinted and her memory made secure.  I'm sure a lot of the readers of this blog used to read her like I did.
Posted by The Passing Tramp at 3:28 AM