Empty Chairs: The Murders Near Mapleton (1929), by Brian Flynn--Merry Christmas from the Passing Tramp

"You devil!  If words could burn, I'd rack the dictionary of Hell for your cremation--your blasted cleverness is inhuman!"

Ever since back in 2011 I wrote about Golden Age crime writer Jefferson Farjeon's Christmas thriller Mystery in White--subsequently reissued, to great success, by the British Library--vintage Christmas mysteries have become quite the thing again with publishers. (Don't get me wrong, for this I credit not my blog but the popular success of the BL with their Farjeon edition, for nothing inspires imitation in the business world like the demonstrable prospect of not inconsiderable financial gain.)

This year both Cyril Hare's An English Murder (1951) and Gladys Mitchell's Groaning Spinney (1950) (reviewed here last Christmas season) have been reissued by Vintage, in editions designed to emphasize the cozy Christmas connection.  In the case of the Mitchell book, a title change was thought necessary.  (Purchasers of the new edition--entitled Murder in the Snow--may not realize the book was already available under the original title, like all of Mitchell's other mysteries.)

Similarly Dean Street Press this year has reissued Christoper Bush's Dancing Death (1931), which if not quite a Christmas mystery in the purist sense is certainly a winter seasonal one.  However, so far no one has snapped up Brian Flynn's The Murders Near Mapleton, a copy of which I have owned for a decade or more and now finally review here.  Flynn is a writer my fellow blogger The Puzzle Doctor, a fine advocate, has been writing about a good deal lately. 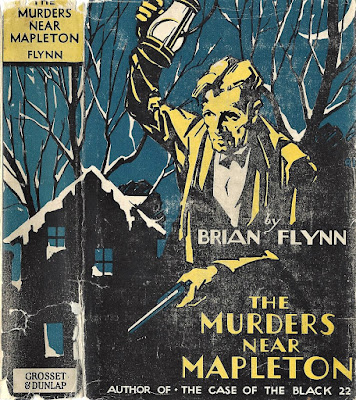 To be sure, the generic title of Flynn's The Murder Near Mapleton hardly gives the nature of the holiday show away, but the novel is indeed a Christmas mystery.  Perhaps it needed to be titled The Merry Christmas Murders, or something more apparent like that.

Mapleton has many of the classic elements that people never seem to tire of in a classic English mystery: Christmas, a country house, a party, snow, a brilliant amateur detective running circles around the obtuse professional investigator, and of course a jolly old spot or two of bloody murder.

The novel opens at wealthy Sir Eustace Vernon's country house Christmas party, where the host is offering a toast to the "empty chairs"--little does he know that his own chair soon will become permanently empty of him!

Before the night is over local police will find themselves tasked with investigating not only the murder of the popular Sir Eustace (shooting, made to look like suicide in front of a train, recalling a favored gambit of John Rhode), but also, in a pleasing twist, that of Sir Eustace's butler, Purvis (poisoning for this one).

Those present at Vernon Manor on this dark and doubly fatal night are, besides the servants (a few of whom, in addition to the bumped off butler, play fairish roles in the tale): 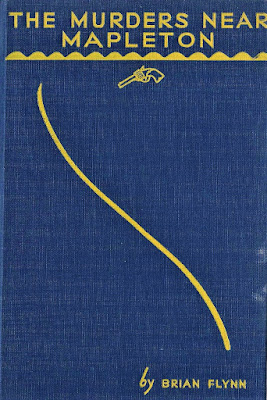 Sir Eustace's niece, Helen Ashley and Terence Desmond, an eligible young man (if you think these two will get together before too long, you may be on to something)

the mayor of Mapleton and his wife, Alfred and Emily Venables

This is a wide array indeed of potential culpritude, though, truth be told, they all are cardboard creations.

Brian Flynn tends to look down his nose at the novel's  financier and the politician, a common enough attitude in Golden Age English mystery, while he portrays the Catholic priest, Father Jewell, as something rather out of medieval times, as his eyes blaze with religious fervor. (Is GK Chesterton's Father Brown, created by a Catholic, the only mild Catholic priest in GA English mystery?)

Reading Mapleton I almost was expecting the good Father to start talking about what the Knights Templars are up to these days, what sort of armor Joan of Arc was wearing at her last battle, what the look in illuminated manuscripts is this year, how the current Crusade is going down in the Holy Land and the like.

But I'm of the school that we should not complain about stock characters in a classic-style puzzle mystery if the plotting is engaging; and I would say that in Mapleton Flynn has constructed a sufficiently interesting plot, with some nice twists, which can't be divulged here in detail of course.

One of them, however, oddly is the same as a singular twist that appeared in a much better known mystery novel published the same year--though the implications, interesting to modern students of gender studies, are not explored by Flynn, who as an author is interested, in my impression, not in psychology but plot.

The plot does have its last minute surprises (at least for me), though to my taste they depend overmuch on the capacity of villains to pull off certain improbable  actions.  I'm reminded of the mysteries of A. Fielding, though, goodness knows, Agatha Christie and John Dickson Carr pushed the boundaries of plausibility to the breaking point at times. Even stolid Freeman Wills Crofts was accused by that old and often pickled sourpuss Raymond Chandler of occasionally getting "too fancy."  (To be fair to RC, this is not necessarily an unfair criticism if one is harping on realism.)

Flynn's amateur sleuth, Anthony Bathurst, is a great pal of Sir Austin Kemble, Commissioner of Police; and the latter worthy pretty much allows his clever gentleman friend to stride over the field of investigation like a Greek god come down from Mount Olympus.  Of course Bathurst, once brought on the scene in a most unlikely way, does solve the case, based on deductions that are adequately demonstrated to the reader near the end of the novel.

Often the writing tends to be on the stodgy side (see the opening quotation to this piece), though occasionally there is a pleasingly bright patch of writing. Perky housemaid Palmer observes at one point, "some of these policemen can read crimes into anything you do--innocent though it may be.  And it's worse since good old Edgar Wallace showed 'em up so in The Ringer"--this a reference to thriller titan Edgar Wallace's crime play, a smash hit on the London stage in 1929.  Wallace, the wags said, kept more women up at night than any other man in England.

Late in the novel, Anthony Bathurst--who in this tale, at least, seems immune to feminine charms-- comments unromatically that a certain married woman in the novel "probably hates her husband even more than most wives."  Ouch!  More of these unexpected asides would have been welcome in the book, to my taste. (More on Brian Flynn himself soon.)

All in all, I would say The Murder Near Mapleton is a meritorious example of the pure puzzle type of detective novel that a certain type of mystery fan still clamors for today.  Let's help make next year's yuletide gay by gifting readers with a Brian Flynn.  I have a certain feeling he will be coming back in print.
Posted by The Passing Tramp at 2:33 AM