Mr. Livingston, I Presume? Armstrong Livingston (1885-1948) and the Murder Racket

Once in the middle twenties I was driving along the High Corniche Road through the twilight with the whole French Riviera twinkling on the sea below.   As far ahead as I could see was Monte Carlo and though it was out of season and there were no Grand Dukes left to gamble, and E. Phillips Oppenheim was a fat, industrious man in my hotel, who lived in a bathrobe--the very name was so incorrigibly enchanting that I could only stop the car and like the Chinese whisper "Ah me! Ah me!" 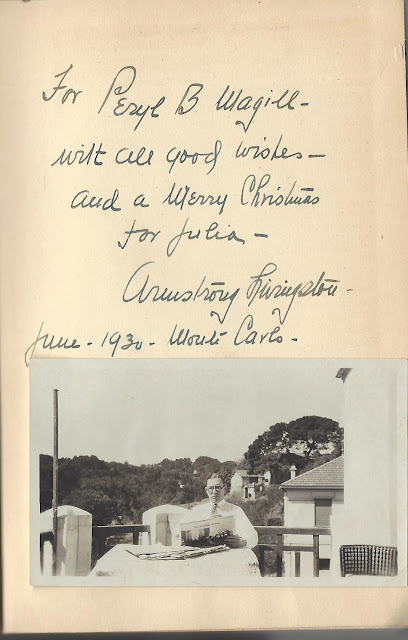 From Monte Carlo in 1930 crime writer Armstrong Livingston inscribed a copy of his 1929 mystery The Monster in the Pool to Peryl B. Magill (1889-1983), a southern California osteopathic physician and daughter of prominent Orange County rancher and Civil War veteran Cyrus Newton Magill. He bestowed "all good wishes" upon Dr. Magill and "a Merry Christmas" unto her younger sister, Julia.

Pasted into the book, presumably by the author himself, is a photo of Livingston at table, newspapers spread out before him.  The Paris Herald Tribune, mainstay of American expatriates in Continental Europe, is most prominently displayed.

Although an expat himself, Livingston set most of the mysteries with which I am familiar--most of which appeared at the height of the Jazz Age and are of the "Murder? What fun!" school associated with A. A. Milne's The Red House Mystery (1922) and Agatha Christie's fizzy Tommy and Tuppence thrillers--in the United States.

By the depressed 1930s, however, Livingston's writing career, like that of the admittedly more high-toned F. Scott Fitzgerald, had taken a downward turn, with only a few more novels by him ever appearing in print.  By the time of his death, on February 7, 1948, when he was only 62, his occupation was given as "retired author."

Like the great vintage crime writer Rufus King, much beloved and blogged about at The Passing Tramp (as longtime readers of this blog will know), vintage crime writer Robert Armstrong Livingston, or "Ray" as he was known to family and intimate friends (possibly for his initials RA), came out of the top drawer of New York society--though within Livingston's particular drawer were representatives of the most prominent of old New York families imaginable.

Ray was a gr-gr-gr-gr-gr-grandson of Robert Livingston the Younger, colonial merchant, mayor of Albany, New York and a nephew (in fact he was known as The Nephew) of Robert Livingston the Elder, owner of 160,000 acres of land along the Hudson River and the first "lord" of Livingston Manor. Through The Nephew Ray was related not only to Livingstons, of course, but additionally to such big-wigged families as the Roosevelts, Schuylers, Beekmans, Stuyvesants, Fishes, Van Rensselaers and Ten Broecks.

Ray's own father, the attorney Robert Armstrong Livingston, Sr., was praised in the snooty History of Putnam County, New York, in the sort of effusive terms one often sees in Golden Age detective fiction of the stodgier sort:

Though still a young man, his ample wealth, high social standing, and remarkable ability as a jurist have won for him a popularity and a position in the county, which are hardly equaled by any.

In these (putatively) democratic days, we at least like to appear less nakedky admiring in our praise of "ample wealth" and "high social standing" per se.  Yet it certainly appears that Robert A. Livingston was not only wealthy and socially prominent but exceedingly able in his chosen profession of the law.

Among the interesting criminal cases where Robert A. Livingston mounted successful defenses, securing acquittals for his clients, was that of Alexander Armstrong, a longtime African-American servant of Robert's prominent kinsman Cambridge Livingston.

Alexander Armstrong stood accused of arson in the first degree, its having been established that he had repeatedly threatened to burn down the tenement in which he lived. A visiting African-American minister and his wife had testified that during their visit Armstrong had thrown a lamp at the ceiling, starting a conflagration in his room.

Livingston was able to establish, however, that the clergyman had served time in Sing Sing Prison for assault and that on the night in question he and his wife had physically attacked the accused, during which scuffle the lamp had been upset, with a fiery result.

A considerably better-known case with which Livingston became involved was his defense of railway brakeman George Melius, who had been charged with manslaughter in the fourth degree over the January (Friday the 13th) 1882 Spuyten Duyvil train disaster, in which eight people lost their lives in a train collision and devouring fire that took place in the dead of winter near the aptly named Spuyten Devil (Spouting Devil) Creek in the Bronx.

These fatalities included newlyweds Mr. and Mrs. Park Valentine (the husband was the eldest son of Bennington, Vermont mill owner and Civil War hero Alonzo Valentine) and influential New York state assemblyman Webster Wagner.  (A number of the passengers on the train were legislators returning to New York City after the closing of the legislative term.)

This trial was a famous one in its day, in part on account of the social prominence (that term again!) of the victims and in part because of the horrific accounts regaled in the newspapers and newfangled picture magazines of the deaths of the victims, most of whom had been burnt alive.  Of Mr. and Mrs. Valentine, who were only 21 and 19 at the time of their tragic demise, one terrible account, published in the popular Illustrated American, noted that the

young wife was perfectly free when her charred remains were discovered, and could easily have escaped from the burning car.  But she would not leave her husband, who was caught by the debris, and, clinging to him, she died with him.  They were found clasped in each other's arms, those arms being burnt to a crisp.

horrible agonies he must have suffered before death released him--how fearfully he must have writhed with pain.  The body was like the trunk of  a charred tree; the arms were almost gone; the head was a calcined lump.

Senator Wagner was identified in part by his intact gold watch, which bore the initials "W. W."  Being a jaded mystery reader I'm reminded of all those Golden Age detective novels involving devious tricks performed with burnt bodies--see for example Freeman Wills Crofts's 1927 Inspector French and the Starvel Tragedy--but this was a real human tragedy, of course, not a fictional puzzle problem.


It was poignantly reported that onlookers had rushed to the scene of the burning cars on that dark wintry night rolling snowballs, in a desperate effort to put out the flames--no firefighters having yet arrived.  A frivolous children's playtime activity became a heroic act of rescue.  It seems fortunate under the circumstances that so few passengers actually perished.

Robert A. Livingston had been advised that the defense of the hapless brakeman George Melius was a hopeless one, yet in fact his arguments secured Melius' acquittal by the persuaded jury.  The implication in the decision was that the brakeman had been made a scapegoat for the railway company.  As the account in The Illustrated American explains

[a]lthough everyone felt that, but for the wretched parsimony of the company in heating the car with stoves, the train would not have caught fire and the majority of the lives saved, the company escaped scot-free.

It was the Gilded Age, after all!

Reflecting his social standing, Robert A. Livingston was a Republican and Episcopalian.  He twice served in the State Assembly and was a serious contender for the Speakership.  His death in 1913 before he had completed six decades of life no doubt foreshortened a most accomplished legal and political career.

His son, Robert A. Livingston, Jr., or Ray, the future crime writer, was but 27 when his father expired, having been born to Livingston pere and his wife, Florence Olivia Scott of Ravenswood, Queens, on August 16, 1885.

Anastasia's daughter Augusta's 1887 marriage to John Milton Glover, though disapproved of by her sisters, who considered Glover an unsuitable match, was breathlessly heralded as the "most brilliant private social event of the season in this city, when the wealth, social position and surroundings of the parties are considered...."  The bride's doting mother was said to have presented the newlyweds with $100,000 as a wedding gift.


A Republican and Episcopalian like his father, Ray Livingston had been educated at St. George's School in Newport, Rhode Island, where his parents had another home (it seems that while Gladys enjoyed summering in Newport, Robert liked fishing in Maine), after which he entered the insurance, and later the brokerage, business.

Four years after his marriage to Gladys, however, the couple departed to the Atlantic island of Bermuda (previous to this time they lived in Woodmere, Long Island), where during the war years they resided at a house called "The Moorings" and Ray began writing pulp crime fiction.


For the first half of the 1920s the couple lived in Algiers, but by 1926 Ray and Gladys presumably had divorced, for that year in Manhattan Ray wed Ruth Stevens Dorr.  In 1930 he was living in Monaco, but by 1942 he was back in Manhattan, seemingly single and retired.  He died six years later and was buried in the historic Greenwood cemetery in Brooklyn, the final resting place of many of his ancestors and more distant relations.

I plan to say more about Livingston's crime fiction in a future post, but for now I will simply list his known crime novels. 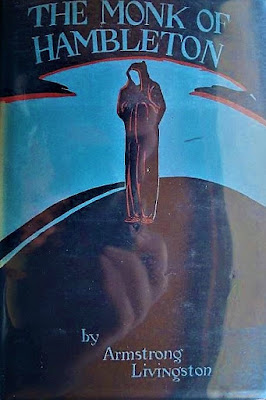