[Is he] [g]enerous?  Or just another millionaire?"

"Very generous.  He's paying all expenses, and even that didn't stop him from recommending [we stay in] the [swanky] Century Hotel in Prescott."

"Thank goodness!  This firm has needed a customer like that for some months/"  Mr. Hibbert's eyes took on a dreamy expression. "Only the other day I saw the most exquisite chinchilla wrap in a Fifth Avenue window, but I knew I had no more chance of getting it than if I'd been your wife."

"Tommy!" expostulated Denise in her soft warm voice.  She was properly scandalized.  "If somebody should hear you!"

"It's a queer place and it takes a queer person to like it."

The detective [Jimmy] glanced across the table almost fondly.

"You're the greatest little vamp that ever dug for gold!  I'm sure I don't know why Matilda objects to kissing you, Tommy--there are moments when I feel like doing it myself!"

"What can I do for you?" he asked dulcetly.

"Yes.  Any form of depravity you may have on hand."

Brutal murder in the American Midwest, in a tome entitled In Cold Blood?  I know what you're thinking, but before there was that scion of the Deep South, that marvel of Monroeville, Truman Capote, there was crime novelist Robert Armstrong Livingston, of the New York Livingstons, don't you know.

Among many other things, both good and bad, a member of the Livingston clan built Edgewater, a Greek Revival mansion overlooking the Hudson River that later became the abode for a time of Gore Vidal, who, as discussed previously on this blog and in an essay I wrote for Murder in the Closet (2017), briefly moonlighted in mystery fiction, under the pen name Egdar Box.

Oddly enough, the famous book that Armstrong Livingston's In Cold Blood really bears some resemblance to is Dashiell Hammett's bloody landmark mystery Red Harvest (1929), wherein a tough town is cleaned up (or perhaps more accurately wiped out) by an even tougher detective, the memorable Continental Op.

To be sure, both Hammett and Livingston wrote for the American mystery pulps before turning to novels, but such different approaches the two men took to crime!  Nevertheless, while Hammett is hard-boiled and Livingston is light-hearted, their two novels, separated by just two years, seethe with civic corruption and bloody murder.

Livingston's favored series sleuth, private inquiry agent Jimmy Traynor, debuted in 1922 in The Mystery of the Twin Rubies, a highly classic tale that comes complete with country house and butler.  By 1931, when he solved the series of murders in violence-riddled Prescott, "that thriving but ever sinful city of mid-western America," in the novel In Cold Blood, Jimmy had acquired an entourage composed of a vivacious flapper-ish wife, Denise; an always game spinster aunt, Matilda Landry; and, last but most definitely not least in my view, Jimmy's remarkable transvestite assistant, Tommy Hibbert. 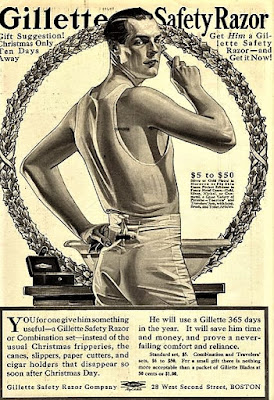 While in the novel Denise is first described as a "very pretty, dark-haired young woman" reading a book and Aunt Matilda as a "much older woman" doing her knitting, Tommy is detailed at greater length:

He was short and slender, very good-looking in a pink-and-white way, and although he was now in his twenty-fifth year no trace of down, much less anything so coarse as a hair, had come to mar the smoothness of his dimpled cheeks.  If in need of money--which he never was--he could readily have sold his likeness to one of those "a skin no razor should touch" advertisements.  His was not only the famous schoolgirl complexion, but a complexion such as lamentably few schoolgirls have.

Tommy's greatest passion is buying beautiful frocks and ravishing furs to gad about in (see the opening quotations to this piece).  In this passion he is indulged by his boss Jimmy, who seems to employ Tommy mainly to "vamp" male suspects.  And vamp Tommy does!  Verily, Tommy is the Queen of the Vamps, a true Duchess of Drag.

Camp sensibility is pronounced in the novel (again, see the opening quotations), and it is congruent with the so-called "pansy craze" that at the time of the novel's publication was still camping it up in sophisticated metropolitan centers in the United States and other countries at this time.  Explains Darryl W. Bullock in a 2017 Guardian article (linked above):

The 1920s saw an increase in the number of bohemian enclaves in rundown areas, such as New York's Greenwich Village.  Painters, poets and performers were lured by the cheap rents and by an increasingly wild and lawless lifestyle.  Prohibition had given birth to a black market for booze and a bustling underground scene, where bright young things slumming it in mob-run nightspots developed a taste for camp, cutting repartee.

LGBT people were flocking to cities as much for the nightlife as for the ability to connect with others.  Soon, Variety was reporting that Broadway "will have night places with 'pansies' as the main draw.  Paris and Berlin have similar resorts, with the queers attracting the lays."  In Berlin, you could hear singers performing Das Lila Lied (The Lavender Song), one of the earliest songs to celebrate homosexuality.

During these years pansies and other queer characters also popped up in the pages of mainstream fiction, but Armstrong Livingston's Tommy Hibbert is the only drag detective from the Golden Age of mystery writing that of which I am aware. (Please chime in if you know otherwise.)


To Tommy's vamping activity Livingston devotes a chapter, appropriately titled "Tommy the Vamp." Interestingly, when Tommy is decked out in his drag alter ego of Mrs. Clare Fontenoy, the author describes the exquisite creature as "she," even though we, the readers, know that deception is afoot:

As she stood back from the tall glass to survey every detail from the Nile-green slippers to the diamond ornament in her hair--bad taste, that, but she guessed Julian would admire it--she felt an artist's pride in the result.  She would have given anything if Jimmy had been there to gasp his amazement.

Was Armstrong Livingston ahead of his time, embracing the concept of "gender identity"?  Perhaps he was ahead of this time, even.

If these speculations strike some readers as too high-falutin', we can always scrutinize In Cold Blood as a mystery story, of course!  While the novel is most distinguished by its naughty good humor amid mayhem and murder, there is genuine detection--along with an intuitive leap on the part of Jimmy that goes a bit too far, for my taste!

In New York Jimmy is hired by the visiting Hannibal Partridge, the Prescott multimillionaire, to get his "youngest and only living child," Jessica Partridge (I enjoyed this euphonious mashup of icons Jessica Fletcher and Shirley Partridge), out of a jam.  Although she has not been arrested, Miss Partridge is suspected by Prescott authorities and citizens alike (including even her boyfriend, it seems) of having committed double murders in their fair burg: firstly, that of thirtyish man-about-town and thorough "bad egg" Meredith Chambers (skull bashed with poker) and secondly, duplicitous French lady's maid (is there another kind in American and British crime fiction?) Marie Durant (stabbed between ribs).

Partridge wants to get the stain of suspicion removed from his impulsive daughter once and for all. Factors complicating Jimmy's investigation are a packet of incriminating love letters, turned into instruments of blackmail; a dropped hairpin (what mystery maven Carolyn Wells called a "gravity clue"); and, of course, corruption at the highest levels of local and state government.  Prescott is a real Sin City, as Jimmy points out when he gives his Denise and Aunt Matilda a driving tour of its criminal districts, which apparently encompass the entire metropolis:

Squalid area this, by the station.  Now we're running up Fenimore Street--remember the Fenimore Arms murder, Aunty?  Here's Jalep Avenue, where Squint-Eye Solomon got his throat cut.  Here's Jereboam Street--I forget just what happened there, but it was quite unpleasant....Bay Street--you recall the Bay Street Siege, Denise, when they had to turn out the militia and dynamite the house in which six gangsters with a machine-gun had taken refuge?  Cooper Avenue, where they had that pitched battle between two rival gangs a month ago.  Ah--now we're coming to the better districts!  On your left is Canterbury Street, where that society debutante lived who garroted her mother because the old lady had alienated the affections of the daughter's boy-friend.

Jimmy's comparison between Prescott's squalid and better districts is rather amusing, I think.  You would almost get the impression that the good old U. S. of A. has had something of a history of violence.

Posted by The Passing Tramp at 3:48 AM