Guess Who's Coming to Murder? Death Shall Overcome (1966), by Emma Lathen

"Ran into Glover this morning.  He tells me that Owen Abercrombie has gone crazy."
"How could he tell?" asked Thatcher with genuine interest.
"Says he's talking about a Wall Street Defense Council," said Robichaux.  "With rifles.  You remember they had to take his uncle Basil off the floor in a straitjacket in '29."
"I didn't," said Thatcher, considerably entertained.
"Bad blood," Robichaux said.

"Well I ask you," Robichaux replied reasonably.  "Would you want the Sloan mixed up with someone who wants to send Negroes back to Africa, abolish social security and drop the hydrogen bomb on Cuba?"

.... as he looked at Owen Abercrombie's ponderous, underslung jaw and glittering feral eyes, he was tempted  to think that he had receded though several major geological eras and was surrounded by Neanderthals.

"They're all against us.  They'll try to muzzle us, try to smear us.  Are we going to let them get away with it?
"NO!"
"You're the only ones left to defend America.  Are you going to let the pinkos take over?"
"NO!"


I'm always struck when I see people declare that a given eighty or fifty or even thirty year old detective novel is "dated," because it seems to me that the old adage, "the more things change, the more they stay the same," has something of the ring of truth to it--as does another, "those who forget history are condemned to repeat it."

Looking around today, I don't feel that Emma Lathen's fifth detective novel, Death Shall Overcome, is so all-round dated, despite the old-fashioned terminology ("negro" for black) and the fact that women play no role in the business world except as wives and secretaries. Where race is concerned, we still seem to be grappling with a lot of similar issues today.  A novel wherein one of the main characters is an old racist New York businessman of questionable mental stability who gives encouraging winks and nods to racial hate groups?  Not so dated, I think!

1966 was another troubled year for the United States and much of the rest of the world but an undeniably great year for crime writer Emma Lathen (the economist Mary Jane Latsis and attorney Martha Henissart).  With a fecundity which we associate with great Golden Age mystery producers like Agatha Christie and John Dickson Carr, Lathen that year published two detective novels about her appealing amateur sleuth, banker John Putnam Thatcher (Senior Vice President of the Sloan Guaranty Trust): Murder Makes the Wheels Go Round and Death Shall Overcome.  The pair of detective novels received boffo reviews at the time in both the United States and United Kingdom, sold like hotcakes over the years in paperback and today remain highly regarded by fans of classic crime fiction (even if the recent Thatcher eBook editions are disappointingly shoddy).

Emma Lathen, who published her first Thatcher detective novel in 1961, would go on to produce pairs of Thatcher mysteries in additional years--1968, 1969 and 1971--as well as Thatcher singletons every other year between 1967 and 1972, for  a total of 14 Thatcher novels in the dozen years that spanned 1961 and 1972--one of the most remarkable achievements by any mystery writer, I believe, in the Silver Age of detective fiction.

Lathen later managed two more sequences of Thatcher novels, five between 1974 and 1982 (including Double, Double, Oil and Trouble, reviewed here) and a final five between 1988 and 1997, the year of Mary Jane Latsis's death.  Then there were seven mysteries the pair wrote as RB Dominic, one pseudonym--as in the case of Carr and his incredibly prolific detective novelist friend John Street--not being enough to contain the pair's creative energies; these appeared in two spurts, 3 from 1968 to 1971 and 4 from 1978 to 1983.

Going back 52 years to 1966, when the Passing Tramp was but a Pramming Toddler and a mystery reader yet to be, Lathen's two detective novels from that year illustrate her three great strengths: puzzle plotting, business detail and social satire.

Murder Makes the Wheels Go Round is stronger on the puzzle side of the ledger, but Death Shall Overcome should be of great interest to readers today for its wry social detail.  Moreover, the puzzle is no slouch, though, like Dorothy L. Sayers's Gaudy Night, it tends to get overshadowed by the author's social interest.

As suggested by the title of Death Shall Overcome, which alludes to the social activist anthem "We Shall Overcome", in this novel Emma Lathen drew inspiration from the long struggle of black Americans for civil rights, which reached a climax, of sorts, in the Sixties.  On August 6, 1965, American president Lyndon Johnson signed into law the Voting Rights Act; a week later the Watts riots erupted in a section of Los Angeles over allegations of police brutality.   In January of the next year local NAACP chapter president Vernon Dahmer was killed by a bomb in Hattiesburg, Mississippi, and the Black Panther Party was founded in October, the same month Death Shall Overcome was published.  Martin Luther King, Jr. himself had only about a year-and-a-half left to live, before he was cut down by a white assassin at a hotel in Memphis, Tennessee.

A lot of writers, especially those of the more traditional sort of crime fiction, might well have left this touchy topic untouched, given all the controversy and all too real trauma and pain surrounding it, yet during her career Emma Lathen never shied from taking on topical events, right up to her last novel, published in 1997, which dealt with collapse of Communism in the former states of the Eastern Bloc.

In Death Shall Overcome, Wall Street has ructions aplenty when the octogenarian Nat Schuyler, the puckishly subversive eminence of ultra-prestigious brokerage firm Schuyler & Schuyler, announces that the firm plans to take  on as a new partner (fatefully with a seat on the New York Stock Exchange) distinguished multi-millionaire banker Edward Parry, who just happens to be a "negro," to use the terminology of the novel.

Utterly appalled by this development are hidebound white racists Owen Abercrombie ("Wall Street's most vocal ultraconservative") and Dean Caldwell, young senior analyst of Schuyler & Schuyler ("He's from Alabama"), despite the fact that Edward Parry is "a replica of a Wall Street financier with a dark skin" who "in a happier era," Lathen drolly observes, "might have been a Republican."  Parry seems a true paragon of virtue, something like Sidney Poitier in the 1967 Katharine Hepburn-Spencer Tracy film Guess Who's Coming to Dinner?--though refreshingly to my taste the Lathen novel is vastly more acerbic than that well-meant but rather saccharine and didactic star-turning film. 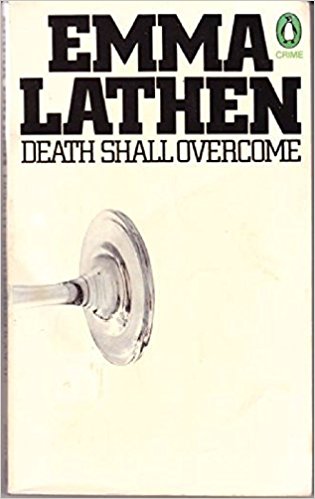 At an elite social get-together, however, it is not Edward Parry who drops dead but rather another partner in S&S, Arthur Foote, who is shockingly done in by means of nicotine dropped into his Bloody Mary highball glass.  But was the true target actually Edward Parry?  This theory seems to get confirmation when someone takes an errant rifle shot at Parry, outside his home in a wealthy--and lily white--suburban neighborhood.  Of Parry's admittance into this august community comments Lathen sardonically, "they were perfectly prepared to embrace any one-home builder, provided only that he was a multimillionaire."

Actual detection gets sidelined for a long time as Lathen amusingly deals with the consequences of wealthy white resistance to Parry's elevation to the Stock Exchange.

Black novelist Richard Simpson, who opportunistically  has formed the group CASH (Colored Association of Share Holders) indiscriminately threatens the elite of New York with a "March on Wall Street"--this an allusion to the 1965 Selma to Montgomery Marches, which had helped secure passage of the Voting Rights Act. (I was also reminded of, from more recent years, Occupy Wall Street.)

I think there's no doubt the women who wrote as Emma Lathen were fairly liberal on many issues and in Death Shall Overcome they rebuke white racists roundly; yet it seems to me that they also treat Richard Simpson as something of a posturing phony, more concerned with gratifying his own ego than meaningfully expanding civil liberty.  Is he based on the distinguished black author James Baldwin?  Here's the character's introduction to the reader:

Mr. Simpson, noted for his simpleminded and successful novels about an expatriate in Paris and his beautiful relationship with a sylphlike busboy, had the resonant voice of an actor, and a firm grasp on the microphone thrust before him.

Be that as it may, this novel managed to unite in a chorus of praise both the conservative critic Jacques Barzun and the liberal critic Anthony Boucher, both of whom were lovers of mystery fiction, though they frequently were at odds not only politically but aesthetically.  Barzun, a putative puzzle purist, was so impressed with Lathen's treatment of "the civil rights movement, with its attendant sing-ins and sit-ins," that he forgave her "playing down of mystery and detection in favor of social comment and superb characterization"; while in a contemporary notice Boucher proclaimed Lathen's latest her best work yet and a "wonderfully rational and pointed novel."

Traditionalists never fear, though: there is a good puzzle here, with impeccable clueing, if only sporadic investigation.  If you're a fan of classic crime fiction, Emma Lathen should overcome your entertainment doldrums.
Posted by The Passing Tramp at 9:09 PM