It's a Ruthless World: Cut Throat (1932), by Christopher Bush

Christopher Bush detective novels 21-30 are being reissued by Dean Street Press next month.  In the meantime, I thought I would post here my own take on Bush mystery #7, Cut Throat, as it is found in the introduction to the DSP volume.  It provides some background to the novel.--TPT 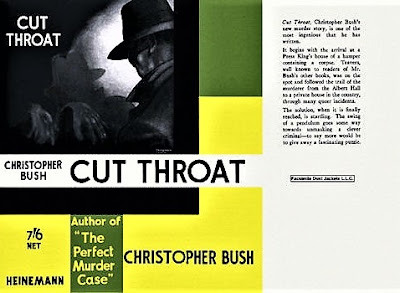 During the fall and spring of 1930-31--when ideas likely were germinating in Christopher Bush’s crafty and fertile mind about Cut-Throat (1932), the seventh Ludovic Travers’ detective novel--the devastating impact in Great Britain of the global Great Depression was casting British politics ever further into disarray.

Beset by crisis upon crisis, the weak and unpopular Labour government of Prime Minister Ramsay MacDonald continued to flag, propped up only with Liberal and Conservative acquiescence.  Yet Stanley Baldwin, leader of the Tories since 1923, himself was under immense pressure, with powerful right-wing press lords--Max Aitken, 1st Baron Beaverbrook, owner of the Daily Express and Evening Standard, and Harold Harmsworth, 1st Viscount Rothermere, owner of the Daily Mail and Daily Mirror and younger brother of the late press titan Alfred Harmsworth, 1st Viscount Northcliffe-- having united in an effort to oust him as party leader over the issue of free trade.

In the 1929 general election, Lord Beaverbrook had launched the Empire Free Trade Crusade, a political movement designed to promote free trade among member states in the British Commonwealth while erecting tariff walls, including a so-called “tax on food,” against the rest of the world; and in 1930 he joined Lord Rothermere in forming the United Empire Party, a dagger aimed at Baldwin’s political heart.  The shadow conflict between Baldwin and the press lords came to a head in a hotly-contested and much-publicized March 1931 by-election contest in an affluent constituency in London’s West End.  There Beaverbrook and Rothermere’s man, Sir Ernest Petter, ran an Independent Conservative campaign on behalf of “Empire Free Trade” against rising Tory star Alfred Duff Cooper, a Baldwin supporter.

Just two days before the by-election, in what historian William D. Rubinstein calls “one of the most famous political speeches of the twentieth century” (see Rubinstein’s Twentieth-Century Britain: A Political History), Baldwin dramatically denounced the newspapers of the press lords as “engines of propaganda for the constantly changing policies, desires, personal wishes…of two men” and the two men themselves as power-hungry prostitutes: “What the proprietorship of these papers is aiming at is power, but power without responsibility—the prerogative of the harlot throughout the ages.”  After Baldwin’s so-called “harlot speech,” Duff Cooper won the election handily, effectively saving the career of the opposition leader, who went on with Ramsay MacDonald in August to form a National Government, which won a remarkable landslide victory in the October 1931 general election.

In addition to being a corker of a detective novel, Christopher Bush’s Cut-Throat, which saw publication in the spring immediately following the 1931 general election, is reflective of early Depression-era domestic politics in the United Kingdom, particularly in its highlighting of the political ascendance in between-the-wars Britain of the press lords.  Much of Cut-Throat concerns two fictional newspaper tycoons, elderly Sir William Griffiths, who recently divested himself of the Mercury (“so Cobdenian that it creaked,” fatalistically comments Ludovic Travers of the newspaper, referencing Richard Cobden, the mid-Victorian Liberal thinker and free trade ideologist), and punningly-named Lord Zyon, owner of the Evening Record, with which the now defunct Mercury has been amalgamated.

Drawing on the Record’s slogan, “Free Trade with a Difference,” the enterprising Lord Zyon has created the protectionist “Work-for-All Crusade,” which he plans to formally launch, against an “enormous background of Union Jacks,” at a grand rally at the Albert Hall.  On account of his extensive economic expertise, Ludovic Travers—author, as any Bush mystery fan by this time surely knew, of The Economics of a Spendthrift and other highly brainy yet charmingly written treatises--has been personally invited by Lord Zyon to attend the rally, though he believes that “in the panacea which his lordship was prescribing for the nation’s ills there should be far less syrup and more Epsom salts.”


Travers arrives at the Albert Hall, where he learns from Lord Zyon that Sir William Griffiths has sent him a note informing his lordship of his unexpected conversion to the “Work-for-All” cause.  In the note Sir William has promised Lord Zyon not only that he “will most certainly be on the platform to-night,” but that he has sent to the Hall a hamper filled with evidence of illicit dumping, personally secured by himself.  (The economic term “dumping” refers to predatory pricing of exports in international trade.)  Sir William’s hamper duly arrives at the Hall and inside it there indeed is evidence of dumping--but not quite the sort of evidence that people were expecting.  Upon opening the hamper Lord Zyon discovers, amid a scattering of cabbage leaves, Sir Williams’s corpse, his throat cut from ear to ear.

Could the murder of Sir William Griffiths in such a brutal and demonstrative fashion have been some form of domestic terrorism?  “A burnt offering!  Mightn’t there have been a fanatic so frantic in his devotion as to have presented that sacrifice?” asks Travers in a flight of fancy.  “The slain body of a man who more than any other stood for reaction: the old, obstinate creeds of Free Trade and the weary shibboleths of a dead political age?”

To this theory Superintendent George Wharton of the Yard, who has been called into the case, scoffs.  However, he allows Travers--or more accurately Travers’s man, Palmer--to drive him down to Sir William’s Devonshire country house for further investigation.  There the pair interviews Sir William’s nephew and heir, the intrepid—or so publicity has it--world explorer Tim Griffiths, only recently returned from outer Mongolia; Sir William’s uxorious financial secretary, Bland; Bland’s distressingly vulgar wife (“What on earth had she been before Bland married her,” a bemused Travers wonders. “Barmaid?  Chorus girl?  Third-rate schoolmarm?”); Bland’s chess-playing pal, local vicar Reverend Cross; Sir Williams’s housekeeper, Mrs. Rigg; and Sir William’s “soft-footed” and “slimy” (Travers’s words again) butler, Daniels.  Also participating in the investigation is Chief-Inspector Norris, Wharton’s right-hand man, of whom we shall more in future novels, and an intrusive crime reporter named Sanders, who always seems somehow to wheedle his way into a crime scene.

When required at one point in the novel to dally with Mrs. Bland (for the good of the investigation, of course), Travers may come off to readers as a tad priggish, though he gives lovers of manners mystery glimmers of hope that there might be some form of a romantic fling in his future.  (“Given the right woman—and every other propitious circumstance—all sorts of things might happen,” reflects Travers after his ordeal by flirtation with Mrs. Bland.  “But this was appalling!”)

Additionally, in Cut-Throat Bush again gives scope to his extensive familiarity with classical music, as he had in his previous detective novel, Dead Man’s Music (1931), with mention being made of Mendelssohn’s overture to A Midsummer Night’s Dream (“Wonderful!  So utterly expressive of the play!”) and Ravel’s then cutting edge composition Bolero, first performed only four years prior to the publication of the novel (“All drum taps and things,” remarks Travers.  “Works up to a tremendous climax.”; “Gets on your nerves a bit,” responds Wharton.)

Overall Cut-Throat is a beautifully-constructed and hugely-entertaining detective novel, with some unexpected moments of melancholy concerning the troubled social condition of Great Britain in the early Thirties.  “All this case seems nothing but times!” wails one fretted investigator late in the novel, but the alibi problem Bush presents his readers is one of the finest such from the Golden Age, which is saying something, given the high standards of detection in those years.  As the crime fiction blogger Nick Fuller once aptly observed, Christopher Bush “was to the unbreakable alibi what [John Dickson] Carr was to the impossible crime.”
Posted by The Passing Tramp at 7:06 AM