Shall We Join the Ladies? Death in Lord Byron's Room (1948), by Sally Wood

...Ann unlocked her dressing case and drew out the pearl-handled revolver.
"You might slip this in."
Diana's eyes were like saucers.
"Oh, I say!"
"It's only a toy," said Nancy, putting it in her purse.  "I hope it doesn't drop out when I buy my ticket."
But she applied her lipstick with a new interest, wiping it all off twice.
Miss Ann was watching from the window.  The stout craft, with paddle wheels at the side like Mississippi steamboats, was warping into the dock.
"Ready, girls," she said.

Damn all female Americans!  Not women really at all, that one could mold, could teach, but wayward tomboys, not properly conscious of their sex, yes, even at fifty still eluding one, playing with danger, running headlong....

"If you were the kind of girl who screamed," her aunt said, "you wouldn't be in Switzerland."

"These fascist parties that spring up in France, they have caches of the latest weapons, handsome uniforms, their own newspapers.  They are waiting till the Communist threat gets very bad....Then they will say democracy doesn't work.  They will seize control, join with the Nazis who are still strong in Germany and," he spread out his hands, "we will have a fascist Europe."

Well, this prophecy did not prove correct in 1948, when Sally Wood published Death in Lord Byron's Room, but perhaps, after all, we just needed to give it 70 years or so.  In Europe and the United States.  It can't happen here?  Let's see about that!  Give the march of folly some time....

Like the fear of resurgent fascism, the theme of femme force, or less alliteratively female empowerment, in Sally Wood's novel also has resonance today.  In the novel it is around 1947 and Ann Thorne--socially-connected former ambassador's daughter and Connecticut "spinster" and clever amateur sleuth in Wood's prior mystery, Murder of a Novelist (1941)--and her sort of surrogate daughter/niece, beautiful and recently bereaved Nancy Thorne (she appeared in the prior novel too, at the age of 17), are sent to Switzerland on a secret mission to help ferret out a deadly fascist cabal that threatens the postwar security of Europe--and the world!

Okay, this seems more believable when you read it in the book, I promise.

Once in delightfully scenic but surprisingly deadly Switzerland, Ann and Nancy encounter many mysterious and often handsome men--Swiss, American, English, French and German--and a gangling young Englishwoman named Diana who becomes a sort of satellite of Ann and Nancy.  But in this land of double identities and double crosses, where hearts have as many holes in them as, well, the cheese, which men can the women trust?


I enjoyed this little novel quite a lot--in large measure, I think, because the lead characters are women, not professional spies but amateur ones.  Ann and Nancy are rather like Tuppence, doubled, of Tommy and Tuppence fame, yet they are more believable than that larking she-adventurer because they aren't relentlessly jolly and gung-ho.  Yet at the same time the book offers a charming break from the dour professional spy novels from the era.  (A more apt comparison might be with the work of Manning Coles.) 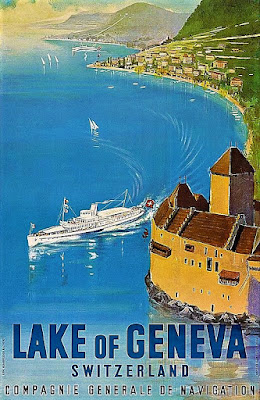 I thought the pairing of the sophisticated middle-aged Ann with the young, supposed ingenue Nancy works splendidly.  How nice it is to see a middle-aged women fully share the spotlight with the pretty young thing in a mystery novel!  Nor is the middle-aged "spinster" made into some matronly old maid figure of fun, as is so often the case in HIBK (Had I But Known) mystery.

Here the middle-aged woman is not only tough but alluring in her own, more mature and seasoned way--and she most definitely attracts men of a certain age. (Her own!).  I just wish the stunning dust jacket brought out Ann's alluring aspect more--though it certainly catches her toughness and no-nonsense personality.  And Nancy--va-va-voom!  She is beautiful.  And pretty tough herself.

The setting in Switzerland, in the towns and cities along the shore of Lake Geneva that the doomed English poet Lord Byron once haunted, is very well done, with a dangerous ride by paddleboat making a particularly fascinating tableau.  (There's also a deadly Wagner recital: Tristan und Isolde, beware!)

The fear of a Nazi revival so soon after the war might seem overwrought today (or not), but interestingly the novel mentions as a possible ringleader Martin Bormann, Secretary to the Fuehrer (and a staunch advocate during his infamous tenure of mass deportations, murders of Jews, thefts of art treasures and implementation of forced labor programs).  Until 1973, when his remains were discovered in Berlin and he was officially declared dead, Bormann was thought to have left Hitler's Bunker and escaped somewhere abroad. (In fact he had been killed the very day of his bunker breakout.)

This monster in human form was sentenced to death in absentia at the Nuremberg Trials.  Britain's MI5 was particularly obsessed with tracking down the supposedly absconded Bormann and seeing that the Nuremberg sentence was carried out, prompting one skeptical and snarkish British official, when told in May 1947 that Bormann might be coming through Ceylon:

I think Perera might be commended for his enthusiasm, but it might also be broken to him gently that the late but peripatetic Herr Bormann is currently being seen in Switzerland (the most persistent locale), Bolivia, Italy, Norway and Brazil--in the last country sitting in state on a high mountain beside his pallid Fuehrer....The press is doubtless waiting to break the silly season scoop: that he has been been seen riding the Loch Ness monster.


The John Dickson Carr locked room crowd may be disappointed with Sally Wood's mystery, because with a title like this one people might be expecting a locked room detective novel.  Nothing of the sort!  There is much mystery and a Christie-like plot (not to mention three deaths in the novel and several attempted murders), but no locked rooms.  Yes, Lord Byron once stayed in the murder room, but his presence hovers but lightly over the novel, despite the novel's title.


That point aside, it's a very good book, I think, and one I'm pleased to say is being reprinted this year. (Along, I think, with Murder of a Novelist, coming soon here in review).

The author Sally Calvin Wood (1897-1985) lived a life something like her charming and spirited creations Ann and Nancy Thorne.

From a socially prominent family in Rochester, New York (her father was a noted attorney and her grandfather, Horace McGuire, Deputy Attorney General of New York, once had been a typesetter on abolitionist Frederick Douglass's newspaper, where he witnessed a meeting between Douglass and antislavery militant John Brown), Sally graduated from Wellesley College in 1918 and patriotically enlisted upon graduation in the Army Nursing Corps.

Back at Rochester after the Armstice Sally completed her training and worked among the impoverished as a Public Health nurse.

Sally's first husband was Stephen Raushenbush, a government investigator of labor conditions in coal mines.  After their marriage the couple settled in Greenwich Village in 1924, where Sally became close friends of Caroline Gordon, future novelist and then wife of noted Southern Agrarian poet and essayist Allen Tate. Sally's second husband was Lawrence Albert Kohn (1894-1977), a professor at the University of Rochester School of Medicine.  The childless couple adopted the orphaned son of some colleagues who as Ted Kohn became a Rochester sculptor.

As this short biography indicates, Sally Wood was a woman of progressive ideals who fervently believed in the credo "Never again."  Hers was a life well-lived, most-assuredly; but better yet, from the mystery fan's perspective, hers was a life which included the publication of some entertaining mystery novels!

BONUS: should Ann and Nancy worry about you, dear reader?  Take the F Scale and find out!
Posted by The Passing Tramp at 8:44 PM