Up the River: Swing, Swing Together (1976), by Peter Lovesey 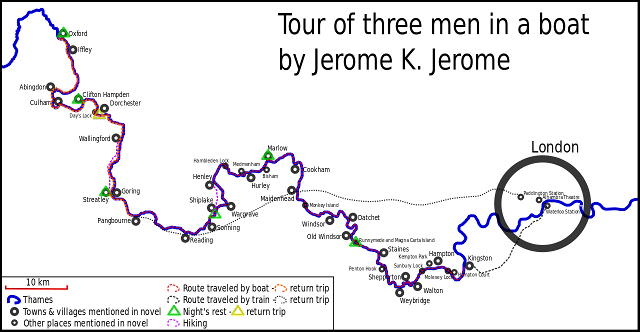 In 1889 English author Jerome K. Jerome published Three Men in a Boat (To Say Nothing of the Dog), a frequently comical semi-fictionalized account of a two week boating holiday on the Thames taken by JKJ himself and two friends.  (The dog Montmorency, regrettably, is entirely fictional.)  Despite print criticism of the book's use of "vulgar" slang (or perhaps in part because of it), the book was a huge commercial success (it has never gone out of print) and it inspired jolly trios to get themselves into boats and follow the route laid out in JKL's book in their own river excursions.  In 2014 Robert McCrum in the Guardian ranked TMIAB #25 on his list of the 100 best novels.

The book was four times filmed in England, in 1920, 1933, 1956 (with Laurence Harvey) and for television in 1975, with Michael Palin and Tim Curry, two chaps who were having a great year in 1975, what with the release, additionally, of, respectively, Monty Python and the Holy Grail and The Rocky Horror Picture Show.

Enter mystery master Peter Lovesey.  I didn't ask him about the timing when I got to talk to him at the Edgar Awards a few weeks ago, but as he was looking for background for his seventh Sergeant Cribb Victorian mystery--he had already done the athletic endurance competition known as a "wobble," bare knuckle boxing, the Fenian movement, spiritualism, bathing resorts and music halls--did Lovesey find the 1975 film a source of inspiration?

In any event, he produced one of the best mysteries in the Cribb series in 1976, with Swing, Swing Together, a murderous fantasia on Three Men in a Boat with, like its predecessor, great dollops of good humor amid the bloodletting.

The novel opens, unexpectedly, at Elfrida College for the Training of Female Elementary Teachers, where student Harriet Shaw, at the urging of two classmates (the kind you avoid in college if you are wise), is taking a moonlight dip in the Thames.  Yet more unexpectedly, the young women are overtaken by, yes, three men in a boat (to say nothing of a dog), resulting in in a flurried panic that leads to Harriet being carried rapidly downstream, where she is rescued, rather embarrassingly in the altogether, by a fortunately polite and quite personable young policeman by the name of Hardy.

Awkward as all this has been for Harriet (and she's naturally in rather a spot of trouble with the starched Head of the College, Miss Plummer), Constable Hardy is very personable indeed....Yet any thought of romance is set aside when Harriet finds she is now the leading witness in a murder investigation, the three men in the boat being the main suspects in the slaying of--oh my goodness dare I say it--a passing tramp.

So many times is a passing tramp suspected of murder in classic British mystery (however unjustly); very few times indeed is the passing tramp the murder victim!  Why shoot a butler, Georgette Heyer once queried (you should have seen the sneer of the bookstore clerk who sold me a copy of that title)--one might also ask, why purge a passing tramp?

Series sleuth Sergeant Cribb, like Sergeant Beef another candidate of mine for a Great Detective, takes Harriet under his wing while he conducts the murder investigation, which involves trailing the suspects up the Thames with Harrriet; redoubtable Constable Thackeray, the series's superb second banana; and, of course, Constable Hardy. (Will love bloom?)  Eventually the gang ends up in Oxford, and the novel becomes a college mystery of sorts, as there is a second murder, this time of a don fishing on the river.

Swing, Swing Together is simply a superb detective novel, arguably the best in the Cribb series.  There is so much to like: the clever homage to JKJ, the relationship of Cribb and Thackeray, Harriet and her classmates and her amusing romance (Lovesey handles women characters much better than your average male detective novelist, at least his spiritual forebears from the Golden Age of detection).

And the plot is quite clever indeed.  There is excellent use of some classic gambits, and some brilliant feints and twists.  (At one point you will ask yourself, is he really going to go there?  I'll leave it to you to see whether he does.)  Lovesey fooled me once again, concerning the matter of culpritude, something I flatter myself that it is hard to do, but it's all done fairly.  Surely someone who quotes the Eton Boating Song would always play fair!

Peter Lovesey told me he thought the Cribb series was getting a little too lightly humorous with this novel, and he wrote the rather grim Waxwork, the last in the Cribb series, as something of a corrective to mirth.  Waxwork is a brilliantly done book, but I must admit I prefer Swing, Swing Together.  Lovesey's gift for this sort of ebullient manners mystery is immense, and it makes for a memorable and delightful crime novel.  They don't all have to be noir, folks!  As Robert McCrum has stated, "Humor in literature is often not taken as seriously as it deserves."  The same holds true of crime fiction, a branch of literature, whether in its lighter or darker forms. 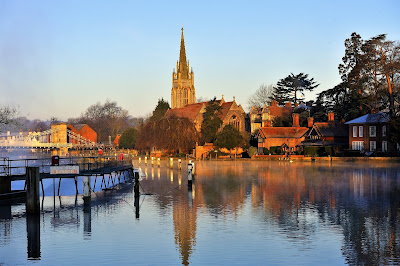 Obligatory ancestor mention:  Some Passing Tramp readers have noticed that I tend to mention ancestral connections to books and authors on the blog.  Well, here we go again with another: my ancestor Richard Buffington, though whom I'm connected to Raymond Chandler, as well as singleton mystery writers Alfred Meyers and Ada Lingo, recently reissued by Coachwhip.

Richard Buffington, who came to American shores in 1677 as I recollect and died many decades later in Pennsylvania at the age of 94 (his 85th birthday was written up in Benjamin Franklin's Philadelphia Gazette), came from Marlow on the Thames (or Great Marlow as it was known in his day), a town which plays a significant role in both TMIAB and Swing, Swing Together.

Buffingtons lived at Marlow (pictured upper right) for many generations, though I don't know whether they ever were involved in any murders!  In America the New England branch of the Buffingtons included witnesses at both the Salem Witch Trials and the Lizzie Borden Trial, so they did seem to have something of a flair for being on the scene, so to speak.  Suspicious, eh?


And some very good news: Now nearing fifty years since its launching, the Cribb series, already available from Soho in the US, is being reissued this year in the UK by Sphere.  Get to reading, if you haven't already!  Swing, swing together, with your bodies between your knees!  Or, wait--that's rowing, not reading, right?
Posted by The Passing Tramp at 2:58 PM