The Natural Laws of Mystery Writing: Q. Patrick's The "Naughty Child" of Fiction

In an essay called "The 'Naughty Child' of Fiction," which was published sometime around 1940, Q. Patrick--almost certainly Richard Wilson Webb rather than Hugh Wheeler, for Webb took on this name for essay writing, while Hugh Wheeler took Patrick Quentin--laid out his own rules, or laws I should say, for the writing of detective fiction.

The answer may have seemed flippant, but there was a certain amount of seriousness in what I said.  The mystery in Jane Austen's work, of course, is not Who killed Whom, but Who will marry Whom.  And Elizabeth Bennett is a charming detective, very suitably and very prettily involved herself in this problem.

As an aside, I should mention that Webb was finding solace in the pages of Jane Austen when he was serving in the Red Cross in Indonesia during the Second World War by reading Austen's Emma, which in a letter to Wheeler he again praised, like PD James later would, as a mystery.  Interestingly, Emma, was, as I recollect, the favorite novel of Rex Stout, who made a point of reading it every year. 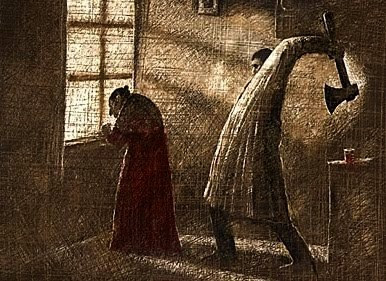 In his essay Webb also noted that his second favorite novel was Fyodor Dostoevsky's Crime and Punishment, which he also maintained was a mystery, because the author, "with consummate skill, keeps his readers in continuous and almost unbearable suspense as to when and how the murderer will have to pay for his crime."

These preliminary observations made clear, QP noted that he belonged "to the school which deplores the fact that mystery novels and 'straight' novels are so widely differentiated, in rental libraries, reviewers' columns, and in reader's minds." He hoped the day would soon arrive "when the mystery story will no longer be considered the 'naughty child' of fiction, but will step boldly forward and assume the high rank it really deserves."

QP modestly allowed that "as yet no really great mystery novel--in the modern understanding of the word--has been written," but he insisted that the art of the mystery, "like that of the cinema, is still in its infancy," and he predicted that the great day eventually would come.

To help along the advent of that great day, QP laid down some of his own rules for writing mystery fiction.  Or rather I should say guidelines, as QP deprecated the idea of rules, in the process taking some potshots at S. S. Van Dine and England's Detection Club (and, implicitly, Ronald Knox).

From time to time a foolhardy detective story writer will set forth a new ten commandments for an awestruck tribe of neophytes.  The late S. S. Van Dine, himself an admirable craftsman, did this.  Of his numerous and arbitrary laws, one stands out for its conspicuous absurdity.  Mr. Van Dine stated categorically that in the ideal mystery detective novel there should be no love interest.  He might just as well have denied to the mystery story a business interest, a sporting interest, a money interest, an ambition interest, a society interest, of any of the countless other interests that are not exclusively deductive.  Mr. Van Dine might just as well have said that no mystery story writer should refer to an ice box or a tooth brush.

Love, in common with business and tooth brushes, is part of the everyday interest of normal people.  Consequently, it not only should not, it cannot be eliminated from any work which, like the mystery novel, must attempt to portray human beings as they are, might be, ought to be or ought not to be.

Turning to mock the Detection Club, QP added that

Several of the worthiest and most established English detective story writers have also succumbed to the temptation of proclaiming to the world that they have caged the murderous peacock for good and all in one particular cage (of their own construction).  With the British tendency toward medievalism, these authors have banded together into a Guild--a mystic cult to keep sanctified their own special brand of mystery novel, a cult in which they are their own Vestal Virgins.  One of their holiest axioms proclaims that more than one murder per novel is mere vulgar display.  This lady-like dictum seems to me to be as willful and unnecessary as Mr. Van Dine's prudish veto on love.  Perhaps they will be saying shortly that no heroine in any work of fiction should show interest in more than one man.
This attack on the supposed prudery and "ladylike" fastidiousness of traditional detective novelists is amusing, although I don't actually recall a Detection Club rule against more than one murder?  Certainly Van Dine proscribed love interest, and I have seen claims made that more than one murder in a detective novel dilutes the pure deductive interest, making the novel more a thriller.

The freethinking QP propounded that "there should be no rule whose function is purely negative or which forces writers into the straitjacket of hidebound traditionalism....the first and only unbreakable rule is that anything goes, provided the 'anything' is handled well enough."

I'd say QP pretty much predicted the future of the crime novel here!

However, QP declared that while

I believe that the incipient detective story writer should be given an absolutely free hand as to plot, choice of character, technique, style, I am by no means a nihilist.  There are certain unbreakable laws which govern the detective story as sternly as they do any other type of literary endeavor.

So no rules, but unbreakable laws.  Got it!  These are (get out your notebooks):

1. The law of Clarity

By its very nature, the mystery story runs the grave risk, when it is trying to be mysterious, of becoming merely confusing.  The ability to differentiate between mystery and confusion is perhaps the detective story writer's most essential requirement....a competent detective story must be written with the maximum of clarity in a clear, concise and controlled prose.

2. The law of Honesty

One's allegiance to Clarity should be linked with an equally unswerving allegiance to Honesty.  Just as the reader cannot be confused, so also can he not be cheated....Every detective story writer should print in blazing capitals on his office wall, that single word: MOTIVATION.  A reader, reading a detective story, assumes he is embarking upon a fair contest of wits with the author.  The author, if he wants to keep his public, cannot foul.  The most brilliant mystery in the world loses all of its stature if its final motivation turns out to be inadequate or "contrived."

QP urged that to achieve honesty, writers should write "about places you know.  Write about the people you know and skip the Duchesses and the Florida crackers, unless you happen to have some of either in the family."

3. The law of Originality

Let Dashiell Hammett alone with his own two fists; leave Dorothy Sayers' intellectual tongue in her cheek; yield to Mignon Eberhart her doomed brides; walk quietly away when Leslie Ford tortures herself with that anguished cry: Had I But Known.  They are doing their jobs their own way and they are doing them well.  They and their public have no need of you.  Write your own kind of mystery story.

QP went on to explain what distinguished his Q. Patrick writing from Webb and Wheeler's other two pseudonyms, Jonathan Stagge and Patrick Quentin,  This may interest the fans out there.

Patrick is a plodding, methodical sort of chap who pins up a huge chart above his desk from which he can tell you where any given character was, what he or she was doing, at any crucial moment in the book.

Stagge is a mixture of the homespun and the scientific.  He surrounds himself with medical books and at the same time finds himself watching his friends' children for pointers on adolescent psychology and dialogue.

Quentin is a hard-boiled guy who rattles off his stories in the vernacular with no books of reference but a slang dictionary.

However, all three shared this trait in common: "They spend several weeks of fevered thought and conference on each plot before the first word is committed to paper."  QP urged new writers to "see that your [story] is thought out before you begin.  Think of your plot forwards and backwards."  They should put themselves first in the place of the murderer, planning the crime, then successively in the place of each of the major suspects in turn, thinking through their motivations for their actions.

QP concluded, somewhat forbiddingly, that "writing a mystery story is quite an undertaking.  It needs not only genuine writing ability; it needs ingenuity, patience, originality and hard work.  It needs absolute clarity and absolute honesty.  It is not to be embarked upon unless one is prepared to shun delights and live laborious days."

Are you ready to assume the mantle of a mystery writer?
Posted by The Passing Tramp at 4:21 PM