New England Gothic I: The Man in the Net (1956), by Patrick Quentin

It was after six and the train had passed Sheffield [Massachusetts].  John Hamilton...looked out at the familiar New England summer evening--the parched meadows, garish with black-eyed Susans and devil's paint brush, the distant, wooded mountains, the scattered white clapboard houses, lawns shaded by sugar maples, a peony or two, narrow beds of phlox--sedate, pastoral, faintly sad.
--The Man in the Net (1956), Patrick Quentin

After publishing The Man with Two Wives (1955), Hugh Wheeler set his next Patrick Quentin novel, The Man in the Net (1956), not in swanky New York City but rather in the Berkshire Hills of Massachusetts, where he himself had primarily resided since 1940 (excepting the period of time during World War 2 when he was stationed at Fort Dix) and would live until his death in 1987. 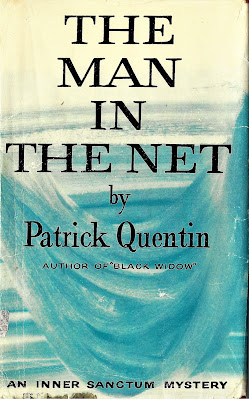 Wheeler loved the home he made in the Berkshires, first with his writing partner Rickie Webb and then with his black chauffeur, cook and companion, known simply as "Johnny" to his friends; yet the rural New England he portrays in The Man in the Net is hardly idyllic but rather more in keeping with the dissonant portrayals one finds in the fiction of Edith Wharton (Ethan Frome, 1911, "Bewitched," 1925, "All Souls," 1937) and the contemporary fiction of crime writer Ellery Queen (The Glass Village, 1954) and genre-bending author Shirley Jackson ("The Lottery," We Have Always Lived in a Castle, 1962).  Rather than celebrating rural New England as the star-spangled cradle of American Independence, these books portray the region as a frightening backwater festering with ignorance and intolerance toward outsiders and nonconformists.

Although New England is synonymous in the public mind today with "liberalism" (as represented by progressive pols like Bernie Sanders and Elizabeth Warren) at the time Wharton, Wheeler, Queen and Jackson were writing their books singificant swathes of the region were still highly conservative and "rock-ribbed Republican."

In the 1932 presidential contest between Republican incumbent Herbert Hoover and Democratic challenger Franklin D. Roosevelt, which took place when the country was in the midst of a calamitous economic depression largely blamed by the public on Republican misgovernance, Hoover lost by a landslide, winning only six states, four of them in New England.  The Republican barely won New Hampshire and Connecticut, but he bested FDR in highly rural Maine by 13% and Vermont by 17%.  Massachusetts he lost by only 4%, though he lost Rhode Island by 12%.--all the while losing the country as a whole by a whopping 18%. 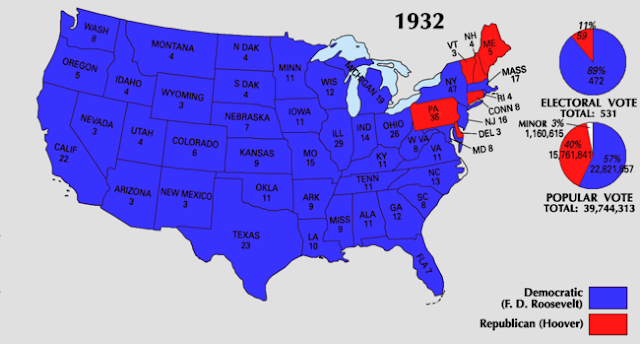 In 1936, Roosevelt won reelection against his hapless Republican opponent, Alf Landon, by 24%, with Landon managing to take just two states--Vermont and Maine, by about the same margins the Republicans had won by four years earlier.  New Hampshire went for FDR by only 2%, while Massachusetts went for FDR by 9%, substantially less then the national average.

Vermont and Maine stood steadfast against FDR in every presidential election, in fact, and then in 1948 they were joined again by New Hampshire and Connecticut in favoring Republican Thomas Dewey over Democratic incumbent Harry Truman.  Truman won nationally by 4.5%, but in Vermont there was a Republican rock slide against him, with Dewey flattening Truman by 23%.  And naturally in 1952 rural New England "liked Ike," even more than the rest of the country did.  Dwight D. Eisenhower won over Adlai Stevenson nationally by 11%, but in Vermont, the war hero beat the egghead by 43%.

This perhaps tedious political exegesis may help to partly explain the negative portrayal of rural New England in the writing of the liberal Wheeler, Queen and Jackson.  (Wharton was no liberal in a lot of ways, but she was a cosmopolitan--some might say a genteel snob--who ultimately left the U.S. for France.)  And New England was conveniently at hand to these writers, which helps explain why they weren't writing about actual terrible things going on at this time in the American South, where state Democrats maintained sway through systematic, institutionalized racism, but rather imagined horrors in the home of American Puritanism.

Cosmopolitan Hugh Wheeler spent much of the year in the Berkshires, between jaunts to New York and the Caribbean, Shirley Jackson lived in North Bennington, Vermont, where her highly intellectual husband, Stanley Hyman, was on the college faculty, and native New Yorkers Frederic Dannay and Manfred Lee of Ellery Queen were familiar with upstate New York and New England, a region which in their Forties and Fifties crime fiction they both idealized as apple-pie Wrightsville and damned as crabapple Shinn Corners, a brutish hamlet of repulsive bigots.

In Wheeler's The Man in the Net, the setting is the deceptively lovely Berkshires village of Stoneville, perhaps named with Shirley Jackson's "The Lottery" in mind.  (Readers of the story, which apparently was inspired, like We Have Always Lived in a Castle, by North Bennington, will get the reference.)  To Stoneville from New York City has come John Hamilton and his wife Linda, a, well, brittle, nasty, neurotic, viciously scheming drunk--though quite charming, don't you know, on the surface.  John has left his good job as a commercial artist and brought Linda with him to Stoneville to get them out of the New York social rat race, which was driving Linda positively dispso, and also to take up painting full time.  The man is determined to follow his muse, art, while keeping his wife away from her muse, booze.

John has managed to keep Linda's drinking a secret in Stoneville, and not only has she won social acceptance into the tiny snobbish clique of wealthy families of Stoneville--Brad Carey and his California-born wife, Vickie; old Mr. Carey and his wife, owners of a paper mill; and Gordon and Roz Moreland, authors of "almost-best-selling"historical novels" (the Fosters are out-of-town for the summer)--she has charmed the humbler locals of "the village," especially the strutting "local Don Juan," Steve Ritter, owner of a gas station and ice cream parlor and town sheriff, who is "almost a parody of the comic-strip muscle-boy hero."  The type that kicks sand in the faces of 98-pound weaklings.


Linda is getting bored with one-horse (and no bars) Stoneville, however, and with that boredom comes restless drinking and scheming to get back to New York.  John's one-man art show seemingly has failed, and both the elite and the villagers in Stoneville look on him with bemused contempt, saving their sympathy solely for the plight of the putatively long-suffering Linda, forced to submit to her eccentric husband's odd whims.  Linda deviously decides to play on this misplaced sympathy.

The only denizens of Stoneville whom John really gets along with are a small gang of village children: Emily and Angel Jones, daughters of the village postmistress; Leroy Phillips, son of the young Careys' butler and cook; Buck Ritter, son of Steve Ritter and his put-upon wife; and Timmie Moreland, son of Gordon and Roz Moreland.  Modern readers, hearing seemingly continual news of church and college sex scandals, perhaps will be apt to look askance at the relationship of this thirty-something man with these young children, but if you can take it as it no doubt was meant--the epitome of innocence--it's an interesting aspect of the book, which was published in an era when children in mystery fiction were increasingly becoming not only seen but heard.*

*(Of course it doesn't help with modern perceptions that Emily and Angel are portrayed in somewhat hard-boiled terms, as the "good girl" and "bad girl" respectively.  But then compare with Fredric Brown's portrayal of the adolescent girl in the much-lauded and award-winning crime novel The Fabulous Clipjoint, 1947.)

John's problems with the all-too adult Linda come to a head when she, attempting at a party to explain a puffy eye incurred in a drunken fall, accuses John of having belted her a rather good one.  When Linda disappears a few days later, it's not altogether surprising that Stoneville--seemingly to a man and a woman if not a child--soon comes to believe that John killed her and disposed of her body.  John thinks he's been set-up--but just by whom?  Will he have time to find out before he gets jailed--or lynched?  In this tense section of the novel I was forcibly reminded of the works by Ellery Queen and Shirley Jackson mentioned above.

For lovers of anxiety crime fiction, The Man in the Net certainly fills the bill.  At the same time, there is a neat central crime puzzle to solve and some excellent acerbic writing and character portraits.  Wheeler is withering in his portrayal of Gordon, the village's pompous "conventional eccentric" (as Wheeler cleverly puts it), and Roz Moreland, his artificial-to-her-core wife.  Here she is prating of her son, Timmie, and his friendship with Leroy, the son of the younger Carey's butler and cook, and another boy of color:

"Timmie dear, go out and look for that cunning little colored boy who's such a pal of yours.  You know, Mr. Hamilton, Gordon and I think it's absolutely absurd to put up barriers.  In Marakeesh, winter before last, Timmie had such a cute Arab side-kick.  Abdullah, such an enchanting Arabian Night's name."

Roz Moreland patted her son on the head.  "Now, darling, don't be difficult.  Just run off an play with your little friend."

After you, my dear Alphonse!

Leroy and his parents, some of the few black characters I can recall in the author's oeuvre, are very sympathetically presented and obviously draw partly on real life acquaintance.  As does Linda, herself, Wheeler having had ample reason to know firsthand the problem of what to do with a needy, substance-dependent partner whom one once had greatly loved but now just wears one down.

In the latter part of the novel it's Leroy and the other children whom John finds himself relying on for help when the adults of Stoneville turn on him (with one or two exceptions) and he becomes a fugitive from Stoneville's law.  Can the kids help get him out of the net?  And just what has really happened to not-so-lovely (on the inside) Linda?

The Man in the Net was filmed, under the same title, in 1959, but apparently the film was not too successfully done.  A 46-year-old Alan Ladd played John and a 29-year-old Carolyn Jones portrayed Linda.  The latter thespian, much underrated, I can definitely see in the role, the former, Ladd, not so much.  Maybe a few years earlier they could have gotten Montgomery Clift.  Patrick Quentin was not that well-served by American film adaptations on the whole, though Black Widow is pretty good.  I reviewed that film here, almost four years ago to the day.
Posted by The Passing Tramp at 1:42 AM