“But, Johnny, we’ve got to trust somebody.”
“Not I!  I don’t trust anybody until I know where they stand. When the F.B.I. starts investigating Martin Dies and Hamilton Fish and the rest of that crew, then I’ll know I can trust them—not before.”

“….in every country the aim is the same….Make the people within each country hate each other.  Put white against black, gentile against Jew, boss against worker.  Keep them busy hating each other.  The old divide and conquer idea.”
--Johnny on the Spot (1943), by “Amen Dell” 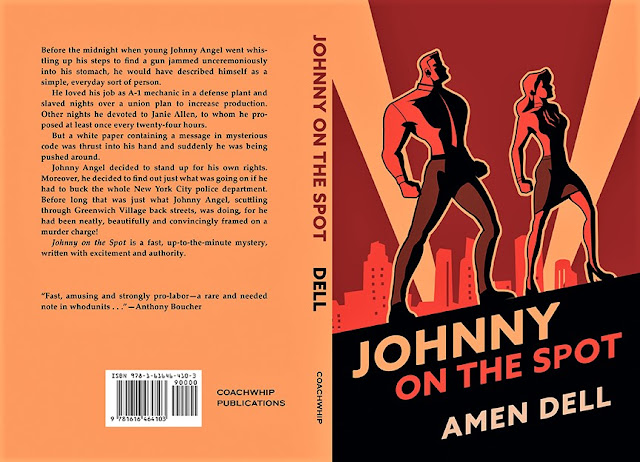 Note: For Labor Day I thought I would take a look at a Forties thriller reprinted by Coachwhip, Johnny on the Spot (1943), for which I wrote a long introduction.  The book was much praised by crime fiction critic Anthony Boucher.  On the interesting life of Irving Mendell, aka Amen Dell, see this earlier blog post.  As the years go by I come to believe more and more that we have much to learn (or relearn) from the Thirties. Another review of a "labor" mystery, one from the 1950s and by a woman author, will be posted here soon.

Irving Mendell’s crime novel Johnny on the Spot is a spirited wartime thriller with an engaging cast of characters, strong sense of time and place and an admirably snappy narrative pace, yet its most striking feature is the perceptible leftist tilt of the narrative.  Although in their different ways authors as popular yet diverse as the Communist Dashiell Hammett and the Catholic G. K. Chesterton cast doubt in their crime writing on the morality of the capitalist system, mystery novelists from this era tended to take a far more complacent view of the western status quo, portraying political leftists as, at best, comically naïve Utopians and, at worse, dangerously unhinged firebrands.  In Johnny on the Spot, however, Irving Mendell portrays the political state of the world in rather a different light.


In the novel, which is set during the first year of American entry into the war, the titular on-the-spot character is Johnny Angel, “mechanic, grade 1, at the huge Hirdler Automotive (H. A. to the public) plant,” now doing defense work for the government.  As his surname broadly hints, Johnny, a union representative at H. A., is on the side of the forces of light, having conceived an ingenious plan to increase war production at his factory, materially aiding the fight against fascism, though so far the higher-ups at H. A. have evinced little interest in it.  In making the case that unions are essential to carrying on the war effort, Johnny on the Spot is reminiscent of another wartime mystery novel, Murder at the Munition Works (1940), by G. D. H. and Margaret Cole, prominent English public intellectuals and socialists who also dabbled in detective fiction. However, Johnny is much more entertaining.
Through a case of mistaken identity Johnny Angel is handed, while standing outside his third-floor apartment on Charles Street in Greenwich Village (where Mendell himself resided), a piece of paper containing what appears to be some sort of numerical code.  It soon becomes clear that certain mysterious dastards are more than willing to kill to get this piece of paper back.  Along with his goodhearted but luxury-loving girlfriend, Janie Allen, and a ravishing redhead suggestively named Mae Wells, Johnny soon finds himself embroiled in a murder mystery with grave implications indeed for the security of the United States.
Mendell took the opportunity in Johnny on the Spot not only to jab at conservative congressmen like his own personal nemesis Martin Dies and the arch-isolationist Hamilton Fish III, but also to flay crooked cops and capitalists, racists, anti-Semites and fascist fifth columnists.[1]  Even Johnny’s on-again, off-again girlfriend, Janie, a spirited lass evidently based partly on Mendell’s own wife, Anne, is continually tempted from the path of righteousness by the lure of life’s luxuries, on account of the independence they represent.  “You have no idea how fed up a girl can get on R.K.O. and ice cream sodas,” she sighs at one point.  In a conversation with Johnny, she attempts to analyze her conflicted feelings:

“Johnny….I don’t know what I’d do without you.  Sometimes, I wish—well—that I could be like other girls and be satisfied with the idea of marriage and babies and all the rest of it.  But I’m not and that’s all there is to it.  You’ve been swell about it, Johnny.  And I promise you this: if the time ever comes when a husband and babies are more important to me than the prospect of having satin sheets and forty pairs of evening slippers and rooms full of gowns to choose from and a penthouse apartment--
She noticed his face and gripped his arm.  “Oh, Johnny, can’t you understand?  I don’t want satin sheets because they’re comfortable.  They’re a—a token—a symbol of freedom—of independence.  For as long as I can remember I’ve had to take orders from somebody….That’s why I don’t want to tie myself down.  To start taking orders from a husband instead of a boss.  I want to be free!  I’m tired of counting pennies….[2]

Johnny at one point accuses Janie of being “dumb when it comes to unions,” explaining to her that he and his fellow workers at H. A. would never actually go on strike during the war: “What do you think we are, anyway?  The army needs the things we make.  That’s what we’re fighting Hirdler about.  If he’d use our plan, we could turn out twice as much.  But he won’t listen.”  But while Janie may be naïve about unions, other individuals in the novel, like Lieutenant McWilliams of the New York City Police Department, are openly hostile.  “He’s just the kind of cop who goes out breaking up picket lines for his own amusement,” scornfully observes Johnny of McWilliams, while policeman John Joseph Swazey opines that McWilliams would not hesitate for a minute to frame Johnny Angell for murder on account of Johnny’s being a union official, because McWilliams deems unions “un-American.”  (Swazey himself, a decent cop at heart though something of a palooka, admits, “Before I joined the force I worked in an auto plant for a coupla years.  We had a union, a good one, too.  Did plenty for the men.  And today it’s doing plenty for the war.  But that doesn’t change Mac’s feelings.”)  Similarly, as evidence of a widespread rightist conspiracy mounts around him, Johnny complains that United States Attorney General Francis Biddle “piddles over guys like Harry Bridges” (an Australian born labor leader whom the AG tried to have deported under the 1940 Smith Act, on the grounds of his having been once “affiliated” with the Communist Party USA) while letting “rats run loose.”
Mendell sees the rats, the real threats to American democracy, as racist right-wing authoritarians, sometimes organized in groups like the Christian Front (associated with the controversial radio priest Father Charles Coughlin), who, if not themselves necessarily Nazis, are ideological “fellow-travelers,” if you will.  “The anti-Labor, anti-British, anti-Russian, anti-Semitic, anti-Negro, anti-American sons of bitches!” an appalled Johnny exclaims after finally cracking the dire meaning of the coded message, rolling out in a rising wave of “anti’s” all the objectionable qualities of these people.  Referencing President Roosevelt’s fireside chat of April 28, 1942, Johnny thinks how true it is that “Bogus Patriots and Noisy Traitors” are insidiously undermining the war effort and the country.  Readers of Johnny on the Spot should of course rely upon their own powers of discernment to determine which characters in the novel are (and are not) to be trusted; suffice it to say here that, when you find that your neighbors read The Brooklyn Tablet, you might well take heed.[3]


[1] Dies, a critic of the Congress of Industrial Organizations (a group that had supported Mendell during his fight with Federal Theater Project New York City director George Kondolf), declined to run for reelection after the CIO began a voter registration in his Texas district and found a candidate to oppose him.  The same year Hamilton Fish III was defeated in his bid for reelection in his New York congressional district.  Fish sourly credited his defeat to “Communistic and Red forces from New York City….”  Another, rather more famous, crime writer who abominated Hamilton Fish III was Rex Stout, who in 1930 built his house in Connecticut across the state border (though his mailbox was in New York), so he would not have Fish as his representative.
[2] Mendell tellingly dedicated his novel to ANNE, who also wants satin sheets, but who would never enjoy them if she knew Fascism still anywhere in the world.
[3] Spoke the President:

This great war effort must be carried through to its victorious conclusion by the indomitable will and determination of the people as one great whole….It must not be impeded by a few bogus patriots who use the sacred freedom of the press to echo the sentiments of the propagandists in Tokyo and Berlin. And, above all, it shall not be imperiled by the handful of noisy traitors—betrayers of America, betrayers of Christianity itself—would-be dictators who in their hearts and souls have yielded to Hitlerism and would have this Republic do likewise.

Seventeen men, all residents of Brooklyn and most Christian Front members, were arrested by federal agents in January 1940 and charged with stockpiling weapons as part of a plan to overthrow the government.  Although the charges were dropped the next year, the incident assuredly was in Mendell’s mind when he wrote Johnny on the Spot.  The Brooklyn Tablet was a prominent diocesan newspaper that backed the Christian Front.
Posted by The Passing Tramp at 1:25 AM