Stonewalled: Writing One's Self in an Age of Oppression and an Age of Liberation

This weekend saw nationwide celebration of the fiftieth anniversary of the Stonewall Riots (June 28-July 1, 1969), when members of the LGBTQ community of Greenwich Village took to the streets to fight back against a police raid at the Stonewall Inn, a local LGBTQ-friendly establishment.  The confrontations between police and locals around Stonewall took place on the first two nights/mornings, but altercations continued in the area over the next several days.  As late as July 2 newly energized queer activists threatened the offices of the newspaper The Village Voice, which in describing the riots had written obnoxiously of the "forces of faggotry" and their "Sunday fag follies."  Declared one exasperated queer sympathizer: "The word is out....The fags have had it with oppression." 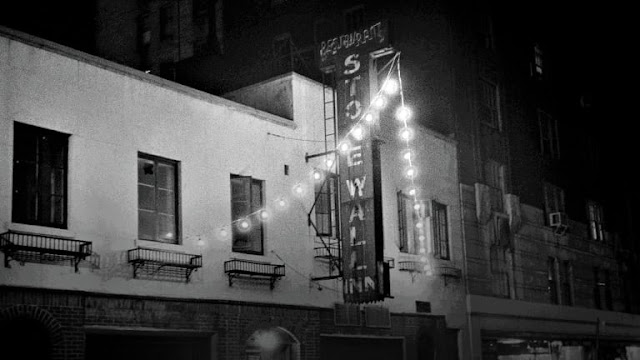 Crime writer Richard "Rickie" Wilson Webb had been dead three years when the Stonewall Riots took place, but his writing partner and longtime companion Hugh Callingham Wheeler was still around and in fact would live for another eighteen years, during which time he attained his greatest fame as a book writer for several Broadway smashes, including Stephen Sondheim's Sweeney Todd.

I have no evidence about what Hugh's attitude was to the highly public ructions around the Stonewall Inn in 1969, though I know that like many men and women of his persuasion, he was circumspect about his lifestyle.  It was not something he talked about with his family, up until the time he died.  Both his Seventies stage collaborators Stephen Sondheim and Harold Prince knew he was gay, though they knew little else about his personal life.  Conversely, Rickie's sister Freda knew all about his relationship with Hugh, but when last year I attempted contact with Rickie's nonagenarian nephew (the son of another sibling), he freezingly told me: "Thank you for your enquiry about my uncle.  I am not in a position to help you."

Even today, when one is writing about gay writers one encounters this sort of queerly persistent resistance.  Not just from family members who feel they still have shameful secrets to hide about their loved (or perhaps not so loved) ones, but from seemingly unoffending people who blithely pronounce that one's "personal life" is irrelevant to one's writing.

Have you ever noticed that no one ever says this when the person is heterosexual?  No one questions delving into the personal relationship of Frederic Dannay and Manfred Lee, the (straight) cousins who wrote as Ellery Queen, or, presumably, that of Richard and Frances Lockridge, the married couple who between 1936 and 1963 penned 27 Mr. and Mrs. North mysteries.  Yet until recently there was no acknowledgement anywhere that Lockridges contemporaries Richard Webb and Hugh Wheeler for nearly two decades were a couple.  Sometimes one feels that for decades the mystery world has been operating under the archaic principle of don't ask, don't tell.

However, just like Dannay and Lee, the two men's personal relationship impacted their writing as Patrick Quentin, Q. Patrick and Jonathan Stagge.  Indeed, the breakdown of their relationship ultimately put paid to their collaborative writing.  It's often stated that Rickie's "declining health" led to his retirement from the writing partnership.  To the contrary, Hugh's growing personal estrangement from Rickie led to the demise of their collaborations.

Certainly Rickie and Hugh, like other gay people of their time, had ample cause for a certain amount of circumspection, both in their lives and in their writing.  In the chilled heart of the Cold War era, during the Fifties and Sixties, gay men and lesbians were considered security risks on account of their "perversion" and could be, and were, fired from their jobs, with no recourse.  J. Edgar Hoover's ever-intrusive Federal Bureau of Investigation kept records on homosexuals (ironically given Hoover's own inclinations), while the US Post Office banned books with queer content (even incredibly mild stuff by today's standards), on the grounds of "obscenity."  The American Psychiatric Association classified homosexuality as a mental disorder until the 1970s.

People of the same sex congregating publicly as homosexuals was illegal, as was cross-dressing, while even private homosexual acts between consenting adults were outlawed.  Simply to be identified as gay or lesbian or queer in some way was to put one's livelihood at risk.

An influential guide to mystery writing published in the 1940s, when shocking gay murder scandals were making newspaper headlines, advised prospective authors to stay away from anything savoring too closely of real life, when it came to sexual matters:

Sexual perversions, other than sadism, are definitely taboo....Homosexuality may be hinted at, but never used as an overt and important factor in the story.  An author may, in other words, get away with describing a character in such fashion that a reader may conclude the character is homosexual, but he should not so label him.  All other perversions are definitely beyond the pale.

This is the silly, Miss Grundyish regime LGBTQ mystery writers had to contend with up until the time of Stonewall, though cracks had started appearing in the closet door some years earlier.  Perhaps this is one reason that queer men and women (and indeed any emotionally reticent people) were so attracted to writing mystery fiction in those days (and they were): Classic crime fiction was about hiding personality, not revealing it, with emphasis put on the solving of the puzzle, not on deep explorations of character.

Yet in fact Rickie and Hugh wrote mysteries that were about as reflective of their authors as they could be, given the times.  They were discreet, but they were not desperately in hiding.  They put their own intriguing personalities into their work, and that work thus makes for compelling reading.

But was it gay enough?  Mystery writer Christopher Fowler seems to think not.  Early last year--a few days before a book I edited, Murder in the Closet: Essays on Queer Clues to Crime Fiction Before Stonewall, was nominated for an Edgar--Fowler published an article in which he opines:

[W]riting is best when you can tell the writer is being honest.  Patrick Quinten [sic] wrote the "Puzzle" series of hardboiled detective stories, and I quickly noticed that the author was lying to me.

When I read "Puzzle for Puppets," in which two lines are spent describing the detective's wife, and half a page is reserved for the descriptions of muscular marines in a San Francisco bathhouse, it was obvious that the author was, quote, not "the marrying kind."

"Authors should not try to hide their natural instincts," Fowler rather loftily lectures in the modern day.  Elsewhere, he pronounces that "gay writers" in the 20th century were "very good at denigrating themselves.  Social pressure created shame and self-hatred that surfaced in writing."

This is all too easy to write in 2018, Christopher!  If only things had been as easy for queer crime writers back then as they are today.  But despite societal pressures, gay and lesbian writers in mid-century America were not invariably (and oh-so stereotypically) ashamed and self-hating. More than a few of them in fact had some reasonable measure of pride.

I thought the pugnacious response on Christopher's website of my friend John Norris of the Pretty Sinister blog, a contributor to Murder in the Closet, was generally on point:

I'm sure you know that Patrick Quentin is really two men.  Neither ever hid who they were even in their books.  Richard Webb and Hugh Wheeler lived together for much of their life and and it has been proven that they were a couple as well.  Their books are rife with gay allusions and talk of male beauty and physiques.  Saying that they were "lying to you" is actually a lie itself.  The bathhouse sequence in Puzzle for Puppets is the most overt example of their love of discussing male physiques (which happens in every one of their books by the way), but then you try to make it appear they are dishonest because the series is about a married man and woman and they don't spend as much time describing the wife.  Give me a break.  How is that being lied to?  You don't bother to mention that Pete and Iris have a healthy sex life in that same book and it's also discussed and joked about with the same candor as the naked men in the bathhouse.

Hear, hear!  Webb and Wheeler had an open-minded and dare I say adult attitude to sex in general. Fowler's view I find depressing because it balkanizes us all into the cages of our respective categories, be they sexual, racial, gender or what have you.  If we take this kind of thinking seriously, gay men could only write about gay men, lesbians about lesbians, blacks about blacks, whites about whites, straight men about straight men, straight women about straight women, etc., etc., etc.  How limiting this attitude is!

Not to mention that Fowler essentially would have cast Rickie and Hugh, talented crime writers both, out of crime writing altogether, along with other able LGTBQ authors like Rufus King, Todd Downing, Milton Propper, George Bellairs, Leo Bruce and Mary Fitt.  (Given his love of cross dressing, incidentally, was Rufus King a transgender crime writer?)

Until after World War Two, almost no one in the United States was writing crime fiction about explicitly identified LGBTQ characters, and when in the postwar years they did these characters were usually negatively portrayed--see the revolting books of Mickey Spillane, for example--or placed decidedly at the periphery of the action.  If Rickie and Hugh had made Peter Duluth gay--Peter Stonewall let us call him--they would not have found a publisher.  But why in the world should they have had to make Peter gay in the first place?

The two men actually wrote quite well about straight people, all the while not betraying their essential selves, as Fowler seems to think they did.  Throughout Rickie and Hugh's books there is, to be sure, evidence of a certain gay sensibility, which was as quickly clear to me and to John, I suspect, as Fowler says it was to him--though admittedly it seems to have gone completely over the heads of many contemporary reviewers.  Let's discuss Rickie and Hugh's crime fiction and their lives honestly, by all means, but at the same time let's try to enjoy it for what it is, not penalize it by imposing some confining, purportedly progressive, ideological agenda upon it. Gay writers can write expansively about the human condition, just like straight writers.  To assert otherwise is to attempt, whether this is one's intention or not, to restrict them to a sort of ghetto.

While I find Hugh and Rickie's work the fascinating and remarkable product of an age of LGBTQ oppression, I believe it can be enjoyed by anyone who likes good vintage crime fiction.  Much worthy writing has been produced under the stresses of adversity.

For more on the subject of LGBTQ writers and themes in crime fiction published before Stonewall, see the 2018 Edgar-nominated Murder in the Closet. 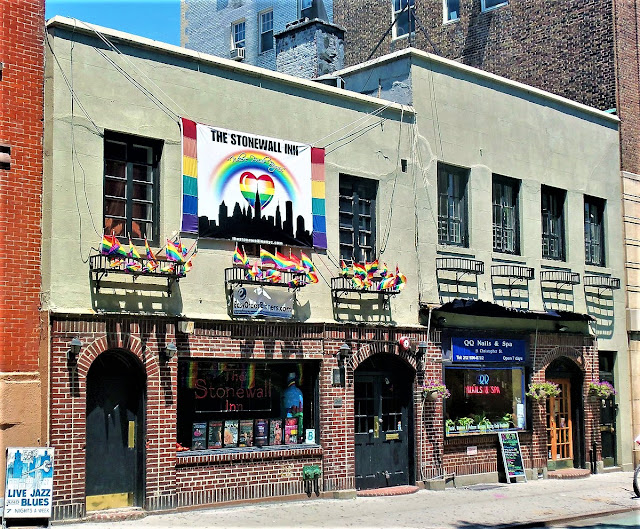 Posted by The Passing Tramp at 5:57 PM