Someone had finally gone out to the kitchen and brought in enough wood to build up the fire.  Red and yellow flickered in warm shadows across the room.  But it was false warmth: you didn't forget for an instant that the house was circled with cold; that there was a deeper chill of fear in the room.--Death at Dayton's Folly (1935), by Virginia Rath 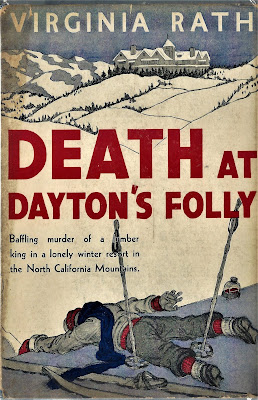 Californian Virginia Rath (1905-1950) published thirteen detective novels between 1935 and 1947, all of them set in the Golden State, all of them shortly to be reprinted by Coachwhip.  The first five of the novels comprise the Sheriff Rocky Allan series and the second eight the Michael Dundas series, though the second novel in the Dundas series, Murder with a Theme Song (1939), might arguably be seen as a Rocky Allan novel, for the lawman plays a large part in the proceedings.

Rocky Allan is a handsome and homespun sheriff in a rural mountainous northern California county based, I believe, on the real life Plumas County, where Virginia Rath lived and taught school for five years.

Michael Dundas is a couturier--the resolutely straight Dundas doesn't like to be called a dressmaker--in San Francisco, where Rath lived as a child from 1906 to 1912 (her family moved there, about six months after the San Francisco earthquake, when she was a year old) and as an adult from 1931 until her untimely death at the age of 45 in 1950.

In their day Rath's mysteries were praised by critics for their complex fair play puzzle plots and believable characters and authentic settings.  Indeed, the author is one of the important regional, or "local color," mystery writers of the period, her settings playing a key role in her tales. But where a lot of vintage mystery fans probably are familiar with Golden Age American mysteries set in New England or the South, say, they may not have read many (or any) detective novels from the period set in rural northern California.

For me this unusual setting greatly enhances the Rocky Allan mysteries.  Noted crime writer mystery genre authority and Bill Pronzini felt the same way, praising both of Rath's series but saving particular praise for the Allans.  Conversely Don Herron, author of The Dashiell Hammett Tour (1991; rev. ed. 2010) and The Literary World of San Francisco (1985), has lauded Rath's Michael Dundas mysteries, many of them set in the City by the Bay:

For around a quarter of a century I had a nice little hobby going, collecting crime fiction set within the San Francisco city limits.  Hammett started that one off, of course, but I discovered quite a few other writers I liked in addition to the creator of the Continental Op--Samuel W. Taylor, David Dodge, and Virginia Rath personal favorites among them.

Rath is far away my favorite of her contemporary group of women crime writers--Mary Collins, Lenore Glen Offord and company.  Her mysteries especially good use of the stair-streets on Russian Hill where she lived, making Rath a solid precursor to the end of the film Sudden Fear (1952), where Jack Palance chases Joan Crawford around the same steep grades.

I'll have more to say more at Rath's life in future posts, but today I want to look at her delightful debut Rocky Allan mystery, Death at Dayton's Folly [DADF], which Rath dedicated to her strapping, German-heritage husband, Carl Rath, a telegrapher on the Western Pacific Railroad.  (Her dedication admits that Carl "does not like detective stories," but happily he was a supportive husband.)

As befits a first mystery, DADF is Rath's most conventional book, employing the classic snowbound country house party setting--but what classic mystery fan doesn't like a snowbound country house party with a ruthless and cunning murderer running amok among the hapless house guests?  It's like Cyril Hare's An English Murder (1951), except that its murders are most decidedly star-spangled ones. 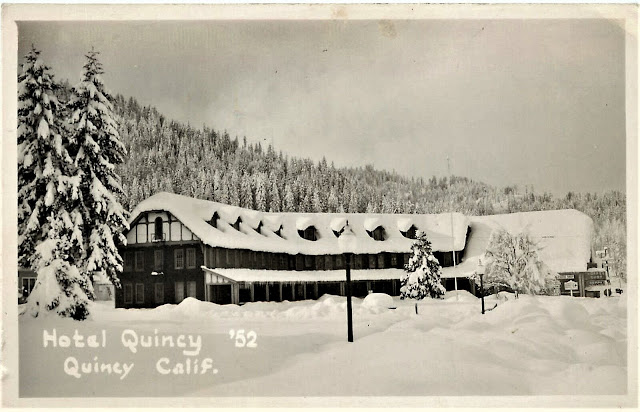 Rocky Allan, merely a young deputy sheriff and railroad employee in this one, is on hand to help his friend, trucker Dick Barnes, when Dick needs a wing man.  Dick, you see, has to carry a load of heating oil through a fierce sudden snow to Dayton's Folly, a rambling defunct hotel located near Greenleaf, a former lumber mill town apparently a few miles from Rio Linda, a small town north of Sacramento, the state capitol.

The aforementioned SacBee article notes that Rio Linda then was a mostly white, blue-collar town with a substantial number of households living below the poverty line, but that there were in the area "a few country estates worth close to a million dollars."  In Rath's novel, one of these estates back in 1935, when the novel was published, would have been Dayton's Folly.  The house and property has recently been purchased by millionaire San Francisco lumber man Alfred Leale, and, when the novel opens, he is holding a weekend family house party there.  Locals say the house should now be named Leale's Folly, and how right they prove.

Rocky Allan comes from a county with two towns that are constantly mentioned: Brookdale, the county seat, and Merton.  I think in the books this comes to be Plumas County, and the towns respectively of Quincy and Merton, but in this first book it's stated that Brookdale is about forty miles from Greenleaf and that would make Rocky's county more likely to be Butte County, I think, which neighbors Plumas to the southwest.  But in a later book Butte is mentioned specifically as an adjoining county to Rocky's County and for that and other reasons, I'm sticking with Plumas, where Rath actually lived.  (She also lived as a teenager on her parents' ranch in Colusa County, over to the west in the Central Valley, but that's a story for another time, though I should mention that Sutter County, immediately east of Colusa is another possible setting for this first mystery.)

Anyway, that's enough California geography.  The point to get here is that when Rocky and his friend Dick make it to Dayton's Folly, they encounter a gay sledding party outside the house, headed by Alfred Leale.  But it's only gay for a page or so.  Rath is not wasting her readers' time, for the millionaire promptly keels over and dies on page 11, after taking a fatal swig of brandy from his liquor flask.  Yes, the man's been poisoned!  Cyanide it seems.  And this being a very traditional mystery in many ways, it turns out that about everyone in the house party had reason to kill him.  Oh, those Golden Age house parties!  Ever so cozy, aren't they? 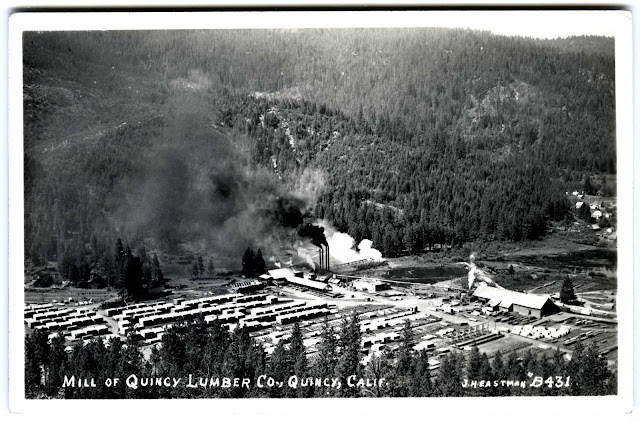 Rocky sends Dick back to Greenleaf to alert the local medico, Dr. Ames, and then get home before the snow accumulates too much for road travel.  That leaves Rocky, until Dr. Ames shows up, alone with the suspects.  These are:


Oh, and there's Alfred's private secretary, Pope, who you learn almost immediately is not a private secretary at all, but rather an undercover detective (of the genteel English type).  He was hired by the late Alfred Leale, who was worried someone was trying to murder him (smart man).

Pope works with Rocky to solve the case and actually plays a major role in this capacity. Virginia Rath once commented that Pope was supposed to be her main sleuth, but Rocky kept grabbing more and more of the limelight.  Pope would appear with Rocky in the next Rath mystery, Murder on the Day of Judgment, but by that time Rocky had decidedly gained the upper 'tec hand.  It would mark Pope's last appearance in the series.  I think Rath decided she wanted a more American sort of sleuth.  After all, the age of Philo Vance was fast waning in America. (Rath's mysteries were not to my knowledge published in the UK.)


This is a delightful Golden Age detective novel, indeed one which holds it own, I think, with better known, upper-tier books from the period.  There's a good plot with a lot of nice twists, good tension (phone and power lines both fail, as there's further murder and attempted murder), well-managed love interest (including for Rocky himself), a refreshingly adult attitude to sex and some wry humor.  Rath knows she's dealing with a classic bookish setup here and her characters comment on it:

"This is just like a book.  They always kill 'em just before they get around to changing their wills." (Rocky)

"There always seems to be--shall we call it love interest--mixed up with murder cases.  I am sentimentally inclined, but I don't like to have my attention distracted too much from more serious matters." (Pope)

There's also a cute bit where we learn Pope's and Rocky's true full names, Rocky being just a nickname.  I won't spoil!

Several people in the novel comment about how handsome Rocky Allan is: blonde, muscular, broad-shouldered and narrow-hipped.  Gracious, can this miracle man remain single for long?  I was almost waiting for the author to dub him "Handsome Allan."

Speaking of which, read DADF and see whether you like Virginia's Rocky Allan or Ngaio's Roderick Alleyn better.  In either case, I feel sure you'll like the novel; I certainly did.  I'll be reviewing the second novel in the series soon, I hope.  It's already been ably reviewed by John Norris on his blog, but I'll have a few things to say about it too.
Posted by The Passing Tramp at 12:43 AM