"Nobody's mysteries ought to be as tiresome as you're making this one."

--author Owen Fitzstephan to the Continental Op in The Dain Curse

"When in doubt, have a man come through a door with a gun in his hand."

When really in doubt, make it a pineapple!

I originally reviewed Dashiell Hammett's The Dain Curse, quite negatively, over at the website Mystery*File back in 2011 (SPOILERS in the linked review).  Now, a decade a later (how time flies), I decided to take another look at Hammett's second novel, considered to be his weakest.  I found I disliked it just as much as I did the first time, if not more so. The odd part is, Hammett's debut novel Red Harvest, which he published just a few months earlier in the year 1929, is one of my favorite works in the genre.  How could one author write one book that is so good and the other so bad in the same year?  Now that is an unsolved mystery!  Time constraint, perhaps?

Where Red Harvest is tight, fleet and bracingly visceral, has genuine detection which is worthy of the name and, while incredibly violent, is as real and true a piece of twisted Americana as you likely ever will encounter in crime lit., The Dain Curse is...a farrago of utter nonsense, even by the rather generous standards of the Golden Age of detective fiction.

A contemporary rave of Red Harvest penned by children's author Walter R. Brooks (author of the Freddie the Pig books) highlights the qualities lacking in The Dain Curse:

Those who begin to weary of the similarity of modern detective novels, with their clumsily involved plots and their artificial situations and conversations, will find their interest revived by this realistic, straightforward story, for it is concerned solely with fast and furious action and it introduces a detective who achieves his purposes without recourse to higher mathematics [Take that, Philo!--TPT], necromancy, or fanciful reasoning.  It reads like the latest news from Chicago.*

*(Personally, I was reminded of Omaha, Nebraska, but, honestly, when it comes to American carnage, you take your pick. The choice of locales in my great country is legion.)

The Dain Curse, on the other hand, is a tedious muddle. in my view.  The plot, concerning a seeming "death curse" that hangs over the book's "heroine," young Gabrielle Leggett, that results in almost as many deaths as there are in Red Harvest, is ludicrous from start to finish (only getting more so as the pages go by) and handed out in great, unsatisfying lumps of exposition at the end of each of the three linked sections.  To quote a character in the book, the whole thing is just plain goofy.

Gabrielle herself is of little interest as an actual character as opposed to a plot device, despite her novel (at the time) drug addiction and physical unattractiveness.  There are no other interesting individuals among the plentitude of undeveloped characters, aside from the sleuth/narrator himself, the Continental Op--unless you count his windbag decadent novelist friend Owen Fitzstephan.  (I don't.)  Even the Op himself isn't nearly as pithy as he is in Red Harvest, or, indeed, the Op stories generally, saddled as he is with endless expository text and a ridiculous plot.

In panning the six-hour 1978 miniseries version of The Dain Curse (with an obviously miscast James Coburn as the 5'6", overweight and fortyish Op--where was Bob Hoskins?), Washington Post television critic Tom Shales complained that the "big, fat [film] opus" contrasted with the "clean, lean novel"; yet although the novel is only, I understand, 65,000 words, I find it reads much longer than that.

As I wrote in my original review of the novel, there are, to be sure, some good spots in The Dain Curse, as with the curate's egg, such as the opening, about a diamond burglary at the Leggett home, which treacherously promises readers a coherent detective novel.

I actually rather liked the relatively brief thrilleresque cult section and would have enjoyed seeing a whole novel fashioned out of this part.  (I was eerily reminded of modern grindhouse films.)  As I also wrote in my original review, I especially enjoyed this sardonic observation by the Op, which is so characteristic of him (and the author): "They brought their cult to California because everybody does, and they picked San Francisco because it held less competition than Los Angeles."  But by the third section I found myself passing quickly over the text; I was bored.  Even the grenade explosion didn't make me jump.  In my view when a detective story writer has to spend that much time explaining whodunit and why, he or she is in deep trouble.  This applies to modern day mystery writers as well.

Although some contemporary reviewers liked The Dain Curse better than Red Harvest, my impression is that the second book largely coasted off the success of the first one and the great press that Hammett was getting as the Pinkerton detective turned detective writer.  Even reviewers who deemed The Dain Curse desperately exciting, like Red Harvest, conceded that the plot in Hammett's new murder opus was preposterous.

Despite Walter Brooks' shot in his review above at S. S. Van Dine's bestselling baroque 1929 detective novel The Bishop Murder Case, one could hardly call it less "realistic" than The Dain Curse; and given that as a book reviewer Hammett liked to lecture everyone, including Van Dine, about realism in crime fiction, I have to ask, "Holy Toledo, Dash, what gives with The Dain Curse?!"  Practice what you preach, my good man.  Maybe the whole thing is meant as a send-up of lurid pulp fiction?

About the title of this review, yes, there is a pineapple in the book, but it sure ain't no fruit--it's the aforementioned grenade, a byproduct of the Great War.  My fruit of choice for this book, however, would be a big bunch of raspberries, if you catch my drift.  Though surprisingly the grenade slight of hand is probably the cleverest thing in the book. 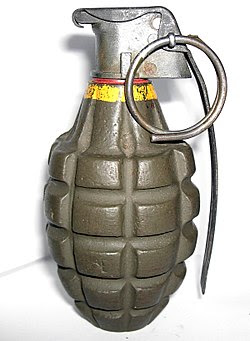 Posted by The Passing Tramp at 1:54 PM