Life's a Beach, Then You Die: The Barbarous Coast (1956), by Ross Macdonald

The Passing Tramp is still passing time in California--the California of hard-boiled fiction that is.  He's just been on the coast with Ross Macdonald, and he'll soon be hitching up to the mountains to see Bill Pronzini. 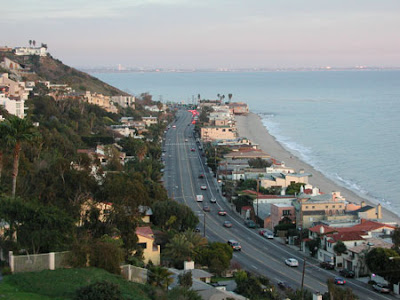 The cleverly titled The Barbarous Coast is the sixth Lew Archer detective novel by Ross Macdonald (Kenneth Millar) and the last, I believe, of his more Chandler-derivative tales.  Beginning, I would argue, with The Doomsters (1958) and certainly by The Galton Case (1959) Macdonald definitively established a voice independent of the Chandler-Hammett tradition. Since Kevin Burton Smith puts it so well at thrillingdetective.com, I will quote his words:

The Galton Case became a watershed, both personally and artistically, in Millar's life. Archer's (and Millar's) obsession with the twisted, secret history of families, and how the sins of the past shape the present, were finally nailed down, for all who cared to see. Although the early Archer's were well-written and tightly plotted, The Galton Case really got down to business. From that point on, it has been noted, Macdonald wrote the same story over and over, endless variations on the same themes of lost and abandoned children, absent parents, family secrets denied.

The Barbarous Coast is not quite in this mold, but it does seem to me transitional in some ways.  As explained in Tom Nolan's splendid biography of Macdonald, this period, the mid to late 1950s, brought difficulties to the lives of Macdonald, his wife (the equally distinguished crime novelist Margaret Millar) and their troubled daughter, Linda.  Though Macdonald actually completed The Barbarous Coast before 1956, when his daughter Linda was embroiled in a hit-and-run fatal accident case (a shattering event in Macdonald's life), Macdonald's interest in psychiatry--something that was to become a dominant element in his later books--already plays a pivotal role in Coast, as well be seen below. 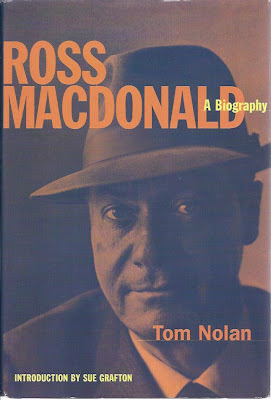 Coast is the third of the early group of six Archer detective novels that I have read and I think the most problematic (my favorite is The Ivory Grin).  Macdonald's uncertainly over Coast's title may suggest some uncertainty in its composition. His publisher, Knopf, rejected Macdonald's proposed title, The Dying Animal; we hardly can blame Knopf for this, although some of Knopf's proposed alternatives, it must be conceded, were simply horrendous:

Some people at Knopf seemed to be under the impression Ross Macdonald was Mickey Spillane!  In the end Macdonald had the brilliant inspiration of "The Barbarous Coast"; yet, unfortunately the novel is not, in my view, as successful as the final title.


Still, this is a Ross Macdonald novel I am discussing, so there is plenty of interest in it. Certainly Coast does not lack incident: we have a couple young nymphettes (one already murdered when the novel begins, one possibly about to be); a schizophrenic matron; a pretty boy boxer turned actor ("He's got prettier muscles than Brando"); a corrupt movie executive making the move into Las Vegas; a crooked cop; vicious mobsters (straight and gay); and some first rate beatings-up of our hero, Archer, in the best Chandler style (at one point Archer gets sapped three times in a few hours by my recollection and never has to seek medical assistance--the man gives extra meaning to the word hardheaded).

Unfortunately the plot is not one of Macdonald's most inspired and the portrayals of the film industry and of Las Vegas remain more quick, bright sketches than sustained, in-depth canvases.  The comparative dearth of true ratiocination is especially disappointing from my perspective.  Archer does do a bit of good deduction from the clue of a dropped earring, but mostly he wanders around getting people to spill their guts to them (sometimes this happens literally).  Much of the solution is handed to Archer near to end of the book, in the form of a long lecture from a psychiatrist (here we have wandered a long way from Casa Chandler and Hammett Hideaway).  Despite said lecture, I found the culprit for the many murders unconvincing.


At this point it must sound like I am not recommending this novel, but, hey, not so fast, buddy!  Besides colorful incident, there is the writing: like Chandler, Macdonald is always worth reading for that.  Major and even minor characters come alive in this tale (so that we want the latter to become major characters): the vain yet at her core realistic mother of one of the nymphettes; the aging, retired boxer turned security guard; the young African American lifeguard who came back from Korea determined to better himself through education (this utterly winning character makes one entire chapter and allows Macdonald some commentary on fifties racism); the homely, sourpuss Las Vegas hotel manager, and others.

This latter character, the hotel sourpuss, gives rise to something I have found a comparative rarity in the usually ever so serious and sober Macdonald: a really good Chandleresque jokey one-liner. When sourpuss thinks the attractive woman she has been asked by Archer to talk about may be in big trouble her face brightens:

"Are you after her for some crime?"
"Third-degree pulchritude."
She chewed on this like a camel, then shut the door in my face.

Archer tries to be cynical and tough-hearted, like the hard-boiled patron dick, the Continental Op.

"You leave a trail of destruction like Sherman marching through Georgia."

I braced myself for another life-story.  Something about my face, maybe a gullible look, invited them.

I put George in my bed.  My cleaning woman had been there that morning, and the sheets were fresh.  Hanging his torn clothes on a chair, I asked myself what I thought I was doing and why.  I looked across the hall at the door of the bedless bedroom where nobody slept any more.  An onion taste of grief rose at the back of my throat.  It seemed very important to me that George should get together with his wife and take her away from Los Angeles.  And live happily ever after.

The problem was to love people, try to serve them, without wanting anything from them.  I was a long way from solving that one.

Scattered throughout the novel are some beautiful examples of Macdonald's fine writing. Here are some I highlighted for this piece:

He reached for the string that controlled the light, and jerked the grief-stricken room downward into darkness.

Dancers were sliding around on the waxed tiles to the music of a decimated orchestra.

I felt his glance like an icicle parting my hair.

Self-pity stalked me, snuffing at my spoor.

That was the trouble with alcohol as a sedative.  It floated you off reality for a while, but it brought you back by a route that meandered though the ash-dumps of hell.

The brightness left his eyes like something quick and timid retreating into its hole.

Memory had given him a sudden stab.

The [swimming] pool was gray and restless like a coffined piece of the sea.

Such writing makes a Ross Macdonald crime novel always worth reading, even when the plot is not his most entrancing.  The Barbarous Coast is worth a stop and a dip.
Posted by The Passing Tramp at 12:31 AM