There's Death in Them Thar Hills: Nightshades (1984), by Bill Pronzini

Leaving the fictional southern California coast, I hitched up to the fictional northern California mountains.  Then I rode fictive rails to some much less hard-boiled, far more genteel locales in the northeastern Unites States: Pennsylvania, New Jersey, New York, New England.  Then it was across the Atlantic to old England (on a tramp steamer of course).  A lot to tell you the next couple of weeks about my travels in crime literature.--The Passing Tramp

Bill Pronzini's Nightshades takes us from The Barbarous Coast of Ross Macdonald to the mountains and lakes of northern California.  Pleasingly, Nightshades is a real detective story, with true detection and deductions--and not just on the part of Pronzini's Nameless Detective.


Nightshades dates from the 1980s, when Bill Pronzini was writing some very clever tales and expanding the emotional range of his Nameless Detective through, among other things, the character of Nameless' girlfriend, Kerry Wade.  In Nightshades, Kerry accompanies Nameless on his trip to Musket Creek (formerly Ragged-Ass Gulch), an isolated Gold Rush ghost town near the Shasta-Trinity National Recreation Area, 250 miles north of San Francisco and twenty miles from Weaverville, "the nearest town of any size."

Musket Creek, pop. 16, is being "threatened" by developers who want to turn the ghost town into a tourist attraction.  The individualistic locals differ from the commercially ambitious developers, vehemently objecting to any such encroachment from the business world. Recently some of the historic buildings in the hamlet have burned down in suspicious fires. When one of the developers dies in a house fire, Nameless is called in to investigate the death by the Great Western Insurance Company (there's a matter of a "double indemnity" policy).  If the man died from arson, the suspects certainly include the denizens of Musket Creek, but there also may be a number of other suspects as well.... In some ways Nameless differs from his great hard-boiled predecessors.  The first chapter of Nightshades is full of complaints from Nameless about secondhand smoke, his struggles with dieting and his fear of dangerous curves (on roads, not blondes).  It's hard to picture this litany being recited by the Op, Spade or Marlowe (of course who, based on films at least, would expect Marlowe to smoke a pipe or play chess?).  But then Nameless at this point has passed through the sensitive seventies, so we could hardly expect him to be other than he is ("Some tough guy I was," he comments ruefully at one point).

And the truth is, it all makes a nice contrast.  I enjoyed following Nameless' relationship with Kerry and was pleased to see her contribute as much as she did to the solution to the mystery.  Not for nothing are we informed at one point that Kerry is lying on the bed of their hotel room "reading a mystery novel by somebody named Muller" (a terrific inside joke).

Besides the mystery plotting and the byplay between Nameless and Kerry I quite enjoyed the smart-alecy, quite Chandleresqe narration by Nameless.  Some examples:

She let me look her over for about five seconds, while she did the same to me.  I was more impressed by what I saw than she was, but not by much.  Her expression was even more snooty than it had seemed in the photograph.

She went out of the room through a doorway beyond the fireplace, rolling her hips a little the way she had on the way in.  It wasn't an exaggerated roll, but I thought that it was deliberate.  Whatever her reasons, Helen O'Daniel was about as subtle as an elephant's hind end.

He was annoying me again.  I still hadn't managed to work up an active dislike for him, but I was getting closer to it.  It wouldn't be long now.

But Nameless' hard-boiled routine ("Philip Marlowe, circa 1940") doesn't always pan out, as during his interrogation of the denizens of a...beauty shop:

I put on a little more tough-guy for them, in the form of a glower, and it would have worked out fine if the damned salon smell hadn't been so strong in there.  I sneezed in the middle of a glower, none too quietly, and scared hell out of them and me both.

You'll be glad to know that Nameless makes it out of the beauty shop alive.  What happens to him, though, in rustic, roiling Ragged-Ass Gulch?  Read Nightshades and find out.  I enjoyed my stay and I think you will too. 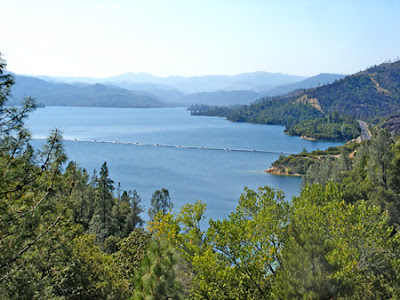 Posted by The Passing Tramp at 1:02 AM