The first time he died, Charlie Baxter was genuinely touched by the signs of his popularity....

Reading The First Time He Died, the superb fifth crime novel of Golden Age British suspense writer Ethel Lina White, I was struck--not for the first time--about how oddly underappreciated Ethel Lina White is.  One of her novels, the once highly lauded The Wheel Spins (1936), was made into an Alfred Hitchcock film, The Lady Vanishes, customarily deemed the best of his British pictures.  Another White novel, Some Must Watch, was filmed in the 1940s by Robert Siodmak as The Spiral Staircase, a classic old dark house thriller and the movie most often assumed to be Hitchcock film but in fact isn't.

In addition to her good film fortune, Ethel Lina White wrote fine suspense novels that stand on their own merit and also are a (surprisingly neglected) link between the Gothic and sensation novels of the eighteenth and nineteenth centuries and modern psychological crime novels.

I hope to illustrate this point in this installment of Then and Now by comparing The First Time He Died with Going Wrong, a novel by the great modern Crime Queen Ruth Rendell.


The rarest of Ethel Lina White's crime novels, The First Time He Died is also one of the author's four or five finest.  Briefly, the novels tells of the scheme of three individuals--Charlie Baxter, his wife, Vera, and the couple's friend, Puggie Williams--to commit insurance fraud by faking Charlie's death.  Grave complications naturally ensue.


This suspense novel indeed is superbly suspenseful ("Miss White works up her macabre passages with consummate skill," declared one reviewer), but it also exhibits literary styling above the genre norm at the time.  The three main characters all are memorable, but so, even, are minor characters.  An anonymous  schoolgirl who develops an instant crush on Charlie when he performs a chivalrous act for her is, for example, expertly limned in the few pages of the book she occupies:

The girl went home feeling that every cell in her body had been subjected to a chemical change.  For the first time she experienced the chaotic upheaval of Nature.  Hitherto, she had been a boy, and would have been murderous to a Constant Nymph* on the hockey field.*

Particularly interesting is White's depiction of how the characters in the novel are affected by their class sensitivities.  Charlie, who comes of intensely respectable middle-class stock, scandalized his family be taking a follies girl as his wife (White makes it absolutely clear that Vera's livelihood consisted of removing her clothes in public).  Both Charlie and Vera in spite of themselves are rather in awe of their friend Puggie, a bibulous sponger who tantalizingly may have been an Eton and Oxford man at one time:

It was evident...that he had begun life in a different social sphere from that of his friends, and had probably met them when he was sliding down the ladder and they were climbing up, so had clung to their necks, as ballast.

Charlie's sense of class inferiority comes into central play in the novel, when he becomes enamored with Jennifer Burns, a budding crime writer of superior social position.  Incidentally, Jennifer is no mere scribbler of puzzles, oh no!  She'll have you know that she has loftier pretensions than "mere puzzles":

"I came here to collect material for a book....You know, atmosphere and types.  I must get realism."

"Crime.  Of course, I shall concentrate on the psychological aspect--the mind of the criminal."

Since the reader by this time has long come to suspect that the mind of Charlie has pronounced sociopathic tendencies, the situation becomes quite interesting.... 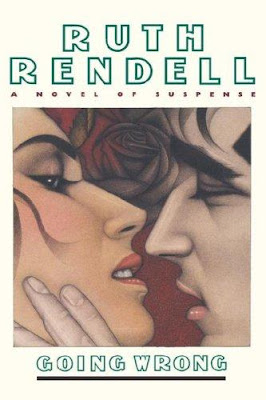 How similar all this is to Ruth Rendell's psychological tales of troubled urban loners, drifters and outright psychos, particularly her novel Going Wrong. This 1990 tale details the obsessive passion of street criminal made good Guy Curran for his childhood love (and social "superior"), Leonora Chisolm.  If it sounds a bit like Jay Gatsby in The Great Gatsby--albeit with the lyrical beauty and romanticism removed (there is little "gorgeous" about Guy Curran)--Rendell herself would agree, as she even references F. Scott Fitzgerald's great novel in her own book.


Guy's problems seem to stem from his inability to appreciate that the class barrier evidently is a nearly insuperable obstacle to cross even in Britain in 1989.  He is repeatedly belittled by Leonora's friends and family for his poor taste and his retrograde values (among other things, he thinks women should dress attractively, he likes Andrew Lloyd Weber musicals and he consumes meat).

At one point Leonora's mother, Tessa, lays it on the line to Guy: "To be perfectly frank, no matter how much money you've made, you don't belong in our class."  Granted, as Tessa goes on to add, Guy's criminal past and obsessiveness would be problematic under any circumstance.  Still, the charm of Leonora's smug family and friends quite escapes me! 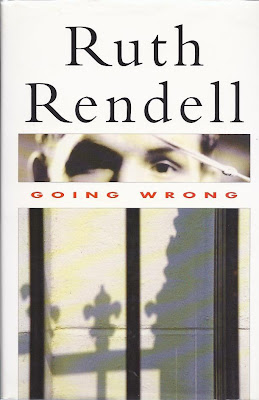 With their shared themes of criminality motivated by class sensitivities and obsessive passion, The First Time He Died and Going Wrong have considerable similarity (it could be said that the Rendell novel, over twenty years old, itself is now somewhat out-of-date in this respect).  I would say, however, that as s a suspense novel The First Time He Died is clearly the superior of the two.

To be sure, Rendell has produced numerous genre masterpieces in the suspense field, such as A Demon in My View (1976), A Judgement in Stone (1977), The Lake of Darkness (1980), The Killing Doll (1984) and The Bridesmaid (1989) (to say nothing of her Barbara Vine titles), but I would not classify Going Wrong among these books.

Suspense is suspended and the great reveal is what the English call a damp squib.  There is a cruel twist that reminded me of the ironically-titled Julian Symons novel The Man Whose Dreams Came True (1968), but to me it felt perfunctory.  Finding the characters rather uninteresting and unlikable--excepting Guy's amazingly steadfast, second-best girlfriend--I didn't much care what happened to them.


So, score one here for Ethel Lina White.  Let's hope an enterprising publisher reprints The First Time He Died.  It is, I would say, a suspense classic. Now I think I may go reread A Demon in My View or The Lake of Darkness....