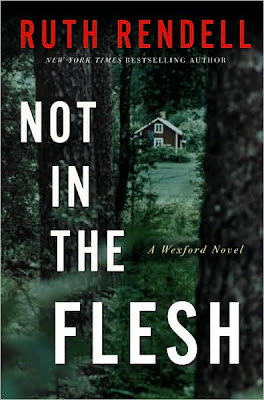 Ruth Rendell's Not in the Flesh is a novel preoccupied with the earth.  Jim Belbury, his truffle-hunting dog, Honey, and the transitory pickers of the apples, pears and strawberries grown on the fruit farms, all these beings derive sustenance from the land (Jim and the transient fruit-pickers earn cash, Honey chunks of sirloin as rewards for unearthed truffles).  But the earth can yield dead as well as living things, ugly things that people want to stay buried and lost forever. 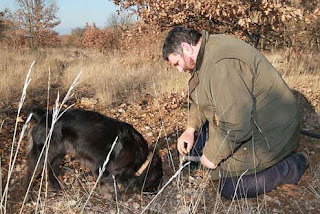 Sometimes our dead secrets don't stay buried. In the first few pages of Not in the Flesh, the intrepid Honey unearths not merely several truffles, but "the bones of a human hand, flesh, skin, veins, tendons all gone."  Jim Belbury knows what to do:

Jim might be an old countryman, once an agricultural laborer and living in a cottage with no bathroom and no main drainage, but still he would no more have gone without his mobile than would his fifteen-year-old great nephew.  Unaware of the number of Kingsmarkham police station, he dialled 999.

This passage nicely catches a recurrent theme in Rendell's fine 2007 Chief Inspector Wexford novel: the inter-meshing of past and present in rural England. Judging from internet commentary, some readers have found Not in the Flesh digressive and dull.  But I quite enjoyed the "digressions." With this novel Rendell has given us a fine traditional English rural mystery tale, with plenty of her characteristically keen and penetrating social observation.

Admittedly, the formal mystery puzzle in Not in the Flesh is far from Rendell's cleverest (at her best, Rendell is capable of Agatha Christie level sleight-of-hand).  The reader likely will tumble to the truth of who left the body in the trench some time before Wexford (though another body crops up to complicate things), but the getting there makes an enjoyable journey, thanks to Rendell's characteristic skill in conveying setting and character.


Outside of the Kingsmarkham police force, which, longtime detective duo Reg Wexford and Mike Burden excepted, is young and racially and sexually diverse, much of the cast of characters in the main plot line of Not in the Flesh is superannuated indeed.  Many seem to spend most of their time ensconced at home by their tellies, complaining about the state of things in modern England.  Wexford, who can be rather grumbly himself about modernity (his dislike of computers, grammatical innovations like informal personal address, "political correctness" and the metric system--all of which I suspect he shares with his creator--is intense), pointedly notes that Flagford, the village where these people live and where the bones were discovered, "is locally known as 'the geriatric ward'."  How accurate this appellation is!

Oliver and Audrey Hunter, for example, are 96 and 93, and living with a resident carer.  The thoughts Rendell expresses through a police sergeant character sent to interview them (futilely) are not exactly cozy:

Barry thought of modern medicine and healthier lifestyles keeping everyone alive much longer so that by the time he reached retirement age there wouldn't be thousands, but tens, hundreds, of thousands of people like the Hunters.  Alive but not living, ancient and disabled by time, deprived by the years of memory, hearing, sight and most movement but still alive.  He, too, maybe one day.  The carer, when she told him he needn't look like that, must have referred to his expression of pity mixed with horror.

Then there's the embittered and lonely octogenarian widow Irene McNeil, who had to give up Flagford Hall after her husband died.  "It was my husband's family home," she complains.  "You could call it his ancestral home.  His family had lived there for generations.  The house is perfect Queen Anne, you know, and the gardens are gorgeous--or they were, I don't suppose they are now."

Admittedly, Irene McNiel is hard to sympathize with, as she uses the term "village idiot" to refer to a mentally impaired man and is incredulous when she sees that the policeman sent to interview her is black.  Yet I found her story arc rather interesting (she gets a new lease on life when she gets a new carer, a sprightly and astonishingly giving gay man named Greg).

Then there's the Grimbles, John and Kathleen, who belong "to that category of people who, after about forty, decide consciously or unconsciously to become old." Rendell expounds interestingly on this theme:

While the cult of youth prevails in society, while to be young is to be beautiful, bright and lovable, they [the people like the Grimbles] sink rapidly into middle age and even seem to cultivate the disabilities of the aged.  Wexford's theory was that they do this out of laziness and because of the benefits incident to being elderly.  The old are not expected to take exercise, lift heavy weights or do much for themselves.  They are pitied but they are also ignored.  No one asks them to do anything or, come to that, to stop doing anything they choose to do.

Grimble complains incessantly about the government's denial to him of permission to build bungalows on his land, to his wife's reflexive, tired strain of "Oh, John."

And there's the famous novelist Owen Tredown, dying from cancer, and his two wives (actually the one woman is his ex-wife), Maeve and Claudia Ricardo.  This menage lives in a garishly decorated Victorian villa and tries rather desperately to be Bohemian and shocking ("the wives" in particular seem like they never mentally left the 1960s). 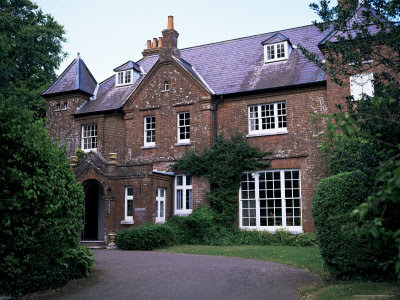 I enjoyed following these characters and others, deftly handled as they are by Rendell.

I also enjoyed following Rendell's chronicle of rural social change and continuity.  Not in the Flesh appeared a half-century after John Rhode's rural detective novel Licensed for Murder (1958), but the agrarian worlds portrayed by the authors are not so different as one might think at first blush.  Rendell's elderly characters really seemed as if they once might have lived in the pages of Rhode's novel, fifty years earlier (it doesn't hurt in this respect that Rendell's village is called Flagford and Rhode's Famford). 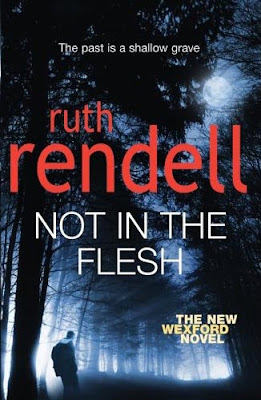 Still, there is definite social change.  The fruit-pickers now are Romanians and Bulgarians, the police force is racially and sexually diverse (ultra-feminist detective sergeant Hannah Goldsmith comes in for endless zinging from the author for her zealous, politically correct attitudes) and then there's the matter of the local Somali population. In dealing with this latter group, Rendell introduces a subplot about female genital mutilation that in itself is quite interesting (and certainly topical), though it remains disconnected from the main murder plot.

Despite these changes, however, I was left with a strong impression, after finishing Not in the Flesh, of continuity.

Despite generations passing away and new ones, admittedly differently comprised ones, replacing them, despite changes in technology and sexual and social mores, the land itself endures and to a considerable extent people seem to conform themselves to it.  Though written a half-century apart from each other Licensed for Murder and Not in the Flesh portray what still in many ways are discernibly similar rural Englands.  What will things be like in another fifty years?


Note: for part one of this piece see http://thepassingtramp.blogspot.com/2012/03/land-endureth-john-rhodes-licensed-for.html--The Passing Tramp
Posted by The Passing Tramp at 11:37 PM