First, let me mention that as I type this I've just passed 20,000 views, having entered into my fifth month of blogging.  It's nice to know some people are finding this a place worth stopping by for a time.  I will try to keep it interesting! 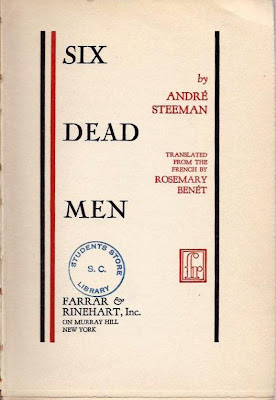 Like Georges Simenon, Stanislas-André Steeman (1908-1972) is another Franco-Belgian writer of mysteries; yet Simenon is much better known, certainly in the English-speaking world.  The most detailed information I could find on the subject of Steeman comes from this fascinating entry in Xavier Lechard's blog, At the Villa Rose, Lost in Translation: Stanislas Andre-Steeeman.

Lechard calls Steeman "arguably one of the greatest mystery writers of all time."  He notes that, in contrast with Simenon, Steeman was fascinated with the detective fiction genre and its conventions, or rules, treating them respectfully in many orthodox works.

Despite the fact that one can find more orthodox Simenon mysteries in some of the Inspector Maigret series, there is no getting away from the fact that on the whole Simenon was one of the major influences in shifting the mystery genre away from formal puzzle plotting toward an emphasis on such things as milieu, character, psychology, etc., that one associates, traditionally at least, with the mainstream novel.  And for many readers Simenon's name is synonymous with French crime genre writing in the twentieth century. 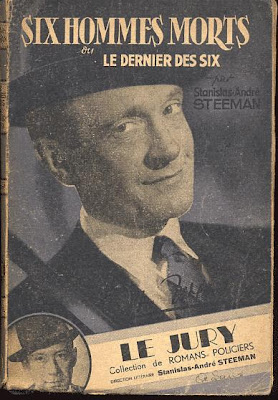 So when presented with the prospect of French language mystery author who emphasized classical detection I had to go a-digging for this gold! Unfortunately merely two of his books were ever translated into English and only one of those two seems at all locatable: Six Dead Men/Six Hommes Morts (1930/31--I have seen both years given for its original publication date).  So I had to make do with this one title, a pleasure and a frustration, because while it's a very good book, it makes one wish for more, which simply isn't there, at least not currently.

So, what is the nitty and the gritty, as an instructor of mine used to say, of Six Dead Men?

First of all, the novel bears a striking resemblance in conception to The Sweepstake Murders, by J. J. Connnington, which was published in 1931.  In Connington's mystery--one of his best--nine individuals form a sweepstakes syndicate, so that if any one of their tickets wins they all will share the winnings equally among themselves.  One of their tickets does win, but there is a legal delay in the awarding of the money.  When one of the syndicate members accidentally dies, the survivors formally agree that only living members of the syndicate will share in the winnings, when they eventually are awarded.  Bad idea! Suddenly other members of the syndicate start to expire--this time from someone's deliberate design.


Well, now, what mystery fancier wouldn't fancy such a plot as this?  Steeman's plot in Six Dead Men is quite similar  to that in The Sweepstake Murders (before writing his own did Connington, who was fluent in French and regularly read French novels, read Steeman's book, assuming it originally appeared in 1930?).

This time the tale concerns not nine, but, yes, six men, who agree to set out in the world for five years, make their fortunes, return and share those fortunes among themselves.  Well, when the novel opens they have started returning, five with fortunes (an impressive bunch!). And, perhaps not coincidentally, they also have started dying.  One man falls overboard from an ocean liner (or was he pushed?), another is shot, another stabbed.  The police seem helpless is stopping this campaign of slaughter.  Can anyone stop it?

One is immediately struck by Steeman's adherence to the classical form in Six Dead Men.  Many Simenon tales from the period, such as, say, The Strange Case of Peter the Lett (Pieter-le-Letton) and The Crossroad Murders (La Nuit du carrefour), feel more like Edgar Wallace thrillers then true detective novels.

In the early 1930s both Simenon and Steeman were dubbed "the French Edgar Wallace," an appellation that seems more suited, both in terms of output and subject matter, to the Simenon novels of this period (the early 1930s) than to the Steemans, judging from what Xavier Lechard has written about Steeman.  Six Dead Men indisputably is a true detective novel.

The ploys of deception in Six Dead Men are truly classical. While they may not fool the experienced reader of Golden Age detective fiction, who likely will have seen variations of the ploys in Sayers or Christie or Crofts, for example, they are delightfully and ingeniously handled by Steeman.  I particularly liked the deductions made about one of the murders, which takes place in an apartment lift (Ngaio Marsh later used this locus with great effect in one of her novels, Surfeit of Lampreys).  And, yes, there's even a floor plan!

There is also a bit of love interest, in the form of the novel's only significant female character, the lovely Spanish woman Carmen, fiancee to one of the six men. Two of the other men fall in love with her over the course of the tale, adding complication.  But is Carmen really what she seems?...

As befits a classical detective novel, the writing and characterization is sparely, but effectively, done. Carmen, the rivals for her love, an investigating magistrate and Steeman's series detective, Wenceslas Vorobeitchik (understandably he goes by "Wens"), all are efficiently and economically characterized.  Suspense is artfully maintained (I was quite on edge during the novel's penultimate climax).  This would be a great novel to read alone in a 1930s apartment building at midnight on a stormy night.  Creaky lift an extra!

Six Dead Men was reprinted in the United States in 1932 as part of the French crime wave that hit Anglo-American shores at that time.  Simenon was at the crest of this wave and today is by far its best-known component.  But on the strength of my reading Six Dead Men, I would conclude that Stansislas-André Steeman deserves to be much better known today than he is.

Note: The American edition of Six Dead Men was published by Farrar & Rinehart in 1932, in an attractive edition with what seems to be a good translation by Rosemary Carr Benet (1898-1962). She was the wife of Stephen Vincent Benet, renowned author of the Pulitzer prize winning narrative poem John Brown's Body (1928) and the much-anthologized short story "The Devil and Daniel Webster" (1937).  On the couple, see Patricia McAndrew, "Stephen and Rosemary: A Love Story," in David Garrett Izzo and Lincoln Konkle, eds., Stephen Vincent Benet: Essays  on His Life and Work (McFarland, 2002). Stephen's brother, William Rose Benet, wrote an early Agatha Christie review raving The Murder of Roger Ackroyd.  The Benets, it seems, had good taste in detective fiction!

Next stop: the Rhineland, with your pleasant guide, John Dickson Carr.  He wants to show us a castle where certain unpleasant events have occurred of late.  Come along now, don't hesitate....
Posted by The Passing Tramp at 11:11 PM