Murder, madness, misalliance, misidentity, missing persons--all these things are the stuff of the classic three-decker Victorian sensation novel so popular in the latter part of the nineteenth century (and currently enjoying a significant revival among fiction readers).

The best of Ruth Rendell's thirteen Barbara Vine novels (a fourteenth will be added this year) in my view all have the richness and depth of works by such great masters of Victorian sensation as Wilkie Collins and Mary Elizabeth Braddon.  And the sixth Barbara Vine novel, the 437-page Asta's Book (1993) (Anna's Book in the United States*), surely is one of the very best Vines--indeed, it is positively sensational! Asta's Book succeeds both as a fascinating, teasing mystery and a sophisticated, immensely moving character study. 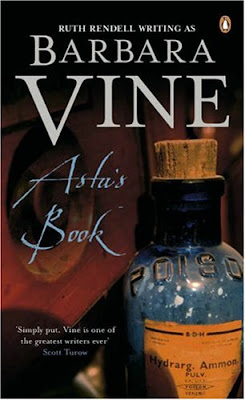 Using the device of entries from a set of diaries in modern times turned into bestselling books by the diary writer's daughter, Rendell creates a wonderfully rich and complex mystery in Asta's Book.

The novel opens with entries from the 1905 diary of Asta Westerby, a young Danish wife and recent migrant to England ("When I went out this morning a woman asked me if there were polar bears in the streets of Copenhagen").  Asta has become disenchanted with her business-preoccupied, frequently absent husband, Rasmus, who she has come to believe married her mostly for her dowry ("I suppose I should be thankful Rasmus isn't a Mahometan, otherwise I'm sure he'd be finding another wife...to marry for 5,000 kroner").

Moreover, she is rather indifferent to her two young sons and contemptuous of her illiterate maideservant, Hansine.  Feeling alone and anxious (she is pregnant yet again, this time, she desperately hopes, with a daughter) Asta finds in her diary some solace--and also an outlet for creative art. 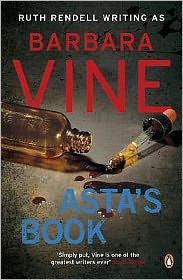 In Asta's Book Ruth Rendell combines Asta's story with the modern-day tale of her granddaughter, Ann, who now has charge of the ongoing publication of the diaries, which are worldwide bestsellers.

Ann functions in the novel as a sort of literary investigator attempting to untangle the web of mysteries enmeshing her family over the decades (appropriately she is a professional researcher), although there is a strand of subplot involving her television producer friend Cary that lends a delicious bit of ironic humor to the book.

The third key character is Asta's daughter (the one born back in 1905) and Ann's aunt, Swanhild (Swanny), of great interest in her own right.

In addition to Asta's diary entries and Ann's narrative, there is also an additional section of the book dealing with a famous murder trial.  More about this cannot be said, for so much of the great pleasure of Asta's Book is the page-turning thrill of simply having to find out just what happens (or happened) next.  One has to be careful not to say too much.  Such is the skillful construction of this novel that it functions brilliantly both as a work of suspense and a fair play mystery (the succession of revelations at the end all are genuinely clued).

Like A Dark-Adapted Eye, the Vine that is my second favorite, there is much of interest in Asta's Book about gender and class relations in other times (in Eye, especially during the 1950s; in Book, during the Edwardian era).

Asta's observations about domestic life can be bleak: "Hope is a horrible thing.  I don't know why these church people call it a virtue, it is horrible because it's so often disappointed."  Asta's Book may be a domestic novel, but it is certainly not cozy.

Readers who like the sharp tang of reality in their mysteries get that, as well as a cunningly constructed series of puzzles, in Asta's Book.

*The reason the title was changed in the United States from Asta's Book to Anna's Book is that Vine's American publisher was concerned the name "Asta" would remind readers of the dog from the Thin Man films!  Did most Vine readers really recall these films in 1993 (let alone today)?

Let us hope a newer edition--of which there certainly should be--will restore the original title (speaking for myself I am over forty and a classic mystery book and film fan and I never once thought of that dog when reading Rendell's masterpiece).

The next installment of The Passing Tramp will explore a genuine Victorian sensation novel, Benjamin Farjeon's Great Porter Square.

Posted by The Passing Tramp at 7:13 PM