Edith Wharton's significant contribution to supernatural fiction is well-known (see her short story collection Ghosts, 1937), but it seems that her story "A Bottle of Perrier"--originally published in the Saturday Evening Post in 1926 under the title "A Bottle of Evian" and reprinted in Wharton's short collection Certain People (1930)--is less heralded as the great crime/mystery genre tale that it is.  It is always a pleasure for me to go back and read this story, for in artistic merit as a genre tale it is comparable, I think, to such inspired short stories as Lord Dunsany's "The Two Bottles of Relish" (1932) (what is it about bottles?), John Collier's "The Touch of Nutmeg Makes It" (1941) and Stanley Ellin's "The Specialty of the House" (1948).  It also harks back to such sinister Edgar Allan Poe tales as "The Black Cat," "The Tell-Tale Heart" and "The Cask of Amontillado" (bottles again!).


Edith Wharton evidently did not think much of detective fiction (in her 1913 novel The Custom of the Country she uses the fact that a family has The Hound of the Baskervilles displayed to suggest the family's comparative illiteracy), yet she gave mystery and murder fans a corker of a story in "A Bottle of Perrier."

When the story opens "young Medford, of the American School of Archeaology at Athens" has gone to visit "his queer English friend, Henry Almodham," who, himself a lay archaeologist with sufficient private means to indulge his eccentric whims, lives in a crumbling crusader's castle in the desert.  As Medford leans against "the roof parapet of the old building, half Christian fortress, half Arab palace," he looks out around him at the vast "mystery of the sands, all golden with promise, all livid with menace, as the sun alternately touched or abandoned them."

Medford is informed by Almodham's servant, Gosling, speaker of "a sort of palimpsest Cockney lined with Mediterranean tongues and desert dialects," that Almodham was suddenly called away by a friendly Arab chief to explore some ruins to the south, but will be back shortly; meanwhile, Medford is to make himself at home. 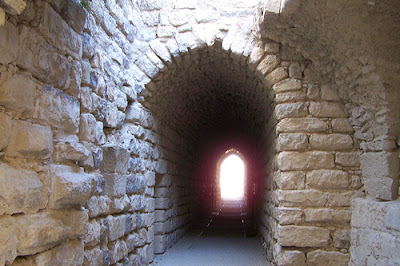 At Medford's first meal at the castle Gosford offers him wine, which Medford, still recovering from a bout with fever, has been forbidden.

"Just a mineral water, then, sir?"
"Oh yes--anything."
"Shall we say a bottle of Perrier?"
"Perrier in the desert!  Medford smiled assentingly....

I've just taken you through the first three pages of the story; there are eighteen pages of beautifully-written, steadily-mounting tension to go. 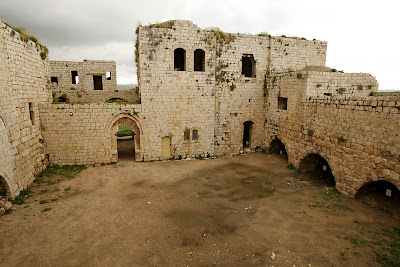 Medford found sleep unrecoverable. He leaned in his window and watched the stars fade and the dawn break in all its holiness.  As the stir of life rose among the ancient walls he marveled at the contrast between that fountain of purity welling up into the heavens and the evil secrets clinging bat-like to the nest of masonry below.

What happens over those days at the crumbling crusaders castle that looms up, in majestic isolation, out of the desert? If you're like I am, you will have to keep reading, because you will simply have to know.

Happily, "A Bottle of Perrier" is available on the net and also was reprinted by Scribner's in 1991 in The Selected Short Stories of Edith Wharton, which also includes some of the author's best ghost stories: "The Lady's Maid's Bell"; "The Eyes"; "Kerfol"; "Mr. Jones"; "Pomegranate Seed" and "All Souls'."  It also appears in the 2002 collection The Ghost Feeler: Tales of Terror and the Supernatural (though it is not a supernatural story), along with an introduction by Peter Haining.  See this review at darkecho.