In his interesting and influential but in my view often rather biased and one-sided analysis of classical English detective novels and thrillers, Snobbery with Violence: English Crime Stories and Their Audience (1971), Colin Watson portrays the Golden Age English mystery as quite straight-laced, sexually speaking, with blushing crime fiction writers of the day able to bring themselves to refer only “obliquely” to “coital encounters.” 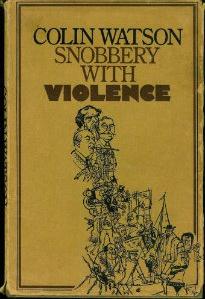 "The political tone [of the between-the-wars English mystery novel] was conservative save in a handful of instances,” pronounces Watson.  He expounds:

As for morals, it would be difficult to point to any other single branch of popular entertainment that conformed more strictly to current notions of decency. [...] An almost Victorian reticence continued to be observed in crime fiction for decades after treatment of unsavory topics had come to be accepted, within limits, as a legitimate feature of the straight novel.

Admittedly, the novel is set in France (specifically Paris), where, as I mentioned in the other's day's Virgil Markham piece, many Anglo-American readers no doubt could more easily accept the presence of moral decadence in human life. Still, the plot itself quite strikingly involves elements (drugs, homosexuality, prostitution and sexual voyeurism) that would be right at home in the unbuttoned and unzipped modern mystery. 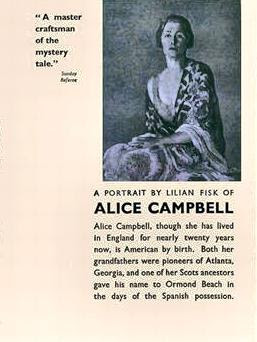 Alice Ormond Campbell (1887-?) herself was an American, though, like John Dickson Carr, she is associated with the English school of mystery. Originally she came from Atlanta, Georgia, where she was part of the socially prominent Ormond family.

Alice Ormond moved to New York City at the age of nineteen and quickly became a socialist and women’s suffragist (this according the blurb on a 1939 Penguin paperback edition of one of her books — evidently Penguin did not deem it necessary to shield potential readers from knowledge of this author’s less than conservative background).

The adventurous Ormond moved to Paris some time around 1910 ("Paris was where the twentieth century was," memorably declared Gertrude Stein).  There she married the American-born artist and writer James Lawrence Campbell and had a son in 1914. After World War One, the family left France for England, where Campbell continued writing crime fiction until 1950 (the year The Corpse Had Red Hair appeared). 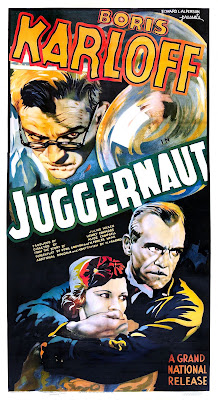 The first Alice Campbell mystery novel was Juggernaut, a highly-praised tale of the murderous machinations of a villainous doctor.  Some delighted critics compared it to works by Wilkie Collins, A. E. W. Mason and Marie Belloc Lowndes.  Additionally, Juggernaut was adapted into a film starring Boris Karloff in 1936--see left.)

Throughout the rest of the pre-WW2 period, most of her crime tales were set, like Juggernaut, in France.  Desire to Kill is one of the French novels. Like many Alice Campbell crime stories, it is more a tale of suspense, though there is notable detection in the form of attempts by a couple amateur investigators to pin the crime on the true villain (after World War Two Campbell was admitted to England's prestigious Detection Club). 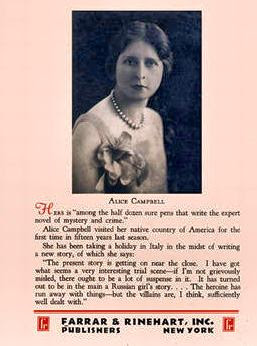 The Sunday Referee pronounced that Desire to Kill "denotes a master craftsman of the mystery genre," due to lifelike characters, brilliant dialogue and "unusually ingenious" plot; while Dorothy L. Sayers praised the novel “for the soundness of the charactersation and the lively vigor of the writing,” which helped lift the narrative out of “sheer melodrama.”

And melodramatic the tale is! The opening sequence, which concerns the events at socialite heiress Dorinda Quarles’ bohemian drug party, is well-conveyed. Sybaritic “Dodo” Quarles imbibes deeply and frequently at the well of moneyed decadence:

The girl was by all accounts coarse, flamboyant, untrammeled by scruples or breeding; indiscriminate in love, and with a capacity for drink which led her to the open boast that, like a certain gentleman of Half-Moon Street, she never breakfasted, but was sick at eleven….

Dodo’s latest wicked pash is the cult-like new religion of the Bannister Mowbray--obviously, in the eyes of the respectable, an utter charlatan and degenerate (Mowbray almost assuredly is modeled after the infamous occultist Aleister Crowley, 1875-1947):

Rumour had it he came of a good Highland family, his mother a Greek, and that in a remote past he had been sent down from his university for dubious practices. At all events he was known to have delved deep into mysteries the normal being eschewed, and to have founded a cult which, after being hounded from place to place, was now domiciled in Corsica. Just what went on in the circle of his initiates no outsider could definitely state, but credible report declared the man’s readiness to prey on the infatuated disciples who clung to him with a strange devotion.

Bannister Mowbray’s current “henchman and slave” is Ronald Cleeves, the handsome son and heir of Lord Conisbrooke. The author compares him, in a suggestive image, to a “pure Greek temple…invaded by a band of satyrs.”

About the nature of the relationship between this pair the author dares everything but shriek its name--surely even the most ingenuous 1930s reader got the idea!

Other characters in the novel — all guests as Dodo’s party — include:

Peter Hummock, originally of South Bend, Indiana. “Ranked as the most pestiferous social nuisance in Paris,” Hummock nominally deals in antiques and designs tea-gowns “for middle-western compatriots” but spends most of his time “in a tireless dash from one gay function to another, impervious to snubs, detailing scandal.”

“The glum and taciturn Australian poetess, Maud Daventry.” A neighbor of Tommy’s first mentioned in Campbell’s earlier Rostetter mystery, The Click of the Gate (1932), Tommy has “nothing against her, little alluring as she was her soggy complexion, mannish dinner-jacket, and untidy mop of hair invariably flecked with cigarette-ash."

Announcing that Dodo’s party guests have consumed a powerful hallucinogenic drug, Bannister Mowbray promises them the thrill of intense dreams:

They will tend toward wish-fulfillment, of course, but the character will vary with the individual. All I can predict is that if any one of you cherishes a desire ordinarily forbidden, he may…taste an illusory joy of accomplishment.

During the period when all the guests at Dodo’s party are ostensibly in drug-induced stupors, Dodo is brutally stabbed to death—a rather Manson-like culmination of events (the situation also resembles that found in Adam Hobhouse's The Hangover Murders, published the next year--though in that novel the particular sybaritic group stupor is alcohol induced).

Apparently someone indeed had cherished an ordinarily forbidden desire, a desire to kill; and its accomplishment in those dark hours was not at all illusory.

When a woman he believes innocent is implicated in Dodo’s murder, Tommy investigates to discover what truly happened at this decadent affair. He finds that the dead Dodo is not exactly missed:

“Who cares a hoot if she did stick a knife into the worthless bitch?”
“David!”
“Well, what was she, then? You tell me a nice name for her.”

Despite encountering indifference and resistance on almost all sides, Tommy perseveres in his investigation and eventually discovers an amazing answer to his problem. Proving it, however, becomes a perilous endeavor indeed for him.

Much of the later part of the novel involves goings-on at a house of prostitution where, for a price, the madam allows those voyeurs who like to look but not touch access to strategically placed peepholes, so that they may watch the house’s illicit couples coupling. The lingering look that Alice Campbell provides of sexual voyeurism strikes me as unusual fare for a book published by the respectable Collins Crime Club!

Though Campbell never directly describes sexual acts, reticent she is not in Desire to Kill.  In terms of subject matter the novel certainly offers something outside the beaten Golden Age track — and the mystery is not at all a fizzle either.  I found the tale superior to the immediately preceding Tommy Rostetter mystery, The Click of the Gate (a suspense thriller about a kidnapping, also set in France).

Desire to Kill is herewith recommended as an antidote to conventional wisdom about the detective fcition genre in its Golden Age and for its sheer entertainment value as an intriguing and exotic mystery.
Posted by The Passing Tramp at 1:55 AM