"[A]board this ship is a murderer who has the power to kill almost instantaneously without leaving  a mark, without inflicting a wound, without leaving a trace of his presence except the body of his victim." 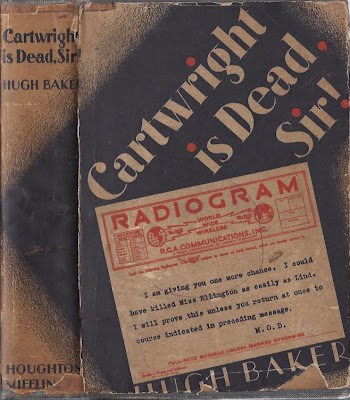 Quite a handy set of abilities in the hands of a mass murderer!  Will he (or she?) be stopped?...

Houghton, Mifflin, publisher of Cartwright is Dead, Sir!, assured prospective readers of the novel that so tension-filled were its pages they would never regain "peace of mind" until they had reached the very end.

I wouldn't go quite that far, but Cartwright is Dead, Sir! is a fast-paced, fairly clued (well, for the most part) tale that should keep a mystery fan entertained for several hours.

The novel deals with a fateful voyage of the fruit steamer Napoc from New Orleans to the Latin American Republic of Costa Blanca. Wireless messages have been received, from one M. O. D.,  demanding that the ship change course, or dire consequences will result.  These messages are ignored...and the deaths commence.  No traces are apparent of how the victims have come by their deaths. Could they have been slain by a "death ray," as M. O. D. claims?

And what is the motive behind this madness?  Could it have something to do with the machinations of rival American fruit companies in Costa Blancan politics?  And what does the vanished good luck piece have to do with it all?  And the man who can't abide the smell of oranges?

Aspects of this novel certainly remind me of John Dickson Carr (there's an obvious general resemblance to Carr's shipboard mystery, The Blind Barber, coincidentally also published in 1934; and the death ray business was like "teleforce" from The Reader Is Warned).  To be sure, Cartwright is not as good as John Dickson Carr's 1930s mysteries, but that is setting quite a high bar!  I enjoyed this one for the fast pace, the suspense, the solid plot and the look at American-Latin American commercial and political relations in the 1930s.

"Hugh Baker" is the pseudonym of Hermann B. Deutsch (1889-1970) and Donald Hugh Higgins.  About the latter man I know nothing, but Deutsch was a prominent Louisiana journalist in his day and authored additional works, both fiction and non-fiction.

Hugh Baker also published a mystery short story or novelette with a title redolent of Edgar Wallace thrillers: "The Whispering Terror" (Mystery Magazine, 1935).  Judging by Cartwright is Dead, Sir! this work would be worth a read.
Posted by The Passing Tramp at 12:48 AM