This forgotten book for Friday is certainly a book, I would say, but is it a novel?  The Crimefiles were a 1930s series of murder case dossiers comprised of all the purported documents and clues in the case (letters, reports, statements, photographs, actual physical exhibits, etc.). Different series were published in England and the United States.  "A new dimension of reality has been brought to the detective story," boasted the publisher of the American  Crimefiles series, William Morrow, sounding a bit like Rod Serling of The Twilight Zone. 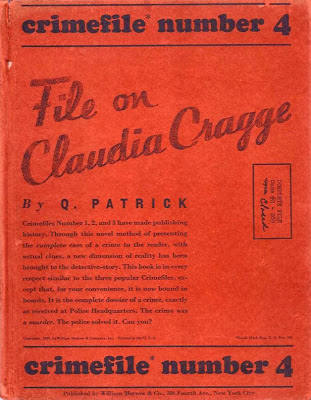 In his landmark genre study Bloody Murder, originally published four decades ago, critic Julian Symons--who, frankly, could at times be a bit of a killjoy when it came to Golden Age detective fiction--wrote dismissively of this "curious experiment" in mystery storytelling, terming the works produced in the series "artefacts rather than books."

Symons pronounced it "very nearly impossible actually to read them" because "there was in the nature of things no characterization of any kind, and interest rested solely in the comparison of the texts with the visible clues in an attempt to discover discrepancies."

Symons then expanded this criticism, declaring that "the orthodox detective puzzles of the time were only similarly bloodless and characterless games of a more sophisticated kind, after all."

I have to disagree with Julian Symons about Crimefiles, at least as far as Q. Patrick's The File on Claudia Cragge is concerned.  This book, dossier, call it what you will, I found to be rather fascinating and more gripping than one would ever suspect from Symons' negative comments on the series (Symons evidently thought so little of the series that in Bloody Murder he without warning spoils the solutions to two of the English dossiers).

Symons' view notwithstanding, I thought of the book as a sort of epistolary novel.  It's certainly easy to see how the plot could have been filled out to encompass a full-scale traditional novel.

Claudia Cragge, who is murdered soon after the book starts, is the wealthy widow of Eliot Cragge, late millionaire and faddist of all things faddish, including spiritualism.  Before his death Eliot Cragge told Claudia, to whom he was giving the right to apportion the Cragge Trust among familial heirs deemed  "morally, physically and legally" deserving of inheritance, that he had grave suspicions one of his heirs was not so deserving.

Seemingly Claudia discovered who this person is; thus Claudia Cragge had to die.

Claudia is actually slain in the dark during a spiritual seance, strangled with the cord of a trumpet, while Patrick's detective, Timothy Trant, introduced the previous year in Death and Dear Clara (referenced in the current book), is actually present.  He thus has extra incentive to solve this case!

Besides the various Cragge family members who might have been cut out of the Trust on Claudia's command, don't let us forget the Cragge family spiritualist, the Javanese Julie Van Maas, or Olaf Rasmussen, the handsome Swedish masseur turned chauffeur Claudia was supposed to be planning to marry.

For my part, I thought the characters came through rather well in the various statements provided (a clever idea also was to have the seance get recorded, providing a transcript of everything said).  Q. Patrick (at this time the writers Richard Wilson Webb and Hugh Callingham Wheeler) not only was an ingenious plotter, but he had a considerable knack for conveying character.

I was able to deduce the culprit as I would have in a traditional detective novel, thought I did not figure out how everything was done.

I missed the significance of someof the physical clues provided, and I very much enjoyed seeing how they fitted into Trant's solution.

Q. Patrick contributed another dossier to Crimefiles, The File on Fenton and Farr.  Based on my enjoyment of The File on Claudie Cragge, I definitely plan to read it.
Posted by The Passing Tramp at 4:19 PM