Apprentice of the Humdrum Mystery: Death in the Night Watches (1945), by George Bellairs

Like Elizabeth Ferrars and Christianna Brand, then, Blundell is not quite officially Golden Age--but he's close enough!  His early novels from the 1940s were published in the United States by Macmillan (they also published, among British mystery writers, E. R. Punshon and Christopher Bush) and he was well received there, getting some favorable notices from, for example, crime fiction reviewer Anthony Boucher.

After about a decade, however, Blundell's novels fell off in popularity in the States and, though he was a quite prolific writer of considerable longevity, he has faded from public memory in the three decades since his death.  However, many of his early books are extremely rare and highly sought by collectors.

To me Blundell is significant for carrying on something of an attentuated "Humdrum" tradition after the deaths of Freeman Wills Crofts and John Street.  His books offered straightforward police investigations of dastardly crimes and appealed to those desiring an honest-to-goodness, classical-style British detective novel in a time when such works were losing cachet.

The George Bellairs detective novel Death in the Night Watches is one of his most classical in milieu, involving murder in a wealthy wartime manufacturing family.  There's a tyrannical patriarch who married a much younger woman, a will deemed highly unsatisfactory by many of his heirs, a timetable, and even a butler!

If it weren't for some references to the war and to business conflicts with energized unions, one might think this novel twenty years older than it is.

The novel starts well, with Harold Worth, manager of the family foundry, Worth's, getting killed off in a dramatic fashion. Then the old nanny, who evidently knows too much, is dispatched through poison in her sugar bowl.  The aforementioned tyrannical family patriarch died before the novel begins, leaving his money in trust to his much younger widow.  She would seem to be the natural target for murder, not Harold, but it is Harold who is dead.

So who might have killed Harold?  Well, his young stepmother, perhaps, or Harold's feckless, arty brother, or Harold's sister, or maybe that no-good, fortune-hunting French count the sister married.  Then it seems that Harold was a bit of a lad with the ladies, so there are various fathers of attractive female employees at Worth's to suspect (including that hot-blooded Welshman Llewellyn Evans--Evans! Oops, I mean heavens! we know he has to be Welsh from that name, plus he helpfully peppers his conversation with "Look you's" just to make sure we don't miss it). 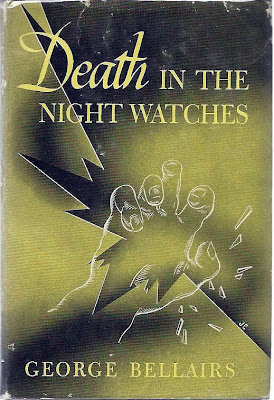 There are some good humorous character sketches in this novel, but unfortunately as a detective novel, Night Watches proves rather a bust in my estimation.  Investigation proceeds largely with Littlejohn going about questioning people continually.  There is not much material or scientific investigation, as there would be in a John Street novel, and there are no brilliant deductions.  Finally, after Littlejohn is told enough for him to alight on the killer, he breaks an alibi that has none of the ingenuity of those carefully constructed contrivances concocted by the Golden Age Alibi King, Freeman Wills Crofts.

So in essence Death in the Night Watches has the surface appeal of the classical British detective novel, without the substance.  The humorous character sketches aren't strong enough to salvage an unmemorable plot, in my view.  I've read better Bellairs, and will keep him on my list, but Night Watches is no rival to the best detective novels by the "Humdrum" masters.

Harold Blundell probably read Freeman Crofts and John Street (in Night Watches there's even a character named Waghorn, a name I've never seen outside of John Street's John Rhode novels, where copper Jimmy Waghorn is a major series character), but in Death in the Night Watches, Blundell's not an old master of the humdrum mystery but, rather, a young apprentice; and his work leaves room for improvement.
Posted by The Passing Tramp at 3:21 AM