The Paperback Evolution: The Better to Eat You (1954), by Charlotte Armstrong

My recent post on Charlotte Armstrong caused me to think about the interesting cultural evolution in American mystery paperback art.

For illustration let's look at one Charlotte Armstrong title, The Better to Eat You (1954).  Presumably this title comes from Little Red Riding Hood, specifically the exchange between Red and the Wolf, disguised of course as Grandma ("Grandma, what big teeth you have!" "All the better to eat you with!").

Here's the 1955 paperback edition (with the title changed to the rather less subtle Murder's Nest).

First note that remarkable price, one quarter!  I can just remember when paperbacks were 95 cents (nine pesos in Sanborns department store in Mexico City).

Anyway, note the role of the sexes on this cover.  Our heroine is comatose--a comely burden for our hero (I think he's the hero?), who in a concession to Armstrong's female readership, one guesses, is sporting a ripped shirt that exposes impressive musculature. Of course our heroine's physical allurements are not to be sneezed at either!

An exciting cover, to be sure, and one not far off from what you might find on a Micky Spillane novel, but not exactly capturing the more literary quality for which Charlotte Armstrong was aiming with her work.

Next we have the 1970 paperback edition, issued during the height of the Dark Shadows Gothic craze.

In these years seemingly every other paperback book by a female mystery author had a cover illustration of a lovely woman in a diaphanous nightdress dazedly wandering around the lawn of an old mansion sometime round about midnight.  What the heck is she doing, anyway? This is an improvement over 1955 in that our heroine now is able to walk, at least, but is she even awake or is she sleepwalking?

Whatever the answer, these covers seem to have been quite popular in the late 1960s-early 1970s.  Also note that Armstrong is termed "Mistress of Romantic Suspense."  Here Gothic seems crossed with a strong dose of Harlequin Romance, even though to categorize the marvelously original and inventive Armstrong as such is rather limiting.  And there's still a man lurking around too ( is he friend or foe? marvelous or murderous?)

Finally, we have the most recent paperback edition, from 1992. 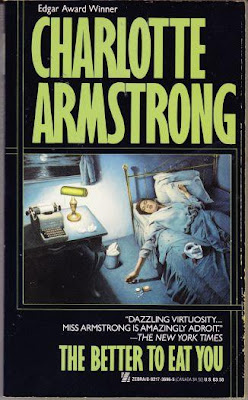 Which of the covers is the best?  What would a cover for the novel look like today?  Would the title be changed (this title today probably suggests to many a cannibalistic serial murderer)?  Maybe one day all the Charlotte Armstrong mysteries will be reprinted in paperback and we will see!

Coming next week: Reviews of Rufus King's maritime mystery The Lesser Antilles Case (1934) and two police procedurals separated by seventy years, Ian Rankin's The Impossible Dead (2011) and George Bellairs' The Dead Shall be Raised (1942).  Your peripatetic blogger, The Passing Tramp.
Posted by The Passing Tramp at 8:22 PM