The Protege (1970), by Charlotte Armstrong

Between 1942 and 1970 nearly thirty Charlotte Armstrong (1905-1969) novels were published.  Most of these are categorized as "tales of suspense."  I've taken a special interest in Armstrong's work ever since I found out that she lived in Glendale, California the same time as my grandmother, who was six years older than Armstrong and moved out there from Amarillo, Texas after my grandfather died.  I like to think that maybe they came across each other grocery shopping or something!

Charlotte Armstrong is of historical importance in the crime and mystery genre as one of the women writers--along with, for example, Margaret Milllar, Ursula Curtiss, Shelley Smith and Celia Fremlin--who moved away from the traditional tale of detection to the modern thriller, or psychological suspense novel, where the interest is in the why rather than the who or how, in what will happen rather than whodunit (Jeffrey Marks writes about some of these women authors, including Armstrong, in his Atomic Renaissance, while Rick Cypert has written a critical study of Armstrong, The Virtue of Suspense.)

After writing three detective novels between 1942 and 1945, Armstrong broke this mold with The Unsuspected (1946), a suspense tale much celebrated in its day, as was Mischief (1951), which followed five years later (both of these novels were quickly adapted into films).

Sometimes Armstrong seemed to strain so hard against genre boundaries that she burst them, producing what more properly can be seen, in my view, as so-called mainstream fiction. 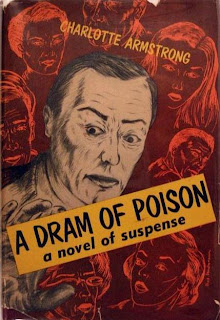 Her Edgar award winning novel A Dram of Poison (1956), about a bottle of poison that inadvertently gets left on a bus, can't really be called a crime novel as I see it (there is really no intended crime to speak of)--though it certainly is suspenseful (and it was marketed as "a novel of suspense").  Rather, I find it simply a marvelously humanistic tale about the foibles of men and women.

To me, Armstrong's keen insight into the follies of humankind--justly recognized in A Dram of Poison--is her most remarkable quality as a writer. This quality also is found in Armstrong's last novel, The Protege, which was posthumously published in 1970.

Armstrong's late 60s/early 70s paperback publisher, Fawcett, tried rather desperately to shoehorn The Protege into the traditional suspense novel formulation, writing breathlessly on the back cover:

Then both women watched with dawning horror as a bizarre scheme unfolded--a scheme to revive the past terror they thought they could forget....

Such purple prose notwithstanding, nothing in The Protege is lurid or even really that terrifying.  But the novel is still quite worthwhile.

There is suspense in The Protege, though readers will be clear about most of the back plot rather early on (there is one very nice twist, however--not original, but I'm pleased to admit I missed it coming). 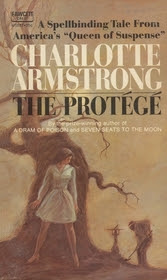 What really makes the novel stand out, in my view, is that the reader is quite drawn into the plights of the two main characters: the old California widow, Mrs. Moffatt; and the visiting young man, the son of her former next door neighbors he says, who comes to stay in Mrs. Moffatt's old gardener's cottage.

I finished Armstrong's (short) novel in one evening, not because of the horror and terror provoked by any bizarre scheme, but simply because I wanted to see how things would work out for these two compellingly presented people.  The Protege is a worthy addition to Charlotte Armstrong long line of superbly humanistic novels, call them whatever genre you will!

Note: Thirteen Charlotte Armstrong novels, including A Dram of Poison, are now available in eBook form from Mysterious Press.  See also Ed Gorman on Armstrong in 2007.
Posted by The Passing Tramp at 6:47 PM