My theory of television series (and I think I'm hardly alone in this) is that first seasons usually are somewhat tentative, then a plateau in quality is reached for several season, before decline sets in the last season or so.  Poirot doesn't exactly follow this trend, because even though it has the all-important common denominator of David Suchet in the title role throughout the series, it abruptly transformed itself in Season 9, jettisoning the Hastings-Japp-Miss Lemon ensemble and going for a much more sombre tone.  In a way, it's as if we have had two different series.  However I think what I shall dub Poirot I (Seasons 1-8) does rather follow the pattern I have described above.

Essentially Seasons 1-5 (1989-1993) are of a piece, with short story adaptations predominating. One novel adaptation was done in Seasons 2 and 3 and Season 4 consisted solely of three novel adaptations.  Season 5 went back short stories, but was the last such season (for some reason The Labors of Hercules, the best Poirot short story collection, was not adapted at this time--sure, these stories do not have Hastings, but one presumes the adapters would have found a way to shoehorn him into them).

Season 6 in 1995 consisted of four novel adaptations, only one of which was fully successful, in my opinion (Murder on the Links).  Seasons 7 and 8, which did not follow until 2000 and 2001 (why the lag?), had lost much of the earlier magic, ranging from outright dreadful adaptations of novels (The Murder of Roger Ackroyd and Murder in Mesopotamia) to merely mediocre ones (Lord Edgware Dies and Evil Under the Sun).

Since then we have had Seasons 9-12 (2003-2009).  This is the "Dark Poirot," eventually to wrap with one more season, culminating in Poirot's swan song, Curtain.  These have been controversial affairs, some rather brilliant, I think (Five Little Pigs, Sad Cypress), some travesties (Cards on the Table, Murder on the Orient Express). 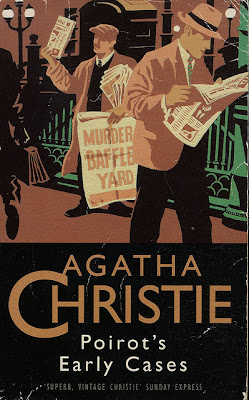 But, all this said, let's go back to Season 1, when it all began.  On the whole I rank Season 1 a bit lower than Seasons 2, 3, and 5 (the story adaptation seasons).  It seems to me that the budget was smaller and that sometimes episodes were filmed with somewhat less flair.  The series characters also don't seem to have quite gelled.  Japp is a bit of a dull dog in Season 1 (he hasn't yet figured out that Poirot is Always Right and is rather adversarial), while Miss Lemon usually doesn't have much to do.  Hastings is IT from the get-go, yet Poirot, on the other hand, is noticeably politer and less egocentric.  He seems a bit less outsize in personality.  Is this more or less faithful to the character, I wonder?

The Adventure of the Clapham Cook *****
The series gets of to a great start with this tale of the distraught suburban matron who has lost her domestic (good cooks are so hard to find!).  The matron, Ernestine Todd (Brigit Forsyth), is a wonderful satirical character, and Katy Murphy is splendid as the maid Annie (one of the best maids in this series, surely).  Then there's Danny Webb as the uppish railway clerk (from the way he back talks Hastings you just know this man's a Red!).  It was nice espying him as a young man, after seeing him in so many roles over the years, usually as someone unlikeable and really quite snarky (his latest such character appears as one of the young Morse's foils in the film Endeavor, reviewed here).

The mystery itself in pleasingly complex, amusing and dramatic in all the right places, and another excellent corrective to those under the impression that all Golden age English mystery tales place either in country houses or quaint villages.

Murder in the Mews***
Did Mrs. Allen commit suicide or was she murdered?  A clever plot, but rather dramatically inert, I thought.  Not as good as the actual longish short story.

The Adventure of Johnnie Waverley***
Poirot is hired to prevent the kidnapping of an obnoxious country squire's son.  This one has a decent plot and the manor house is suitably splendid (not art deco for once!). However, I think the motive of the culprit was altered somewhat in the adaptation.  It's not completely convincingly done either in the story or the adaptation, in my opinion.

Four and Twenty Blackbirds**
Not as bad as The Cornish Mystery or The Missing Will, but a definite meh episode.  No memorable characters and nothing especially clever about the crime.  Rather a pointless affair.

The Third Floor Flat****
Although the solution is revealed rather early, I like this one quite a bit.  It's a clever situation and instead of Poirot coming to murder, murder comes to him--the killing takes place in his own block of flats! There's also the amusing bit of Poirot going to see the murder mystery play and not enjoying it at all.  And the matter of Hastings' car!  I say!

Triangle at Rhodes*****
Great on location shooting here (much of the year's budget must have gone into this episode) and one of Christie's classic plot devices, variants of which she used many times.  Superb story, well-adapted.

Problem at Sea*****
Another great "tour" tale, with Poirot solving a yacht cabin murder, committed off Egypt.  The murder victim, Mrs. Clapperton, is superbly portrayed by Shelia Allen; she's one of the most memorable gorgons in the history of the series (checking imdb, I see she died just last year, at the age of 78; her last film role was as "Ministry Witch" in Harry Potter and the Goblet of Fire, 2005--she will be missed!).

Seasoned mystery fans should get the trick, but the dramatic content and the casting are so good that they should enjoy the episode greatly.  The unmasking of the culprit is a tour de force and the final scene, with Poirot's great line "I do not approve of murder!", is memorably done.

The Incredible Theft***
Country house espionage tale involving theft of super secret airplane plans or something like that.  Not bad, but not memorable.  The best part is Hastings complaining how he has to share a bed at the local inn with Japp.

The King of Clubs***
This one concerns the film actress on the scene at the murder of her film producer.  The film stuff is fun, but the murder is at the producer's house and involves a lot of time spent by Poirot at a rather drab next-door suburban villa. Some notable improbabilities, but not bad.  Best part: A passing tramp is suspected of the dark deed!  Perish the thought!

The Dream*****
A great finish for the season.  Murder of a classic evil factory owner (pork pies), in a locked room situation, rare for Christie.  Excellent use is made of the factory setting (it's glorious deco, though the factory owner himself seems a holdover from Victorian days), the supporting cast is uniformly good (note lovely Joely Richardson, daughter of Vanessa Redgrave), there's a good Miss Lemon subplot and Hastings actually gets to do something useful.  Only slightly marred by no explanation being given of how Poirot arrived at a certain point.

So, although there are some mediocre episodes, Season 1 has some notable successes. Coming next month: Season 5, which has the last set of short story adaptations (until they finally get around to filming The Labors of Hercules).
Posted by The Passing Tramp at 8:55 PM