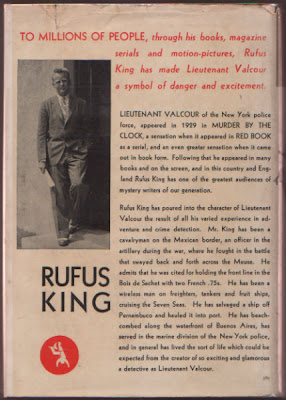 Both Cole Porter, born on June 9, 1891 and Rufus King, born on January 3, 1893, were only children of wealthy parents and attended Yale University in overlapping years.  The families of both men intended that their Yalies become respectable lawyers, but it didn't quite pan out that way.

Both Porter and King took to the musical in a big way while at Yale and they became key members--and in their respective senior years, presidents--of the Yale Dramatic Association (King also was a member of the Elizabethan Club, dedicated to conversation, tea and literature, and the Pundits, the senior prank society).

When King came to Yale the precocious Porter already was writing musical plays for the YDA.  "Rufe" King, who was adept among the all-male membership at playing women's parts, became one of the YDA's star attractions (about King, another member of the YDA, Arnold Whitridge, wrote the following--no doubt envious!--couplet: "Little Rufe King couldn't teach me a thing/I'm the Queen of the Yale Dramat").

Perhaps the best known Porter play in which King starred was And Still the Villain Pursued Her (1912), a send-up of Uncle Tom's Cabin and nineteenth-century melodramas.  King's friend, the future Oscar-nominated actor Monty Woolley played the villain, while King, age nineteen, took the heroine's part. 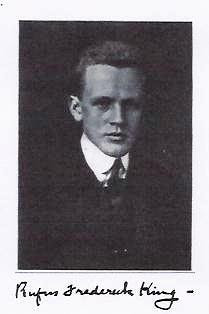 Here's an except from Porter's song (sung by King) "The Lovely Heroine":

Oh gee! It's heaven to be the lovely heroine.
All the men woo me
And try to undo me
But that's not my line.
I live so far from New York
I faint dead away at the smell of a cork.
Why! I'm such a child I believe in the stork!
For I'm the heroine.

Wooley's lyric from "I'm the Villain" naturally was a mite more pugnacious:


Oh, I'm the villain,
The dirty little villain;
I leave a pool of blood where e'er I tread,
I take delight
In looking for a fight
And pressing little babies on the head
Till they're dead.

Little Rufe King was much in demand for women's parts.  In other Porter musicals King sang the numbers "Oh What a Lovely Princess" (Years have I waited for someone adorable/So far my luck is deplorable) and "The Prep School Widow" (I find that school boys offer more/than many a college sophomore).

In 1914, King was planning to enroll in Columbia Law School (surely a loss to musical comedy), but instead he steered another, more unexpected, course.

King spent a couple years at sea as a shipboard wireless operator, enjoying a "romantic life of rolling ships and strange ports" (and obviously picking up a lot of maritime knowledge that would figure in many of his later novels).  He also worked a year in a Paterson, New Jersey silk mill, before serving as an artillery lieutenant in World War One.

After the war King was employed for a time in the maritime division of the New York police, before achieving success in late thirties as a mystery novelist.  All in all, surely one of your most interesting mystery author backgrounds!

Now what, oh what, does John Dillinger have to do with any of this (admittedly it's a little hard to see the notorious public enemy performing star turns in musical comedy)?

Well, in April 1934, Dillinger and his gang were holed-up at the Little Bohemia Lodge in the upstate Wisconsin village of Manitowish Waters.  The lodge owner's wife managed to get a letter to the FBI, which launched a badly botched assault on the building, in the process killing a bystanding Civilian Conservation Corps worker, but failing to capture or kill Dillinger or any members of the gang.


Evidently a good businessman, the owner of the lodge, Emil Wanatka, sought to get as much publicity out of the bloody shoot 'em up as he could.

Besides selling his story to Startling Detective Adventures ("I Was Held Captive by Dillinger and Saw Him Blast His Way to Freedom"), Wanatka proudly pointed out to visitors the bullet holes in the walls and windows of his lodge and displayed Dillinger possessions that he said he had found in the small cottage adjacent to the lodge where Dillinger had stayed during his brief but memorable visit (Wanatka also faked a photo of him and Dillinger together; see below).

These Dillinger possessions included, besides the odd gun or two, two books: John Fox. Jr.'s The Little Shepherd of Kingdom Come (originally published in 1903), a popular Civil War novel, and, yes--you've surely guessed it by now--a Rufus King mystery, Murder on the Yacht (1932).

So was our man Dillinger a fan of Rufus King, an author who "to millions of people" had made-- according to the enthusiastic publicity people at King's publisher Doubleday, Doran--his detective "Lieutenant Valcour a symbol of danger and excitement" (obviously Dillinger didn't get enough danger and excitement in his life already)?

It may well be so--though surely a true crime fiction addict would have dashed back to that cottage and grabbed the book before eluding the clutches of the FBI. Surely one just can't go and leave a Rufus King novel unfinished!

Dillinger must have finished reading Murder on the Yacht before the boys from the bureau started shooting.  Or maybe he waited to make his escape until he finished the last page ("Just one more page, Floyd!").

Note: Pictures One and Four are courtesy of Bill Pronzini.  Dillinger and his gang also attacked a state police arsenal in Peru, Indiana, birthplace and boyhood home of Cole Porter, oddly enough.  Did Rufus King ever visit Peru, Indiana?  I'm on the case!

Meanwhile, see my recent review of King's classic Murder by Latitude (1930) here.  A review of King's Murder on the Yacht is coming, along with reviews of Ellery Queen, Rex Stout and Max Alan Collins. TPT
Posted by The Passing Tramp at 3:50 PM