Visitors to this blog may know I have a certain interest in American regionalist and local color mysteries. I was born in South Dakota and grew up in Alabama and perhaps on that account have always found books set in so-called Middle America especially appealing. Maybe it helps too that I have fond memories of milk shakes at Dairy Queen, the ubiquitous fast food palace of small-town America. 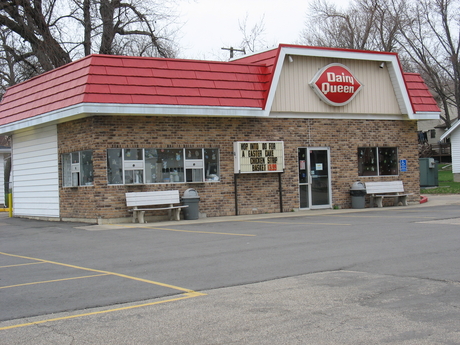 On this blog I have reviewed Golden Age detective novels set in rural Arkansas, rural Iowa, Wichita, Kansas and Dallas, Texas, as well as one by Oklahoma Choctaw Indian writer Todd Downing (whose books will be reprinted this fall).  For today I want to write about a modern local color mystery author, the Anthony Award winning Bill Crider.  I focus here on this prolific writer's Sherriff Dan Rhodes series.

Bill Crider's nineteenth Dan Rhodes mystery, the enticingly titled Murder of a Beauty Shop Queen,  has just been published, but here I am reviewing the thirteenth, A Mammoth Murder (2006).  Crider's Sheriff Rhodes novels are set in Blacklin County, Texas, a quirky little place with a really rather remarkable number of murders.

A Mammoth Murder is what I would call a southern country cozy.  It does with Texas what M. C.  Beaton's Hamish Macbeth series does with Scotland or Rhys Bowen's Constable Evans series does with Wales. I give the nod to Crider, though I must admit I am partial to a mystery that includes not only a Dairy Queen but a Jolly Tamale (the only Mexican restaurant in Clearview, Sheriff Rhodes' town).

The strong sense of place and Crider's gentle sense of humor are a great part of the novel's appeal.  The sheriff's interactions with his wisecracking co-workers and his dogs Yancey and Speedo, his visits to the Dairy Queen for life-sustaining Blizzards (ice cream with broken-up Heath Bars), his fondness for Dr Pepper in glass, his dislike of cell phones--all are a delight to read about in A Mammoth Murder.

Rhodes went first to the new Dr Pepper machine, which he didn't like at all.  For as long as could remember, he'd been able to get Dr Pepper in glass bottles from an old machine that, he was forced to admit, had seen better days.  But when it had broken down a month or so ago, it had been replaced by a garish new eight foot monstrosity that looked more like some kind of futuristic jukebox than a soft drink machine.

Not that Rhodes care much about its appearance.  What mattered to him was that it dispensed Dr Pepper in large plastic bottles.

The plastic bottles were better than cans, of course, and there was quite a bit more Dr Pepper in them than in a can or the old glass bottles, but the fact was that Dr Pepper just tasted better in glass.

Taste, Rhodes supposed, was relative.  He had never quite recovered from the big changeover to the use of corn syrup instead of sugar as the sweetener in his favorite drink.  A lot of years had gone by, and by now he should have adjusted.  Others may have been able to, but he hadn't.

He was sure that a spokesperson for Dr Pepper would maintain that the taste was unaffected by the change, but Rhodes knew better.  At least one bottler, in Dublin, Texas, still made Dr Pepper the old-fashioned way, and Rhodes had once ordered a case of the "real" ones and had it sent to him.  He'd parceled out the drinks out over a month or so, enjoying every sip.

Now, however, Rhodes had to settle for what could get, and that was a big clear plastic bottle, dispensed with such a clunking frenzy that it was well shaken by the time it arrived in the slot.  He had to wait a couple of minutes before opening it to be sure it didn't fizz all over his hand and the courthouse floor.

While he was waiting, he bought a package of orange crackers with peanut butter filling from another new machine.  When the crackers fell into the bin, Rhodes got them out and went to his office.

He brushed away a spiderweb that dangled from a light fixture.  He was going to have to come in more often.

Rhodes sat in his chair and put the crackers on his desk while he opened the Dr Pepper.  It fizzed, but only a little.  He took a swallow and opened the crackers, thinking that he really needed to do something about his eating habits.

I like the laconic humor and I share the nostalgia.  I recall Dr Pepper in glass bottles as a kid back in the 1970s and damn straight, they are better!  I've never been able to bring myself to try those orange crackers with peanut butter, however.  They are awfully orange!

There actually is a fair play mystery in this novel too, let me hasten to add (and a more serious resolution than one might initially expect).

Many local color mystery writers might slough off the actual mystery part of the mystery novel, but not Bill Crider in A Mammoth Murder (the astute reader will watch those authorial digressions closely).

We are presented with an old missing persons case and two present-day murders, all centering around Big Woods, where there have been Big Foot sightings and unearthings of fossilized Mammoth teeth.

And then there are those packs of marauding feral pigs....It's a quirky place, is Blacklin County!
Posted by The Passing Tramp at 11:13 PM