News comes tonight of the death of American author and essayist Gore Vidal, at the age of 86.  An important figure in the the history of American intellectual culture, Vidal of course will be eulogized (or pilloried, in some cases) for works other than the three detective novels he wrote in the 1950s under the pseudonym Edgar Box.  However, this is a mystery blog, so I will commemorate Gore Vidal by writing about Edgar Box.

I happened to blog the first two Edgar Box mysteries back on May 10 (Gore-y Death) and May 17 (Country House Murders of Edgar Box) of this year.  But I never got around to blogging the last Edgar Box novel, Death Likes It Hot (1954), dubbed at the time "a first-rate comedy of manners" by American mystery critic Anthony Boucher.  So here I take the opportunity of doing so.

As I indicated in Gore-y Death, I think Vidal rapidly strengthened as a detective novelist over the course of writing his three Edgar Box mysteries.  His first, Death in the Fifth Position (1952), paints an amusing (and for the 1950s surely sexually titillating) portrait of the New York ballet world, but as a true detective novel it is rather a bust. His second, Death Before Bedtime (1953), which is effectively a closed location, classic country house detective novel (though set in Washington, D. C.), tones down the sex a bit (especially the "alternative" aspect of it) but improves the detection.  His third, Death Likes It Hot, carries on in the manner of Bedtime, but is better yet as a pure mystery.

The death of Peaches Sandoe the midget at the hands, or rather feet, of a maddened elephant in the sideshow of the circus at Madison Square Garden was at first thought to be an accident, the sort of tragedy you're bound to run into from time to time if you run a circus with both elephants and midgets in it.  A few days later, though, there was talk of foul play....

Well, darn it all, in this novel our hero, debonair public relations he-man Peter Sargeant, never does get involved with this particular case!

It seems Mrs. Veering, wealthy Long Island matron, is determined to be the next big thing in Hamptons hostessing, so she hires Sargeant to help her map out a strategy campaign.  Soon Sargeant is on the Long Island Cannon Ball Express, on the way to his client's current country house party, where murder quickly strikes (a suspicious ocean drowning of one of the guests).

Hot is filled with acidulous humor, as any Edgar Box reader by this time had no doubt come to expect.  The novel actually reads rather like the love child, so to speak, of Agatha Christie and Raymond Chandler! 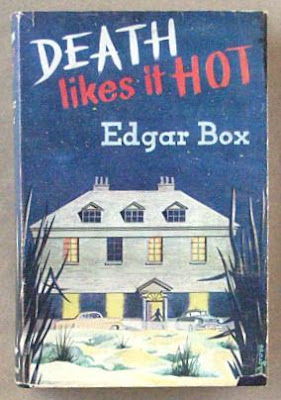 As another murder follows the original murder, an interesting plot develops, the best of the three Box books I would say.  Vidal even condescends to describe to layout of the house, which actually matters (though there really should have been a floor plan).  For good reason, as any fan of classical detective fiction will readily see, Vidal specifically references Christie in Hot.  In a New York Times interview from 2011 that concerned the Box novels, lately reprinted by Vintage Books' Black Lizard imprint, Vidal highly praised Christie, even lauding her ability to create interesting characters.  And in his 2010 preface to the Black Lizard edition of Hot Vidal freely admits: "This book is very much in the Agatha Christie vein."

But much of the fun too is in the satirical, sardonic narration of Peter Sargeant, who reminds me of a much less idealistic version of Chandler's great 'tec, Philip Marlowe.  It soon emerges that Sargeant's rich client is a pronounced dipsomaniac, rather reminiscent of a character in Chandler's mystery The High Window.

Vidal has a lot of fun describing Mrs. Veering--"a combination of Hetty Green and lush"--and her avid pursuit of liquid refreshment:

Mrs. Veering stirred her orange juice with her forefinger: I wondered what pale firewater it contained.  Probably gin, the breakfast drink. 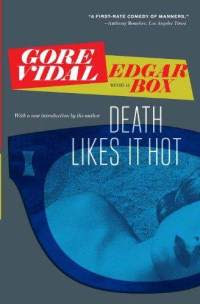 Vidal through Peter Sargeant also mercilessly mocks Mary Western Lung, noted children's author--her most beloved book is Little Biddy Bit--and hostess of Book-Chat.  Miss Lung is quite the coyly amorous type, putting the move on all the available men in the house, including the police sergeant sent to check on the first suspicious death. "[W]e talked mostly about books," she later admits of her tryst, er, interview with him.  "He likes Mickey Spillane."

In Death Like It Hot Vidal seems to have it quite in for "lady novelists" in general (Agatha Christie excepted).  Another target of his ire is "Francine Karpin Lock" (obviously Frances Parkinson Keyes).

Perhaps Vidal can be accused of a certain sexism in the Hot, but, on the other hand, the author-target in his previous book was Truman Capote!  And in Hot the male characters are mocked too (as well as bad grammar):

"What can I do you for?" were, I'm afraid, the first words the bereaved husband said to me when I joined him...."A martini," I said.

As is Hamptons society in general!  Here Vidal/Sargeant talks about what makes one part of the "nice" set at the Ladyrock Yacht Club:

Part of being nice means you belong to the Club and deplore the presence in the community of such un-nice elements as Jews, artist, fairies and celebrities, four groups which, given half a chance, will, they feel, sweep all that's nice right out to sea. 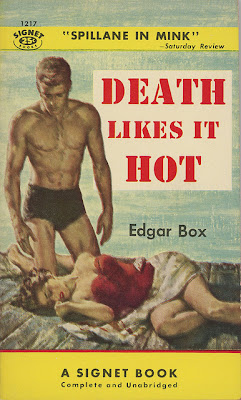 And, this being an Edgar Box novel, there naturally is an ample amount of sex that tales place between Sargeant and his current lady friend, rich girl Liz Bessemer.  There's a recurrent joke about how the amorous and uninhibited couple keep having sex in the most uncomfortable of locations. "You know, darling, there are such things as beds, old-fashioned as they may sound," Liz chides Peter at one point.

Eventually Sargeant collars a killer and order--of a sort--is restored on the Hamptons.  The rich can rest easy again.  The novel ends with the indication that Peter Sargeant may end up getting involved in that Peaches Sandoe circus midget case after all.

Sadly, however, we never saw from the hand of Gore Vidal a fourth Edgar Box detective novel, entitled, say, Death Clowns Around.

And now we never will.  But we at least have the three Edgar Box tales, with their moderately naughty depictions of fifties fun and crimes.  RIP Edgar Box.
Posted by The Passing Tramp at 12:51 AM