As I write this post Hurricane Isaac is making landfall in Louisiana as a minimal (75 mph) hurricane.  It's much a much weaker storm than Hurricane Katrina, but let us hope the rains it brings don't produce anything close to a repetition of Katrina's flooding in New Orleans.  I lived in Baton Rouge for some years and my thoughts are with you, Louisiana.

The second of Rufus King's trio of Lieutenant Valcour maritime mysteries--Murder by Latitude (1930), Murder on the Yacht (1932) and The Lesser Antilles Case (1934)--involves a hurricane.  Adding a natural disaster to a mystery seems an obvious way of increasing the suspense quotient, but Murder on the Yacht is the first case I am aware of where a mystery author does this.

The next year Ellery Queen produced in The Siamese Twin Mystery a tale of people trapped in a house on a mountain gradually being engulfed in a forest fire who just happen to have on their hands a murder case as well; while in 1934 and 1935, respectively, Todd Downing (whose favorite mystery writer was Rufus King) and Newton Gayle (an American-English duo) produced mysteries, Murder on the Tropic and Murder at 28:10, in which hurricanes played major roles in the story lines.  Since then, I suppose the device has been using many times, but these are some of the most important early instances.

In some ways, Murder on the Yacht is imitative of Murder by Latitude.  Valcour thinks a murderer is on board the yacht Crusader and he joins its voyage to try to spot the killer.  This time a smaller craft is involved, but still there is clear similarity between the two books.  Yet King succeeds in creating another fantastic mystery, full of suspense and genuine detection.

Also on the ship are Bettle's wife Helen (a society matron type who married Bettle in the classic exhange of position for money); their son John; Helen's dilettantish brother Wharton Luke; Horatio Barlowe and his lovely red-haired daughter Freda; Freda's companion Miss Singlestar; Peter Moore, nephew of Bettle's attorney Waverly Hedglin; and Carlotta Balfe, famous medium and spiritual guru of sorts to Anthony Bettle.  There's also a complement of crew, several of whom are quite nicely sketched in as individuals and not the usual comic "servant" throwaways that you find all too often in Golden Age mysteries.

Two-thirds of Murder on the Yacht passes before an "on-stage" murder takes place (although Hedglin's body briefly appears on a deck chair--or does it?), but this murder, of one of the passengers listed above, is a real doozy, occurring in a chapter that would have graced a first-class horror tale.

From this point on, this narrative never lets up and the suspense is something extra.  Soon the hurricane strikes and Valcour is left giving the traditional drawing room exposition in truly unique circumstances.

Characterization again is excellent, with each named person distinctive, and some quite memorable.  Dialogue is sparkling, descriptive writing evocative.

There's an interesting theme too about the hubris of the American moneyed class in the 1930s.  Rufus King himself came of money, of parents who lived in a posh Manhattan townhouse and wintered in Florida and could send him to a fine prep school and to Yale (where King most distinguished himself playing women's parts in Yale Dramat. musicals.); but in this novel, published in the early throes of the Great Depression, King takes a dim view of the mental effect that masses and masses of money can have on people: 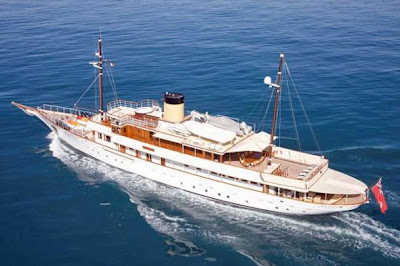 Porpoises looped slickly at the bows, looping, looping, strange projectiles hurtling, all with incredible swiftness and grace, an amusing circus with the Gulf Stream for their rings.  But Valcour was not amused.  Sunlight sank richly with its glow and heat, jading blue water and adding soft glitter to creaming crests, but he saw no beauty in it and felt no warmth.

He thought: Just as love makes you blind so does wealth, and of the two blindnesses wealth is the worse because of the incalculable harm it is able to do to people other than yourself.  Bettle was wealth.  And Bettle was stone blind.

This is mystery genre writing of unusual sophistication, either in the Golden Age or today or any other age, in my view.  Why on earth (or sea) have Rufus King's books dropped out of the canon?
Posted by The Passing Tramp at 3:39 PM