I plan to do a Life of Crime for the prolific English crime writer Doris Bell Collier Ball (Josephine Bell) (1897-1987), but Friday's Forgotten Book is falling fast upon us, so I am going ahead and doing the review of Josephine Bell's first and most highly praised detective novel, Murder in Hospital.

This book was reviewed a couple years ago by Elizabeth Foxwell, but Foxwell summarizes its plot up to a major revelation made around page 150, halfway through the novel; so in deference to people with spoiler concerns I'm not linking to the review, though I will refer later to some interesting points she makes in it.

Doris Bell Collier Ball was really quite an interesting and accomplished person.  The daughter of Joseph Collier, a distinguished doctor who died at the age of fifty when she was but eight years old, Doris Collier herself attended the Godolphin School (Dorothy L. Sayers was a classmate her first year), Newnham College, Cambridge and the University College Hospital in London.

Doris Collier married a fellow doctor, Norman Dyer Ball, and the couple had four children, in addition to maintaining a joint practice in the pleasant city of Guildford, Surrey, where they had moved (they must have been lived in fairly close proximity to Freeman Wills Crofts).

Tragically, Norman Dyer Ball was killed in 1936 when a car he was driving (or he may have been the passenger) collided with a lorry.  Doris Collier Ball was left to support their children alone. Losing her husband when he was only forty must have been made even worse by the knowledge that she had lost her father when he was only fifty.  These were bad blows, but they didn't break Doris Collier Ball.

In addition to continuing to practice medicine, Ball began a life of crime writing, under the pseudonym Josephine Bell publishing Murder in Hospital a year after her husband's death, in 1937.  The book is dedicated to TO THE MEMORY OF N.D.B.  This was the beginning of a very long fiction writing career for Ball (she would publish her forty-fifth and final crime novel at the age of 85 in 1982).

Murder in Hospital is a remarkable detective novel in many ways. It's one of the best and most authentic British "workplace" mysteries of the 1930s, the most famous example of which today probably is Dorothy L. Sayers' Murder Must Advertise (1933).  Clearly in the novel Bell is drawing on her experiences at London's University College Hospital.

Murder in Hospital also is a fascinating precursor to P. D. James' great nursing school mystery, Shroud for a Nightingale (1972).  I repeatedly found myself thinking, when reading this novel, "this is like P. D. James."  To be sure, Hospital is not nearly so bleak as James' books, yet there is a sort of formal and sardonic eloquence to the narrative that definitely brings Baroness James to mind (worth noting is that P. D. James also lost her husband and she went to work in hospital administration to support her daughters).

When Nurse Greenlow is found dead, strangled, her body dumped in a laundry basket at St. Edmund's Hospital, it's hoped by everyone at the Hospital that an outsider was responsible.  Unfortunately, lovely Nurse Greenlow had rather a winning way with men, and several young members of the junior staff who became enamored of her quickly emerge as possible suspects.

However, Inspector Mitchell's investigation begins to flounder and it is left to Medical Registrar David Wintringham, with the help of several other staff members, to find the truth about the death of Nurse Greenlow.  Things are more complicated--and vastly more sinister--than they first appeared.

I would love to discuss the solution to the mystery in this novel, but of course I can't.  However, I will say that the last chapter is a tour de force of irony that I am sure admirers of P. D. James would  appreciate (there's also a section detailing a confrontation between the Matron of nurses and a Sister that in its handling of sexual neurosis and misery is strikingly redolent of James' work).

One of the most interesting things about Murder in Hospital, which I can discuss, is the setting, at fictional St. Edmund's Hospital.  One really gets a strong feeling of what life in a 1930s London teaching hospital must have been like.

The many characters in the novel are not portrayed in depth, but strong general impressions will remain with readers of the lives of senior doctors, junior doctors, nurses, porters, patients and police (Inspector Mitchell is a stout bourgeois copper in the mold of Freeman Wills Crofts' Inspector French; he even has, like French, an underling sergeant named Carter--was this deliberate on Bell's part?).

All told, it is quite an impressive achievement, and rather unusual in a Golden Age detective novel, I think.


The social milieu is remarkably diverse for a Golden Age detective novel as well.  Since there are women and foreign-born students at the hospital, we get to see, unusually for the period, women competing in a professional capacity with men, as well as Asians and Africans as everyday people rather than the thriller villains we typically get in this period.

In her review of Murder in Hospital, Elizabeth Foxwell writes that in the book "Bell has interesting things to say about medical ethics, race relations and the position of women in medicine."  It certainly is true that the book's coverage of these matters is interesting; however, it's also bound to be controversial today and it's best, I think, for me to acknowledge this fact up front.

Josephine Bell better handles gender issues than racial ones.  Obviously she herself would have plenty experienced the former first hand, and she doesn't disguise the casual sexism of many of the men.

Noting that St Edmund's' nurses resent "the presence of women students at the Hospital," Bell observes "their fears were unnecessary; nursing was an entirely womanly occupation, a nurse's complete submission to male medical authority both becoming and gratifying...."  Conversely a woman doctor was, "if plain,...a revolting object" to the men, "if beautiful, a source of terror to all but the most intellectual."

It's easy to imagine the sardonic observations of P. D. James here, I think, concerning the matter of male insecurity about competing in the economic arena with women.  We know James read Sayers' Gaudy Night when she was sixteen; is there any chance that around the same time she read Murder in Hospital?  It would definitely have been fitting.


Bell also does a good job conveying the St. Edmund's nurses--as the Illustrated London News wrote, "the Matron is magnificent"-- and the patients.  The latter are working class Londoners, and their interactions with the Hospital staff are of great interest.  Unfortunately, Bell is less successful with the West African staff member, Livingstone.

In a sequence where the junior staff "rags" the newspaper reporters who have invaded St. Edmund's (this sequence is quite convincingly done, suggesting that Bell knew about such rags first-hand), Livingstone plays a major role, much to the delight of his colleagues, but in the celebration afterward he becomes "very drunk," sings "several native songs," draws out "a large and wicked-looking knife from his pocket" and expresses "a desire for blood" (he is, we are told, "disarmed without much difficulty and taken home to bed").

A couple white staff members casually use the n-word (or a variant) in referring to Livingstone, while the lead character, David Wintringham--he would serve as Bell's series detective in a dozen novels, from 1937 until 1958, when his creator unceremoniously dropped him--after the great rag of the journalists gives Livingstone "a friendly but sufficiently distant nod," thinking that it won't "do to let the fellow get to uppish."  Ugh.

This sort of thing doesn't stop with Livingstone.  Sir Frank Jamieson, the most eminent doctor at St. Edmund's, admired and beloved by all, thinks, as he looks over a group of students, about how much he prefers Tom Ford's "six feet of handsome brawn and his cheerful smile" to "Samuelson's shining black curls and encyclopedic replies."  The whiff of antisemitism here on Sir Frank's part is unmistakable.


There also is considerable classism to be found in the staff, and it's not clear just where the author's sympathies lie.

In the novel there is recurring antagonism between the public schoolers and the lesser beings who weren't so blessed to attend such institutions. Tom Ford, who is old money and country and the star of the Hospital's rugby team and who comes off like a character out of a Bulldog Drummond novel, is particularly disliked by some students.

I couldn't really blame them personally, but I got the impression that Bell, like Ngaio Marsh in some books, was more concerned with the problem of "inverted snobbery" (i.e., lower class people prejudiced against upper class people).

Even the women get involved here, when, during, the rugby game a genuinely likeable woman doctor, Rachel Ludwick--she is one of the people who helps David in his investigation and is also one-half of an appealing little love story with another doctor--and Jill Blackthorne (David's fiancee, not so likeable, I thought) look down their noses at the date another doctor brings to a rugby match.

She's lovely, but not quite out of the same drawer as Jill and Rachel, it appears.  "Clothes just a little too smart," thinks Rachel, "and heels just a little too high"; whereas Jill bluntly pronounces: "Her figure makes me faint with envy, but her voice brings me to again." 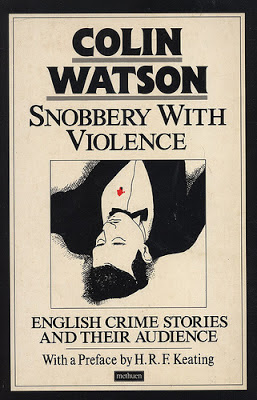 This brings us to the whole vexed matter of the social attitudes found in some Golden Age detective novels.

Dorothy L. Sayers and Agatha Christie have been decried for instances of antisemitism in their work, and all the Crime Queens (Sayers, Christie, Marsh and Margery Allingham) have been judged guilty at various times of classism (or in plain words snobbery).

Criticisms of these writers (and also Josephine Tey and Georgette Heyer) have not prevented them from being reprinted over and over again, however (sometimes with offending comments shorn from the texts).

I think it must be recognized that Bell's portrayal of these social prejudices may well be an accurate depiction of attitudes of that time and place, making the book a fascinating social document. It would be idle to pretend that these prejudices didn't exist.

Nevertheless, to a modern audience of mystery readers, Bell's cast of amateur detectives may not be as sympathetic characters as they likely seemed to many in the 1930s.

"Sadly," writes Elizabeth Foxwell, "Murder in Hospital is out of print."  I agree this is sad, but I recognize that some of the matters discussed above might make the book unpalatable to some publishers, who like to avoid controversy (at least controversy of that sort).

Unfortunately, Murder in Hospital, along with Death on the Borough Council and From Natural Causes, is one of three pre-WW2 Josephine Bell novels that was never reprinted in the United States.  All three of these titles are very rare indeed today.  All of them, however, are interesting mysteries that have long merited reprinting.

Note: I'll have some more material up soon on Josephine Bell, Anthony Gilbert and Christopher St. John Sprigg, along with, finally, reviews of some new stuff!  TPT
Posted by The Passing Tramp at 6:26 AM