Leo Bruce's 29th detective novel--21st in the Carolus Deene series--was titled Death by the Lake.  It was published in 1971.  Two Carolus Deene mysteries followed in 1974. Unfortunately Death by the Lake is an extremely rare book, but presumably Academy Chicago may reprint it someday (there seems to be some indication on the internet that it actually was reprinted by AC in 2003, but I think this is an error).

At the time Leo Bruce was writing Death on the Lake, he was growing increasingly restive with the apparent inability of his publisher, W. H. Allen, to sell more copies of his mysteries.  He even contemplated bringing back his first series detective, Sergeant Beef, who had not appeared in a novel since 1952 and a short story since 1957; but his editor, after reading a copy of the classic Sergeant Beef novel Case for Three Detectives, offered the opinion that enjoyable as Beef was, he was a relic of the past who could not be successfully revived in modern England.

So Bruce carried on with the gentlemanly Carolus Deene, but he made some changes in Death by the Lake.  When the novel opens, we learn that after twenty-five years Carolus Deene has retired from his position as a schoolmaster at Queen's School, Newminster, and moved to the village of Millgrove Water, apparently located in the Lake District.

Deene's attendant couple, Mr. and Mrs. Stick (housekeeper and handyman, respectively) come with him and we get a bit of characteristic Leo Bruce humor concerning Mrs. Stick's bourgeois aversion to murder cases (Deene's former headmaster, the splendidly pompous Mr. Gorringer, also makes a cameo appearance); but overall the book is lacking in the mirth typically associated with the Leo Bruce books.

Deene, a longtime widower, also becomes mildly romantically interested in Marie Morton, a woman involved in the murder case he starts investigating in Millgrove Water, but this romance isn't very forcefully presented (Carolus--presumably past fifty by this time--and Marie tell each other they are "fond" of each other, but they never get beyond this stage).

I don't feel the heart of Rupert Croft-Cooke, the man who was Leo Bruce, was quite in depicting a Carolus Deene romance. Be that as it may, however, he was trying to keep up with the times.  Even P. D. James' morose and introspective Adam Dalgleish, for example, had a romantic life, alluded to here and there by the author.

Many of the later Leo Bruce novels are quite short.  Death by the Lake surely is one of the shortest (my estimate is about 57,000 words, which barely gets it out of the novella class).  Personally this doesn't bother me, though it goes against the modern appetite for mammoth mystery novels. 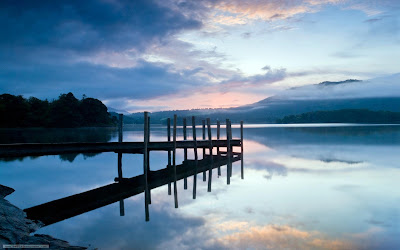 Given the brevity of the novel and Bruce's characteristically fluid writing, Death by the Lake makes for an enjoyable quick read.  There is an interesting past murder case that Deene digs up (he first hears about it at the pub, naturally), involving the disappearance five years earlier of a village couple.  Once Deene starts investigating this past case, a new murder follows.  There is the characteristic Leo Bruce twist, although in this case, it must be admitted, I saw most of it coming.

Though not a masterpiece by any means, Death by the Lake should be read with enjoyment by classical English mystery fans in general and Leo Bruce fans in particular.  Let's hope it becomes more widely available.
Posted by The Passing Tramp at 4:53 AM